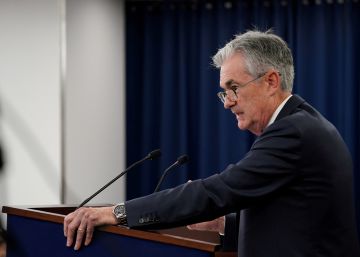 Third interest rate cut in the United States in three months. The Federal Reserve on Wednesday lowered another quarter point the price of money, to leave it in a band between 1.5% and 1.75%. It is a new attempt to try to stabilize an economy that shows a tendency to moderation. And although the president of the central bank, Jerome Powell, is cautious in indicating future movements, he prevents his strategy from being cornered as a year ago, when the plan was to withdraw the stimuli.

The Fed's decision counted on the vote against two members, who preferred to leave the rates intact. The contraction registered in the manufacturing sector due to global economic weakness and uncertainty over the tariff war with China were so far the clearest justification for taking this new step towards lower rates. The hiring is attenuated and consumption shows the first signs that families begin to tighten their belts.

The rate reduction was agreed on the same day it was learned that the economy expanded at an annualized rate of 1.9% in the third quarter. A growth in the environment of 2% is considered solid and Powell sees "potential for improvement." There are, in any case, a greater number of members concerned about how to maintain the expansion. If the trend towards moderation continues, therefore, it could force a further cut in December.

The possibility, in any case, is currently 20%. The smart thing now for the Fed, analysts agree, is to be vigilant and not play until April. That would imply that Powell leaves the automatism in the decisions and the strategy will be more dependent on the evolution of the data. It would be, therefore, a return to patience. Several members, such as the presidents of Chicago and Dallas, have already publicly indicated that they are comfortable at this level.

The only point of uncertainty in this meeting was going to be rather the tone of the message he was going to resort to in the statement and then Powell at the press conference. The Fed proceeds to eliminate the phrase in which it said it would do its best to sustain the expansion. The low pressure on the side of inflation however gives you room to be patient. The change in the wording prevents the Fed from committing to the next move.

"We believe that monetary policy is in the right place," Powell told a news conference, while reiterating the Fed's commitment to sustain the expansion. The current level of rates, he insisted, provides "significant support" to the economy and explained that some risks were relieved, in reference to Brexit. The monetary strategy, in any case, does not follow a predetermined score and guarantees that it will react to any deviation in the outlook.

The stimulus effect of the rate cut, in addition, is usually reflected in the real economy after several months, so the last sales will not be noticed until 2020. It is the argument used precisely by the White House, but conversely, when point to the Federal Reserve as responsible for the moderation that was seen throughout 2019, because the hike took too fast and too far.

Powell insists that these rebates are a mid-cycle technical adjustment. It is a tactic reminiscent of what was done in 1995 and 1998, when three quarter-point cuts were made as a protection. The Fed president tries to go ahead of the process of weakening and avoid entering a recession scenario like Europe. The last reduction, in addition, is a recognition that it went beyond a neutral position when it rose in 2018.

Interest rates, in any case, is not the only mechanism the Fed has in place to prevent a relapse. Three weeks ago he reactivated the purchase of Treasury bonds to expand the balance sheet and respond to liquidity needs in the short-term debt market. It is doing so at an initial rate of $ 60 billion per month until it enters the second quarter of 2020.

Powell already made it clear that it is not a reduction of rates by the quantitative route and that the objective is to reduce the tension. He also did not specify at what level he would like to take the reservations. The Fed also extended daily asset repurchase operations to maintain the flow of liquidity and prevent tension from splashing into the real economy or affecting the confidence of companies and consumers.