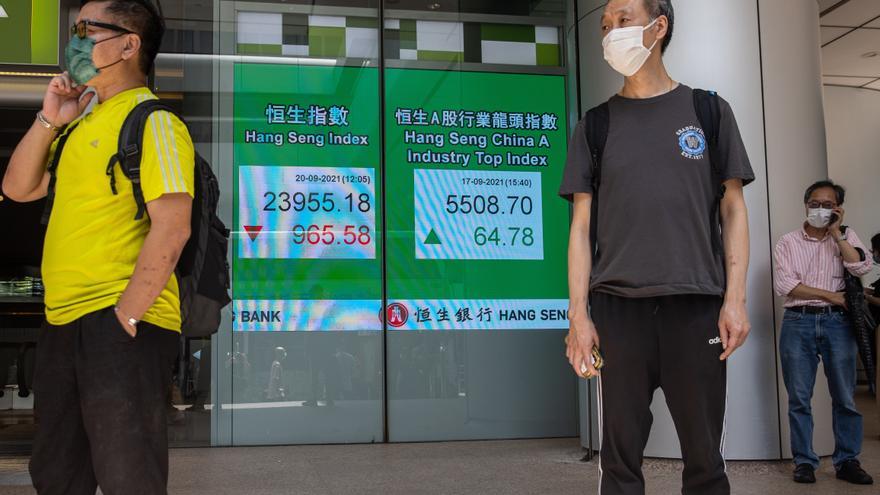 Investors’ fear of the bankruptcy of the Chinese real estate company Evergrande and its contagion to the global economy has marked the day in the world stock markets. Hong Kong’s Hang Seng index has fallen 3.3%, impacted by the hit in the stock market of Evergrande (-10.24%), one of the largest real estate developers in the country, on the verge of eventual bankruptcy, which has caused widespread uncertainty in the stock market that has led to losses in most stock indices.

At the end of August, Evergrande acknowledged the risk of incurring default due to difficulties in obtaining the necessary liquidity due to the suspension of work on several of the projects developed by the company. The possibility that the Chinese property developer did not pay the coupon of a debt issue and caused a hole in bond investors made sales orders the trend of the day.

The Chinese real estate giant has a debt of 305,000 million dollars. The company last week warned the Chinese government of the risk of entering into insolvency proceedings due to the fault of two of its subsidiaries. As a result of the growth of the company, its founder, Xu Jiayin, became the richest man in China with a fortune valued at 42.5 billion dollars according to Forbes at the end of 2017, the year in which the market value of the shares Evergrande also reached its peak.

However, the success of the group hid a huge debt with which it had covered its expansion to other sectors such as health services, electric vehicles or even sports (in 2010 it took control of Guangzhou FC, one of the main teams football team).

In 2021, Evergrande had to cope with a drop in the value of new home sales and new real estate regulations by the Beijing government with the stated aim of fighting speculation. In a context of falling prices in the real estate market and an increase in debt, the announcement that the company would be unable to comply with foreign bondholders before the end of the term this Thursday for the payment of interest on its bonds abroad has led to panic to the stock markets of half the world.

Tourism values ​​have been boosted after the United States announced on Monday that it was lifting the travel restrictions that were in force in the context of the coronavirus pandemic, allowing the entry of international passengers from the EU and the United Kingdom since the beginning of November. who are fully vaccinated.

Interest on long-term Spanish debt fell to 0.33% and the risk premium stood at 65.4 basis points.