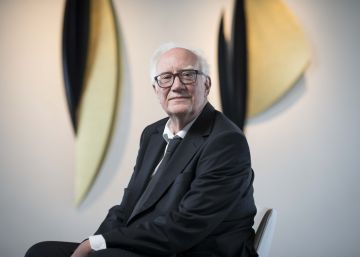 Professor Emeritus of the University of Uppsala, Edward Palmer is one of the parents of the Swedish pension system, which many see as a model of equity and sustainability. Although born in Denver (USA), Palmer has lived most of his life in Sweden. The attention given to his eldest daughter, born with cerebral palsy, made him an unconditional public health system of the Nordic country and, in general, of the European welfare state, subject on which he is writing a book. At 78, he has just joined the Forum of Independent Experts of the BBVA Pension Institute, composed of personalities of different nationalities from the academic and research world.

Question. What can we learn from the Swedish public pension system?

Answer. The most important lesson is that it is possible to create a pension system that is financially stable and that pays good pensions. Very simple (laughs).

Q. What should be done? The Spaniards of baby boom they will retire soon and live longer than their parents. In addition, Spain has one of the lowest fertility rates.

R. Making a pension system sustainable is a long-term issue. To begin with, we must analyze at what demographic moment the country is located. In the case of Spain, there is a very large group of people who will soon become pensioners and the extra money saved to cover the next bubble has been spent. In my opinion, it was an unfortunate decision. Probably everyone agrees with me, except for those who thought they were obliged to do so.

"In Sweden, people realized that when they were 50 years old, they could not play golf in Mallorca"

P. The politicians said there was no other option …

R. There may not be another option, but there are commitments to be made. When we designed the current pension system in Sweden, in the early nineties, we saved money thinking about those born between 1945 and 1955, the baby boom Swedish. We have had lean times, but politicians, fortunately, have not spent it. To fulfill the commitments made, two things must be achieved: that the new system be fair for all generations and that it be financially viable.

Q. Will working until 70 or 80 years old help solve the problem?

R. It is necessary to set a retirement age, but those who choose to continue working can also be financially compensated. A whole generation thought that he would be a pensioner at 63, but that will not be possible. Maybe they have to work until 68 or 69, and those who come from behind will have to do it even more years. Longevity will continue to increase in Europe, it is a fact. It is possible to convince people that they do not necessarily have to retire at 65 and the system can be designed so that part-time work can be combined with the collection of a part of retirement.

Q. Is that system working well in Sweden?

R. In Sweden each worker has a personal account to which he contributes during his working life. At the time of retirement you can, if you wish, continue working and collect the pension at the same time. You have the freedom to choose. I see it around me: people have accepted that this is how life is. Many Swedes work beyond retirement age in social services or healthcare, sectors that many workers demand. With 40 or 50 years one can perfectly train to work on new things. Being in a single job all your life is not a good idea.

"Spending (the reserve fund) Spanish was an unfortunate decision"

Q. Many people in Spain are convinced that their pensions will be lower than those of their parents.

R. The same thing happened in Sweden when we started debating pension reform. The message we tried to send then was that working longer allows you to have a better pension. Maybe if you are 25 years old this is no more than a fantasy, but as you turn years you realize that it is convenient for you and you see that people around you start doing it. With the reform we increase from 30 to 40 the years of contributions necessary to collect a pension. This forced a change of mentality: people realized that with 50 years could not go to live in Mallorca to sunbathe and play golf. In this way we manage to change the story and make the system sustainable. If we are going to live longer, why not work longer?

Q. Is the Scandinavian welfare state in crisis?

R. I think not. The best proof that this is not the case was given years ago The Economist, when he published a long article on the subject. On the cover of the magazine appeared a Viking with helmet, horns and beard with the headline "The next supermodel". It is very significant that a conservative publication says that is the way that the rest of the world should follow. The concern in Sweden now revolves around care at the end of life. The group of people born between 1945 and 1955 will be very numerous when they turn 90 years old. There is an open debate about how many people the health system will need to face it.

R. Sweden is a relatively egalitarian society and this has a lot to do with preschool education. Countries that spend more public or private money on smaller ones have higher fertility rates. This helps to free the woman and for men and women to share the tasks of home and care. It is essential to guarantee an equal starting point. Even the immigrants from Syria who have just arrived have that opportunity. Their children are immediately incorporated into the education system and that makes it easier for fathers and mothers to work. In this way the tax base is expanded and the necessary resources are generated to finance all this.