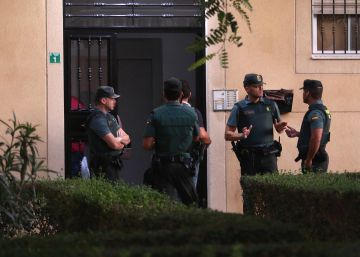 The Court of Violence against Women of Almería granted last Monday the guard and custody of the seven-year-old boy, Sergio, to his father after he requested to modify the measures in force since 2017 arguing "neglect" the child by his mother, A.M.B.L, who continues in the Civil Guard units detained as alleged author of violent death of the little one.

The father filed on September 6 of the same year before the court, which kept open a procedure for contentious union, the demand for the modification of the regime of guard and custody. The hearing, in public hearing, to hear the two parties was held on October 4.

In the course of that hearing, according to judicial sources, it was requested that the guard and custody granted to the mother with a regime of visits to the father be revoked alleging that he did not fulfill his motherly filial obligations and that when the child was with AMBL, 38 years, "I did not go to class, did not eat well or was not taken care of in conditions, with lack of hygiene."

"At no time were circumstances noted that supposed the existence of a vital risk for the child," said the same sources, while pointing out that the ruling that decided to withdraw the guard and custody of the mother is dated October 7 , so it was in the process of notification, without having been able to specify whether the detainee was already aware of the ruling when she allegedly took her son's life.

Sources close to the case have transferred that, in addition, this year, the Court of First Instance 8 of Almeria decreed the involuntary internment in Women's Mental Health. The admission lasted for nine days, after which he was discharged with a prescription for pharmacological treatment.

The litigation procedure was initiated in parallel with previous criminal proceedings on April 5, 2017, when A.M.B.L. He filed a complaint for alleged ill-treatment of his son's father towards her. The report of gender violence was negative and the proceedings were sent to the Criminal Court 4 of Almeria that issued an acquittal in February 2019.

Since the sentence was not firm, the Court of Violence against Women of Almería continued the contentious piece of measures on the child in common and, on January 23, 2018, it was granted definitively, after an agreement between the parties, the guard and custody of the mother and a regime of visits to the father was imposed.

"There was nothing that could suggest that there was a risk to the child's life because, in the process, there has always been allegation of neglect and no other circumstances," the sources have remarked.

Sergio's father, whose lifeless body was moved by his mother by car from the family home of Huércal de Almería to the home of a known in the neighborhood of Las Norias de Daza, in El Ejido, he also filed a complaint with the Court of Instruction 1 of Berja this year against Sergio's mother who It was finally archived although it has not been specified for what crime.