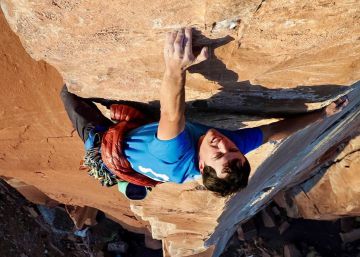 The immense aura of Alex Honnold hid a sosias, a young man, able to climb creepy walls without rope, strong enough to set speed records in the Yosemite Valley, free to live up to the day inside a white Honda Civic , debtor of the talent of John Bachar, Peter Croft or Dan Osman … and that he did not want, by far, to be as universally famous as the guy with whom he was compared at all times. Brad Gobright will never be Alex Honnold because he died on November 27 in an accident that many will call stupid: he descended rapping simultaneously with his friend Aiden Jacobson without noticing that he had reached the end of the rope, which lacked the mandatory safety knot. He was barely 31 years old. Both had rapped halfway through the 500 meters of the Shining Path, in Potrero Chico (Mexico) when they were precipitated in a vacuum. Jacobson saved his life with minor injuries when he landed on a nearby ledge, but Gobright bounced and was fired to death. Ironically, they studied the path where one of Honnold's most terrifying integral solos was filmed.

At the age of five, the parents of California Gobright tried to practice a team sport and tried among others with football. Brad climbed the goal while the rest chased the ball and a year later discovered climbing on a climbing wall. He never stopped climbing. Until just four years ago, only the closed circle of the elite of climbers that roams the walls of the American West knew and admired Gobright. The rest of the world was unaware of its existence, and only when in 2017 he and his partner Jim Reynolds broke the road speed record The nose, (Captain Yosemite), climbing its 1,000 meters of wall in two ridiculous hours and 19 minutes, the world of climbing knew that those two guys had immense talent. Of course, Honnold and Tommy Caldwell rushed to tidy up and left the record below two hours: 1h58m. Reynolds gave the bell last April, climbing and de-escaping the 1,500 meters of the Afanassieff road to the Fitz Roy without rope.

Often, the best climbers and climbers die in easily avoidable accidents, or because of tricks that are unthinkable. They are people capable of managing their gestures, dexterity, strength, resistance and mental control to the millimeter … until a brief disconnection leads to the great blackout.

Javier Alonso Aldama, 'Javo' was one of the best climbers of his generation, with an impressive curriculum that closed at age 23, after an accident suffered in the Alps in 1981 that separated him from his dreams and ended the life of two other superlative climbers: Marisa Montes and Manuel Martínez Moss. “But before, we went to climb Verdon, where most of the tracks are first rapped to climb them later, and when we reached the first meeting from the top, we met a Frenchman without a partner, without ropes. We thought he was climbing all alone, but he corrected us: he and his brother rapped simultaneously to gain time and a poorly executed maneuver ended his life, ”he recalled yesterday before reflecting almost to himself:“ years later, pride us keep losing. ”

Perhaps he referred to the arrogance of believing himself immune to fatality, an easy-to-understand feeling when the climber thinks he has everything under control and leaves the small details unfinished: knotting the ropes in a simultaneous rappel, checking the harness, reviewing the knots … forgetting the knots … Basic safety principles that are obviously ridiculous when climbing without a rope.

Honnold and Gobright climbed together in El Capitan, with rope, on several occasions, enough for the candidate impress the king. Honnold said goodbye through his social networks: “I guess there is something to be said about mountain safety and the risks inherent in climbing, but I don't think that really matters now. I am sad for Brad and his family, and for all those who were positively affected by his existence: it was a man's jewel ”…

Gobright was announced by the magazine Outside as "the next great climber in integral only", what came to say, the following Honnold. And that headline of the prestigious magazine momentarily resolved the money problems of a Gobright who worked four months a year of what it took to scale the remaining eight. The recognition would grant sponsorships, but also pressure, and there was debate between the need to live as well as possible to climb even better and the psychological bill or restriction of his freedom that notoriety could generate. Before anyone noticed his figure, Gobright had half a life climbing without a rope, like his admired Honnold, but perhaps he did not have time to assume that he was already (almost) as good as the best.