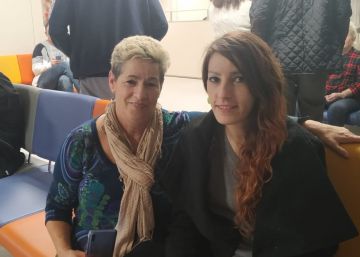 Ramona lives in the center of Madrid, but took advantage of having dinner with some friends in the south of the capital to go to the emergency room in a less crowded hospital, that of Fuenlabrada. It comes from a backache that has been suffering for a few weeks and has been waiting for a urine test for three hours. “I thought there would be fewer people here and it wouldn’t take long,” he says from one of the multiple waiting rooms. It is Wednesday and the emergency rooms of this, and many other hospitals, are crowded. The beep on the screen announcing the number of the next patient is mixed with the cough and sneezing of those who are still waiting. It’s Ramona’s turn. “Let’s see if it doesn’t take long now. Before it came even for a flu, but lately it takes a long time. It already happened. ”

Ramona gets up with difficulty and goes to his office. Meanwhile, Noelia devours her novel. “This time I came prepared because in emergencies it is always a matter of waiting too long,” explains the Madrid woman, holding her left hand with care. His dogs fought and hurt him when he tried to separate them. He barely has a couple of scratches but they decided to come to “check that everything is fine”, since they operated on that hand recently.

Both Noelia and Ramona have been classified as little urgent in the triage system that they use in Spanish hospitals. Once the patient arrives, he briefly tells what happens and, depending on the urgency, he is treated with more or less haste. Thus, resuscitation will find attention immediately. The emergency ones will be treated between 10 and 15 minutes after arrival; those of urgency, before the first hour. And those of minor or no urgency will wait between two and four hours.

For doctors, the feeling of attending to people without major emergencies in the emergency department is widespread. “There are times that I even take pictures of the reasons why they come,” says a doctor who prefers not to identify himself. “The number of patients who come to the emergency department although they should go for primary care is very high.” Among some of the descriptions per patient: “Dyspnea, mucus and fever for a couple of days”, “Feeling of a foreign body” or “Refers low back pain, seen yesterday by low back pain”.

“In the end we will have dinner here,” laments Maria, Noelia’s mother. “But it is still faster to do it through emergencies. If I go to the GP, between the time they give me an appointment, they send me to do an X-ray and then they take care of me again… I miss a week, ”adds Noelia. “Although I know that sometimes we do not make responsible use, I go to where they do something more complete and I can move forward,” María acknowledges with her eyes attentive to the screen. “Oh, run daughter, it’s your turn!” Noelia gives the book to her mother and enters for consultation.