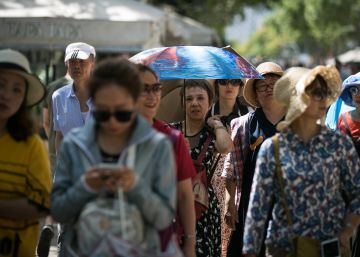 After eight months of continuous growth, the visits of foreign tourists in the month of May have shown a change of trend. In the fifth month of the year Spain received eight million international travelers, 1.6% less than in the same month of 2018, according to data published on Tuesday by the National Statistics Institute (INE). Part of this fall responds to the decrease in visits of two of the main issuers of tourists: Germany and France.

2019 showed an upward trend in the tourism sector. With considerable month-to-month increases – especially notorious in April for tourism generated during Easter – the sector was awaiting what could happen in the following months, when traditionally Spain competes with neighboring countries that offer lower prices. The 1.6% reduction breaks the positive streak started in September 2018, but it does not prevent an increase of 2.7% in the first five months of the year, to exceed 29.3 million foreign visitors.

As it has been registered in the past months, the highest percentage of tourists still coming from United Kingdom (1.9 million passengers), Germany (1.07 million) and France (1.02 million). What stands out from this month's data, however, is the considerable reduction of visitors from precisely these countries. The fall of the French is the most notorious with 10.7% fewer visitors than in May 2018. The number of Germans was reduced by 8.8%, while the British registered a small decrease in visits by 0.3%. But the country that most dropped its issuance of tourists to Spain was none of these three, but Switzerland, with 131,000 visitors that represent 31.3% less than last year.

The total expenditure made by foreign visitors in Spain was around 8.2 million euros in May, according to INE data. This supposes an increase of 0.5% with respect to the same month of 2018 and thus chains 10 months of growth. On the other hand, the average daily cost per tourist is 163 euros, with an interannual increase of 9.5%.

On the other hand, travelers from Russia and Italy registered a strong increase in 2019. In the first case, more than 120,000 Russians arrived in Spain, representing an increase of 34.8% compared to the same month in 2018. The Italians, for their part , exceeded 700,000 visits, growing 18.3% compared to last year. The United States also registered a rise of 7.2% to exceed 340,000 visitors, which continues with an upward trend in arrivals of travelers from that source. In the first five months of the year, more than one million American tourists have registered in Spain, which represents an increase of 14.14% over the same period in 2018.

As usual, most of the international visits were concentrated in a handful of autonomous communities. Catalonia registers the largest number of foreign tourists assuming 23% of the total, followed by Balearic Islands, with 21.4% and Andalusia, with 15.2%. Between the three they welcomed more than 4.7 million travelers, which supposes more than half of the total of tourists in Spain.

The forms of transport also recorded considerable negative data. While arrivals by plane grew by 1.1% in May, those made by road and by port were reduced by 14.9% in both cases. The hotels, on the other hand, grew by 5.6% in number of lodged until overcoming 5.6 million foreigners, while the tourist flats suffered a fall up to 16% compared to the 2018 data, with 742,000 visits.