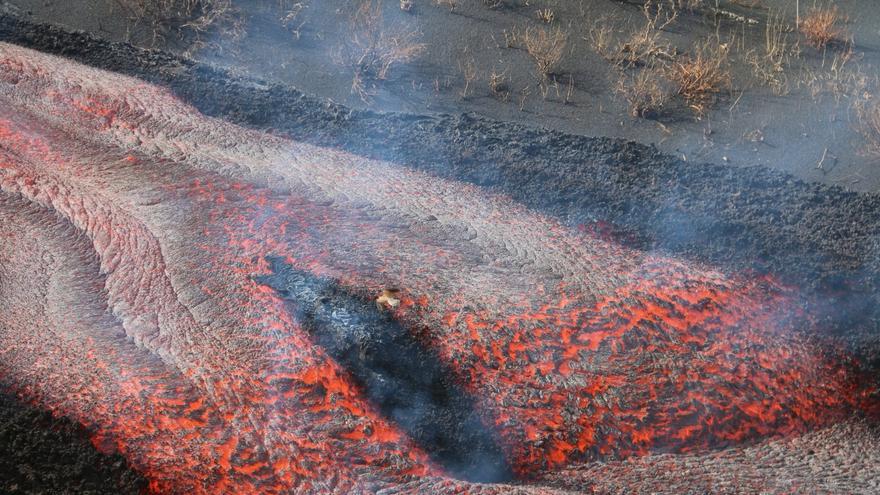 How much land has lava gained from the sea on La Palma?

The lava flow from the volcano of the Cumbre Vieja de La Palma reached the sea on Tuesday at 11:00 p.m., after ten days of eruption. The lava flowed through the municipalities of El Paso, Los Llanos de Aridane and Tazacorte, a municipality through which the magma finally collided with the salty water after falling down a cliff nearly 100 meters high. Since then the magmatic material has formed a lava delta or fajana that already occupies more than 475 meters of the coastline, reaches a depth of 30 meters and extends over an area of ​​27.7 hectares, the equivalent of almost 28 fields of soccer.

What is a fajana?

How are they formed?

When lava hits seawater it begins to solidify rapidly as more volcanic material continues to pile up on top. The accumulation of runny is gaining ground to the water in a fan shape as it opens out to the sea.

Are there more fajanas in the Canary Islands?

On La Palma there are already the Franceses and Barlovento. In addition, on the coast of Tazacorte there is one created by the San Juan volcano in 1949. This area was covered with several meters of land from La Palma tree summit and became one of the best enclaves for the cultivation of bananas in the Archipelago. On many occasions tidal pools form in the fajanas, for example in the natural pools of Las Calcosas, in El Hierro. In Tenerife there is a fajana in Punta del Hidalgo; in Gran Canaria, in the Barranco de Cardones; in Fuertevenura, on the coast of Jacomar; and in Lanzarote they can be seen along almost its entire coast, due to the Timanfaya eruption, which began on September 1, 1730 and lasted six years.

Who owns that territory?

The land that the lava from the La Palma volcano gains from the sea is automatically in the public land maritime domain, that is to say, property of the State. It is part of the national geological heritage and is subject to the Law of Natural Heritage and Biodiversity. The Coastal Law establishes that the lands or islands that are formed or are formed by natural causes in the territorial sea or in the interior waters of the rivers, to the extent that the tides become sensitive, belong to the state maritime terrestrial public domain. Therefore, these lands will be “inalienable, imprescriptible and unattachable.”

Is the formation of these coastal areas dangerous?

When the lava reaches the ocean it stays at about 1,000 degrees, while the sea temperature is just 20 degrees. This term shock generates columns of water vapor loaded with hydrochloric acid as a consequence of the significant chloride content in salt water. In addition, plumes of water vapor contain tiny particles of volcanic glass as a result of the reaction that occurs between lava and seawater. This vapor poses a danger to people who visit or live in the affected area and the winds in the area where these coastal volcanic plumes occur contribute to the dispersion of the gases. Inhalation or contact with these elements irritate the skin, eyes and respiratory tract, and can cause breathing difficulties, especially in people with pre-existing pathologies.

What precautions should be taken?

It is essential that those who approach the emission zone or live in the closest areas use FFP2 type masks; keep windows and doors closed and place a damp cloth in the slots; and avoid using air conditioners that are powered from outside.