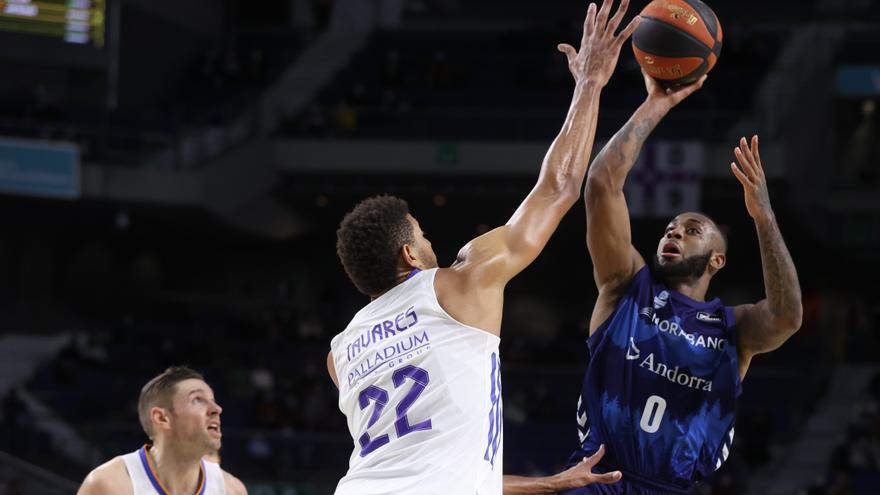 The MoraBanc Andorra worked a miracle this Sunday and, led by a great Codi Miller-McIntyre, surprised the leader Real Madrid at home in an exercise of faith and effort that allowed him to overcome the numerous casualties with which he appeared at the WiZink Center and leave behind the streak of five consecutive losses in the League (83-88).

The American point guard, with 28 points, seven rebounds, eight assists and a PIR of 34, led his team to a victory that allowed them to take a breath at the bottom of the table in David Eudal's debut on his bench. The game of the Andorrans had a lot of merit from start to finish, since they arrived very depleted, with only nine professional chips after Clevin Hannah joined at the last minute due to muscle problems.

After his double weekly commitment in Euroleague, Real Madrid took to the court at idle speed, without spark and with little success from the perimeter, which those from the Principality took advantage of to stand up from the start. The exchange of baskets lasted throughout the first quarter, in which the advantages of each other were minimal and the forces seemed even.

until Anthony Randolph started to hurt from all positions. The success of the American power forward -the most in tune with nine of the twenty-one points for the Whites in the first ten minutes- allowed the leader of the ACB to reach the end of a thick and unattractive first act for the spectator (21 -18).

After the restart, the shooters perked up and began to arrive the triples that until that moment were conspicuous by their absence. MoraBanc resisted by fighting and squeezing their diminished bench and kept slipping on the scoreboard, preventing their rival from escaping early.

Trey Thompkins and Gaby Deck, with eight and seven points in the second quarter, led the scoring for the Paul Lasso, while Vincent Poirier became strong in the paint and contributed with his four blocks to improve White's defensive performance. Opposite, Codi Miller-McIntyre took command of operations and, with eight points, kept alive those from the Principality, who only lost at halftime by four points (42-38).

A 0-5 run after passing through the changing rooms returned the advantage to the visitors many minutes later. Real Madrid kept napping and accumulating errors. His lack of tension was punished by a 1-12 run culminating in three-pointers by Drew Crawford and Moussa Diagne that gave him his maximum advantage up to that point and forced Pablo Laso to request time-out to wake up his players (48-55, min 25).

The measure seemed to have an immediate effect, although a new visitor arreon led by Miller-McIntyre and Crawford resulted in a 0-7 run in favor of the Andorran team. Against all odds, the leader lost by half a dozen points at the end of the third chapter (62-68).

Babatunde Olumuyiwa set off alarms by raising the Principality's lead to ten points with eight and a half remaining. It was time to go back to the whites if they wanted to avoid the third league defeat of the course, and little by little the gap was closing thanks to the hosts putting one more gear in defense and putting a little more order in their attacks with Deck as the most inspired man.

Two and a half minutes from the end the scoreboard reflected a 75-84 that made David Eudal's players dream. Then came a three-pointer from Heurtel followed by another from Causeur after stealing the ball that put the Whites within three points with 43 seconds to play, although MoraBanc knew how to handle the result in favor and managed to give the bell on the track where few bet on his success.

Incidents: Match played at the WiZink Center in Madrid before 3,579 spectators. A minute of silence was observed in memory of former Puerto Rican player Juan Ramón 'Johnny' Báez, who played for Real Madrid for three seasons.