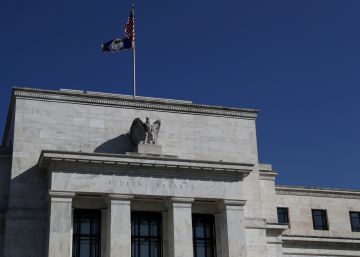 Donald Trump has applied two main economic policies. With regard to taxes, he has been an orthodox Republican and has introduced large tax rebates for companies and the rich, which, according to the promises of his Administration, would lead to a large increase in business investment. With regard to trade, he has broken the market policies (more or less) free of his party and has imposed high tariffs that, he promised, would boost a revitalization of US manufacturing.

Last Wednesday, the Federal Reserve (Fed) lowered interest rates, even though the unemployment rate is low and economic growth as a whole remains at a decent level, although not magnificent. According to Jay Powell, president of the Fed, the goal was to ensure some security in the face of worrying signs of a future slowdown; more specifically, the weakness of business investment, which has registered a fall in the last quarter, and manufacturing, which has been falling since the beginning of the year. Evidently, Powell could not openly say that Trumponomy has been a great fiasco, but that was the background of his comments. And Trump's frenzied efforts to pressure the Fed to apply major declines are an implicit recognition of the same.

To be fair, the economy remains quite strong, which is not really a surprise in view of the willingness of the Republican Party to incur huge budget deficits in order to prevent the Democrats from being in the White House. As I wrote three days after the 2016 elections "it is at least possible that major budget deficits in any case briefly strengthen the economy." And that's more or less what happened: there was a small bump in 2018, but right now we have basically returned to the growth rates before Trump.

But why hasn't Trumponomy achieved much, apart from budget deficits of billions of dollars? The answer is that both the tax cuts and the trade war were based on wrong views of how the world works. The faith of the Republicans in the magic of tax cuts is the zombie policy par excellence, a vision that the evidence should have annihilated decades ago, but still wandering around, feeding on Republican brains.

In fact, the background is incredibly consistent. Bill Clinton's tax increase did not cause a depression, George W. Bush's tax cuts did not lead to an expansion, Jerry Brown's fiscal pressure increase in California was not an "economic suicide," and Sam's experiment Brownback of lowering taxes in Kansas was a failure. However, Republicans insist. This time, the centerpiece of the tax cut was a huge respite for companies, which had to induce them to bring money invested abroad and put it to work in the United States. Instead, they basically used what they saved in taxes to buy back their own shares.

What has failed? Business investment depends on many factors, among which tax rates are placed towards the end of the list. Although a brief look at the facts could imply that companies invest heavily in countries with low taxes, such as Ireland, this is mainly a fiction: companies use accounting measures to declare huge profits and therefore large investments in tax havens, but these do not correspond to reality.

There has never been a reason to believe that lowering corporate taxes in the United States would result in an increase in investment and employment, and indeed, it has not happened. And what about the trade war? The evidence is overwhelming: tariffs do not have a big impact on the balance of trade as a whole. At most, they change the site deficit: The United States imports less from China, but imports more from other places like Vietnam. And there are reasons to state that Trump's tariffs have actually hurt US manufacturing. To begin with, many of them have affected “intermediate goods”, that is, the products that local companies use in their production processes, so that tariffs have increased costs.

Apart from that, the uncertainty created by Trump's capricious policy has surely discouraged investment. Why build a factory when who knows if next week a tweet will destroy your market, your supply chain or both? Now, none of these things has led to an economic catastrophe. As Adam Smith wrote in his day, "There is much ruin in a nation." Except in times of crisis, presidents care much less about the economy than most people believe and, although Trumponomy has failed miserably when it comes to keeping its promises, it is not bad enough to cause very bad damage. serious.

On the other hand, think of lost opportunities. Imagine how much better Americans would do if the hundreds of billions wasted on tax breaks for businesses had been used to rebuild the decrepit infrastructure. Imagine what we could have done with policies that will boost the jobs of the future in sectors such as renewable energy, rather than trade wars that attempt to recreate the manufacturing economy of the past in vain. And since everything is political today, let me say that experts who believe Trump will be able to win by selling a strong economy are almost certainly wrong. Most likely, he will not face a recession, but he has definitely not made the economy big again. So you probably have to do what you are already doing and clearly want to do: engage in racism instead.

Paul Krugman is a Nobel Prize in Economics. © The New York Times, 2019. Translation of News Clips