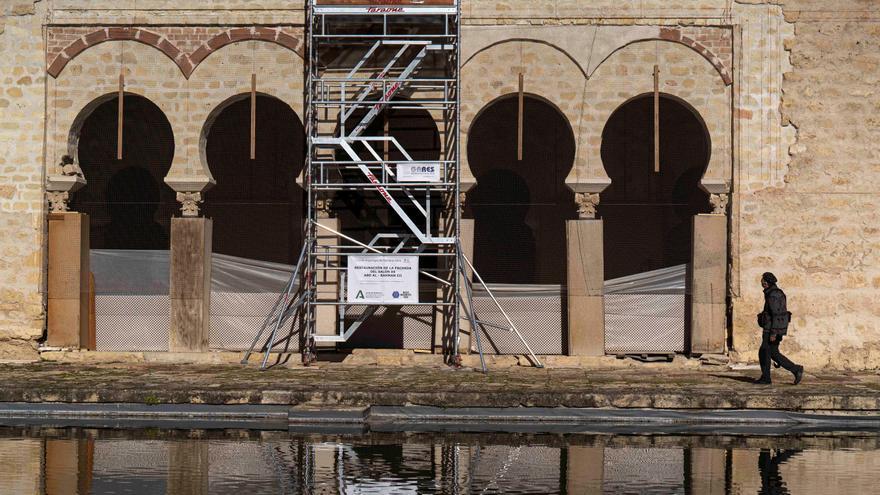 Córdoba, Dec 30 (EFE) .- The action on the façade of the Salón Rico is the “most complex” action that has been undertaken in the Medina Azahara archaeological site, in Córdoba, since seventy years ago “the architect Félix Hernández has been with an archaeological ruin and with tens of thousands of fragments “of atauriques.

This was stated this Wednesday by the director of the complex, Antonio Vallejo, during the visit of the Minister of Culture and Historical Heritage, Patricia del Pozo, to the site to learn about the evolution of the work that, with an investment of 125,000 euros and financed by the World Monuments Fund will be completed within one year.

Then, you will be able to see the façade of the Rico or Abderramán III Hall, the space of the caliph’s great receptions, as the investigations have concluded that it was, since, as Vallejo pointed out to journalists, “we don’t know what the facade, what we are going to transfer here is a scientific hypothesis, based on the original material, that is unmatched anywhere else. ”

This hypothesis has been developed because between 20 and 25 percent of the original material that is preserved “there are atauriques of all the elements that make up the facade to know what it was like.”

The fact of having found part of the cornice, of the voussoirs of the three arches, salmeres, spandrels and the different borders that make up the decorative organizations of each of these elements will allow “to complete the gaps, with copies, in order to have that original image of the building “, of which” we cannot look for a reference in any other monument, “said the person in charge of the site.

In fact, Antonio Vallejo said that Félix Hernández, who carried out the first major intervention in Medina Azahara in the 50s of the 20th century, “practically had to invent a methodology to see how he was assembling that puzzle and to which part each one of them belonged. those fragments “of the atauriques.

This is so because, as the director of the complex explained, “the façade is the most punished element (of the Salón Rico), as always happens in the buildings of Medina Azahara, all oriented North-South and the southern part is always the most historically punished for looting “.

The Junta de Andalucía has invested this year just over 600,000 euros in the archaeological site, which is a UNESCO World Heritage Site, and its budgetary forecast for 2021 amounts to around one million euros, in a “bet with all the consequences , in a certainly complex environment “, according to the counselor.

Although until the work on the façade is finished, it will not be possible to intervene inside, the Ministry of Culture and Artistic Heritage is working on the tender in parallel with these works so that in 2022 “to be able to start the rest of the action,” said the General Secretary for Cultural Heritage, Macarena O’neill.

They are, Patricia del Pozo specified, “costly actions” that the Board is willing to assume, and that O’neill specified that it is about proceeding on part of the flooring, part of the decorative replacement, the oriental canvas and the counter-façade.

The Board has not yet decided whether after completing the reconstruction of the façade it will open the Rico Hall to visitors, albeit partially, which will be assessed in due course, according to the health situation and the action plan inside , said the general secretary of Cultural Heritage.

Neither did the director of Projects for Spain of the World Monuments Fund, Pablo Longoria, clarify whether this entity, founded in 1965 by people concerned about the accelerated destruction of important artistic treasures throughout the world, will once again finance performances in Medina Azahara, although it did reveal that there is a project for the historic center of Córdoba in an advanced state of negotiation with the City Council, although neither he nor the mayor, José María Bellido (PP), also present at the visit of the councilor, wanted to specify its content.