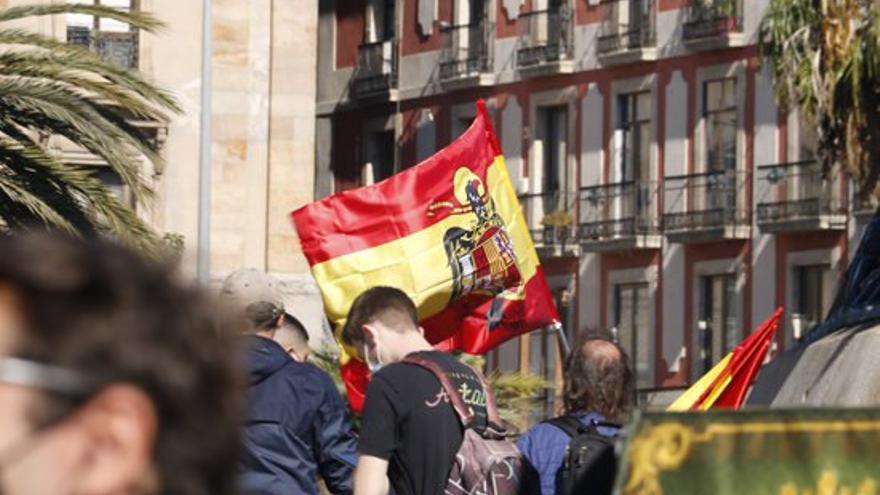 The extreme right this year has changed its traditional act on the Montjuic mountain in Barcelona for October 12 and has moved to the monument to Christopher Columbus in the Catalan capital. Several fascist groups have unfurled Francoist flags, have sung the ‘Cara al sol’ and have burned a ‘star’ made with photographs of the former president of the Generalitat Carles Puigdemont. At the end of the act, they made the Nazi salute, shouted ‘Sieg Heil’ and thrown “cheers” on the dictator Francisco Franco.

Some 400 people, according to the Guardia Urbana, have gathered at the monument to Christopher Columbus in Barcelona to celebrate October 12. They have done it in two acts, the first summoned by Vox and the Somatemps entity, and the second by Falangists and the National Identity Front – Spanish National Socialist Workers Party (FNI-PNSOE).

While Vox has organized an offering to the Virgin of Pilar at the foot of the statue of Columbus, the ultras have demonstrated with Franco and Nazi symbols and have carried out a parallel act on the opposite side of the monument in which they have clamored for the absolution of the assailants at the Blanquerna Cultural Center in Madrid.

The act of Vox and Somatemps began with the blessing of an image of the Virgin by a priest, who has claimed her as the “founder of Spain.” Subsequently, several people – including the Vox deputy in Congress Ignacio Garriga and Jorge Buxadé MEP – have placed yellow and red flowers on the stairs to form the Spanish flag.

In statements to the press, Garriga has assured that it is “especially important” to celebrate October 12 in Barcelona because the independence movement has tried to deprive the population “of Spanish Catalonia.” “For 40 years they have allowed the separatists to point at us, attack us and say that we cannot be proud with our flags,” he said.

The other concentration has been called by the National Identity Front, whose militants have carried Francoist flags and have called out for “Identity National Socialism.” Supporters of the Francoist Democracia Nacional have also joined. The participants have chanted chants demanding the imprisonment of the former president of the Generalitat Carles Puigdemont in addition to “cheering” on Franco.

Both events, which have brought together dozens of people with Spanish flags, have coincided with the march by car that has been organized through the streets of Barcelona. The drivers who have participated have expressed their support for the concentrations in Colón by honking their horns and displaying their flags from the windows.

An anti-fascist march has crossed the streets of Barcelona, ​​although the Mossos d’Esquadra’s device has prevented both marches from meeting.