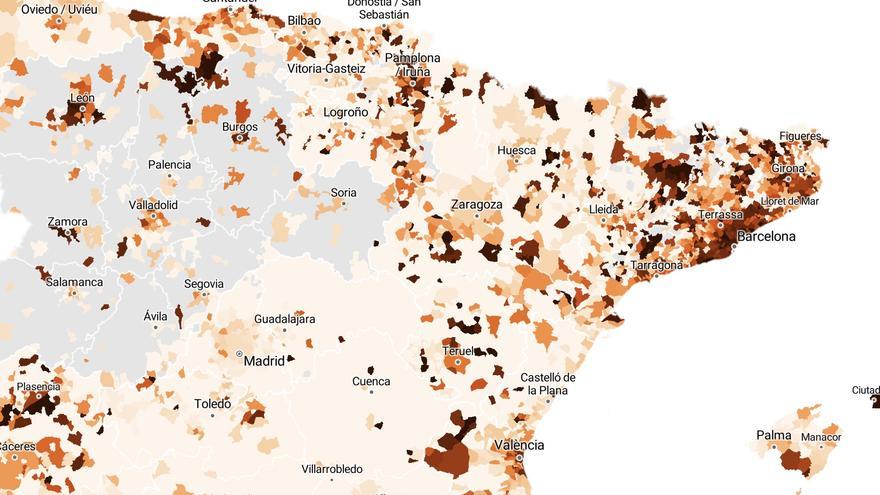 * Information updated with the latest data available as of July 6.

Increased transmission among young people in early summer has skyrocketed incidence rates in Spain. The change in trend already affects 4 out of 5 large cities (150 of the 176 with more than 40,000 inhabitants) with very strong increases, where infections have multiplied by three, four, five and even by nine in just two weeks. This rapid increase in incidence is only being registered in the population between 10 and 40 years old, the youngest age groups where the vaccination campaign has reached the least, which, in turn, present runaway contagion data.

The most extreme cases are located in eleven large cities with incidence rates above 500 cases per 100,000 inhabitants in 14 days. In the Barcelona city of Sant Cugat del Vallès, that of highest income in Catalonia, infections have multiplied by 4 in two weeks and they exceed 900 cases of incidence. They are followed by Barcelona (739), Zamora (708), León (683) and Santa Cruz de Tenerife (626). In some cities, the rise in infections has been dazzling: Zamora, which two weeks ago had an AI of 80 cases, today registers 739, infections have multiplied by 9. In Mislata (Valencia) they have risen 611%, in Mollet del Vallés (Barcelona), 547% and in Segovia, 450%.

By territories, Catalonia is right now the main focus of the coronavirus in Spain: 27 of the 50 cities with the most incidence are in its territory. This ranking is joined by many coastal cities in the Mediterranean, the Canary Islands and the western provinces of Castilla y León. These are some of the results extracted from the analysis carried out by elDiario.es based on data from the Health Departments of 17 autonomous communities and the autonomous cities of Ceuta and Melilla. You can read more details about obtaining this data in the methodology.

Globally, confirmed cases of COVID-19 already only continue to decline 📉 in 219 municipalities where 7% of the Spanish population lives. On the other hand, they are rising 📈 in 1,157 localities where 74% of the population lives and are in the plateau phase (they remain more or less the same as two weeks ago) in 75, where 3% live. The rest are very small municipalities where very few cases are registered – less than 5 every two weeks – or for which there is no information available – representing 15% of the Spanish population.

The map that opens this information shows the data of total confirmed COVID-19 cases, in 14 days and the trend of infections in each municipality of the autonomous communities that have published their contagion data in each locality: practically the entire territory to With the exception of the smaller municipalities of Castilla y León, Catalunya and Galicia, which do not break down the figures for the municipalities with fewer inhabitants.