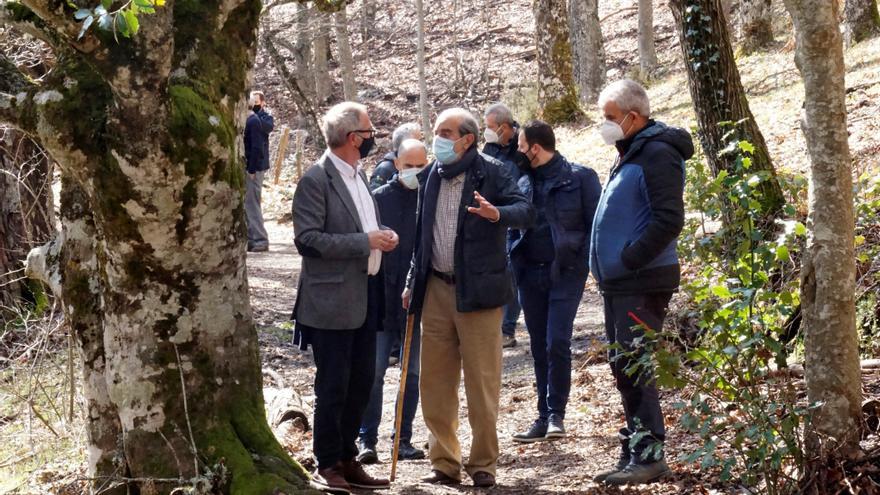 Montejo (Madrid), Mar 14 (EFE) .- The Hayedo de Montejo, to the northeast of the Community of Madrid, is one of the most unique and best-preserved forests in the world, but the key to its survival lies in its expansion, in the Researchers from the Polytechnic University of Madrid are already working with the support of the Montemadrid Foundation.

One of the greatest weaknesses of the centenary beech forest located further south in Europe is its small size: barely 125 hectares that mark a section of Alto Jarama, in the Madrid municipality of Montejo, within the Sierra del Rincón Biosphere Reserve, on the border with Guadalajara.

“Here comes a summer storm in a dry year, lightning strikes and El Hayedo burns before we know it,” explains Luis Gil, professor at the School of Forestry at the Polytechnic University of Madrid (UPM).

Through an agreement signed with the Community of Madrid in 1992, and with the support of the Montemadrid Foundation, researchers from the UPM School of Forestry have turned El Hayedo into a living laboratory where they can decipher its genetics, ecophysiology, dispersion or climate adaptation; In other words, what species does it have, how does it regenerate, and where is this centenary forest going?

Almost three decades of study and monitoring have helped to understand fundamental dynamics and processes in the forest, and curiosities such as the work of a species of mouse that scatters the seeds from which new specimens sprout underground, or that El Hayedo is home to more than 13% of the unique trees in the entire Community of Madrid, 60% of the butterfly species in the region and 40% in Spain.

The meteorological station located 23 meters away, in the UPM scientific observation tower, made it possible to certify the climatic variations that have occurred in the last 30 years, and to verify, among others, how rainfall in El Hayedo has been reduced by 20% in the last 15 years (compared to the first 15 of measurement) and the average temperature has gone from 9.5 to 9.8 degrees.

“That a forest in which about 1,000 liters of rainwater falls a year remains at 800 liters is a significant fact, especially in the case of the beech tree, which is at its southern limit,” explains Guillermo González, researcher at the School of Montes.

Along these lines, the UPM scientists who know this forest best consider that its greatest challenge is to expand to increase its ability to survive in the face of fire, plague, or climatic impacts.

They plan to extend it uphill towards the La Solana repopulation pine forest, on the left side of the river where it is located, and on the other, extending the riverside forest for several kilometers, in the direction of the source of the Jarama river.

In the case of the uphill expansion, scientists have seen that although pine forests, such as La Solana, are ideal habitats for hardwoods, the natural entry of new specimens of beech, oak or holly is very slow due to the scant dispersal of fruits from El Hayedo and the excessively shady environment.

That is why they propose creating “clearings” in the pine forest –reducing the number of pines so that there is more light, water and nutrients-, and creating several seed dispersal nuclei, which facilitate the advancement processes of beech, Spanish oak and sessile. , and holly, the most common species. “It would be clearings controlled in size, predator control and species density, which if working well, would not only extend El Hayedo but would improve the vigor of the remaining pines,” Gil details.

In the lower part, the objective is to expand the forest towards the source of the Jarama -deteriorated by the use for firewood that the town of Montejo made until the 60s-, repopulating with riverside species such as birch, alder or ash trees that acclimatize well to the areas closest to the river.

José Guirao, president of the Montemadrid Foundation –which supports this research project within the framework of its continued collaboration with the Sierra del Rincón Biosphere Reserve- has participated this week in the beginning of the preparatory work for the expansion of El Hayedo and in the planting of riverside specimens, which is being done “in limited areas to protect them and so that they can grow without interaction,” he tells EFE.

“The idea is to continue supporting the recovery, maintenance, and regeneration of this forest, which is exceptional, and needs care and help to expand and ensure that this natural wonder endures over time,” he details.

The Hayedo de Montejo is considered one of the most unique forests in Europe: it has more than 120,000 trees, almost a thousand of them beech and centenary oaks and really special, such as the La Roca beech that seems to have fused its roots with the stone that formed it. sustains, or that of the Elephant’s Leg, due to the unique shape of its trunk.