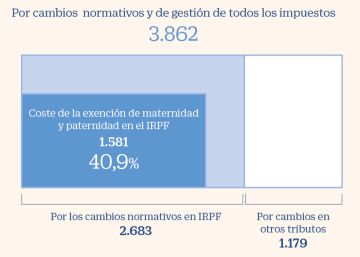 The exemption from the payment of personal income tax in maternity and paternity benefits already throws an invoice of 1,675 million euros for public coffers, between the amount returned corresponding to the last years, the amount that has ceased to be collected for the year 2018 and the loss of the withholdings of this year, according to the latest data managed by the Tax Agency. The amount represents 70% of all the deviation of public revenues in 2019 due to regulatory changes that affect the income tax and 41% of the total impact generated by the regulatory modifications of the set of taxes.

The origin of this invoice is in the Supreme Court ruling last October he decreed that “the public benefits for maternity received from Social Security are exempt from the Income Tax for Individuals”. The ruling meant that the tax should cease to be applied to these public aids and opened the door for its beneficiaries to recover the overpayment in the last four years.

In response, the Government of Pedro Sánchez launched a return mechanism to avoid a potential judicial collapse and expedite by administrative channel the foreseeable flood of claims on non-prescribed income declarations, that is, from those corresponding to the 2014 financial year in ahead.

In addition, in order to avoid new litigation to clarify each case, the Minister of Finance, María Jesús Montero, announced that the IRPF charged for the benefits of paternity, as well as that applied to mutual dependent officials instead of Social Security. Finally, last June Montero agreed to compensate too to those affected who already have a firm ruling against them prior to the Supreme Court ruling, again until 2014.

As a result, the Tax Agency has already returned 1,127 million euros initially charged to the holders of maternity and paternity benefits between 2014 and 2017, according to the latest available data, corresponding to the end of July. Of these, 94 were paid in December and 1,033 million so far this year.

In turn, the Treasury has taken advantage of the last year's income campaign, which ended this last month of June, to pay the beneficiaries of the benefits the amount that had been withheld in the first 10 months of 2018 (until the judgment of the Supreme). The Treasury has just calculated this impact for the first time, which amounts to 478 million.

Finally, the Tax Agency has stopped withholding about 70 million on maternity and paternity benefits granted in the first seven months of the current year.

The amount that the treasury imputes to the year 2019, once subtracted therefore the return charged to last December, stands at 1,581 million. This amount is primarily responsible for the diversion of tax revenues due to regulatory and management changes that have been recorded this year. Specifically, it represents six out of every 10 euros of the 2,683 million in which the collection of personal income tax has been reduced so far in 2019 due to regulatory changes and four out of 10 of the 3,862 million fall in revenues due to legal changes of the whole of taxes. The figure far exceeds the second item of the record, the 1.059 million impact of extraordinary corporate tax returns.

Beyond the effect on the collection, the funds destined to compensate the undue collection of personal income tax on maternity and paternity benefits in recent years aggravate the hole in public accounts. Specifically, its impact would be around one tenth of GDP in the state deficit. The Government aims to reduce this from 2.48% at the end of 2018 to 2% at the end of the year.

However, the Executive has distributed the fiscal impact of returning the maternity income tax between the years 2018 and 2019. Specifically, he charged 622 million to the 2018 deficit and would only charge the rest to 2019, according to the latest analysis of the Independent Authority of Fiscal Responsibility (Airef), which quantified this second item at 741 million. Although, in the light of the updated data, the calculation of the tax authority could fall short, the figures should be put into context. Thus, even if assumed in a single year, the invoice for the maternity and paternity exemption deficit is lower, for example, than the 1,793 million that EPAs (Asset Protection Schemes) are expected to cost this year. ), a kind of insurance against losses, that the State will pay to the banks that absorbed entities with problems in the crisis.

Compensation The return of personal income tax applied to maternity and paternity benefits for the years 2014 to 2017 will end up benefiting about 800,000 taxpayers, of which 734,000 had already received the approval of the Treasury in June, when the last official data was offered. The average return is around 1,300 euros at a rate of 2,012 euros for mothers and 470 euros for parents, who were enjoying lower duration. In addition, the Treasury plans to pay another 11 million to some 8,200 taxpayers who had judgments against the Supreme Court.

The missions of science and innovation | Opinion