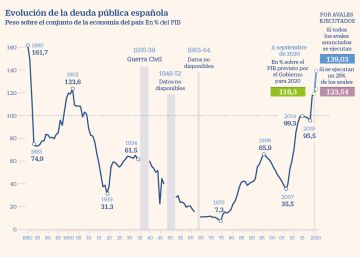 The high bill that the Spanish treasury is supplying to respond to the coronavirus pandemic, together with the significant volume of state endorsements Committed to maintaining the flow of private financing to companies in the midst of the unleashed crisis, they threaten to turn Spanish public debt into a time bomb. Only in the last days, the International Monetary Fund (IMF), the European Comission o the Independent Authority for Fiscal Responsibility (Airef) have already warned of the risk that debt implies that this year will jump to around 120% of GDP. And this without counting on the public guarantees deployed, which if executed en bloc would shoot the Spanish public debt to around 140% of GDP.

It should be borne in mind that Spain has been unable to cover its public spending with the income it generates annually since the outbreak of the 2008 crisis, incurring a deficit that has been paid for with a huge issue of public debt. Despite the fact that the size of this fiscal hole had been shrinking from the peaks reached in 2012, and after the slight rise to 2.8% of GDP in 2019, public debt closed last year at 95.5% of GDP.

From there, the accounting mismatch has ended up blowing up with the arrival of Covid-19. The measures promoted to shore up the health system, pay for the Temporary Employment Regulation Records (ERTE), aid to the self-employed, companies or disadvantaged groups, and the collapse of the collection, threaten to shoot the deficit above 11% this year and they have been increasing the debt month by month.

At the end of September, according to data published by the Bank of Spain this same week, public debt had grown by 120,000 million euros, marking a new all-time high of 1,308,439 million. The figure is equivalent to 114.1% of the nominal GDP of the last four quarters, but already amounts to 118.3% of the Gross Domestic Product communicated by the Executive to Brussels in the budget plan for the 2020 financial year. In the absence of a quarter, therefore, it is close to the initial forecast of 118.8% for the year as a whole and is on track to meet the projections of organizations such as the IMF, which expects it to reach 123%. In either case, it is the highest level in more than 100 years.

So far the evolution of the debt measured according to the European standards of the excessive deficit protocol. The State accumulates, however, a significant amount of contingent liabilities that at the moment have no cost, but that could end up having to be paid with additional issues. Specifically, according to information from the financial supervisor, the State accumulated guarantees worth almost 90,000 million euros before the outbreak of the pandemic.

As a result of this, however, the Government launched an unprecedented stimulus plan that included a first package of guarantees from the Official Credit Institute (ICO) for a value of 100,000 million, intended to encourage bank financing covering up to 80 % risk of defaults, and later deployed another line of 40,000 million, linked to investment projects and which now opens to hedging promissory notes from the alternative fixed income market (MARF).

At the moment, according to data from the Bank of Spain at the end of September, the State maintains public guarantees for 168,332 million, of which 78,935 million correspond to the program designed to alleviate the Covid crisis. However, some 20,000 million guarantees for the first plan and practically 40,000 million for the second have yet to be granted, which, if exhausted, would eventually raise the current guarantees to 229,000 million.

Such a volume of unaccounted liabilities would raise the total debt of the State to around 1.53 trillion. The equivalent of 139% of GDP estimated by the Government for 2020.

The guarantees, however, do not count as real cost until they are executed. In the case of ICO lines, this will occur when the companies that have been financed with credits guaranteed by the State are unable to meet their payments and the banks demand the activation of the guarantees in compensation. Only if 25% of the promised guarantees were executed, the debt would skyrocket by five points of GDP, to 123.5%.

Given the wear and tear of the productive fabric that is causing the Covid-19 crises, and given the economic slowdown that the second wave of infections and restrictions has imposed, the Government has decided to act to try to mitigate the risk that guarantees contribute to firing public debt. Thus, the Council of Ministers approved last Tuesday a relaxation of the financing guaranteed by the ICO, which raises the grace period in the payment of the principal of the loans from 12 to 24 months and the maximum term for the loan from five to eight years. return of credits. The objective, admitted the Third Vice President and Minister of Economic Affairs, Nadia Calviño, is “to reduce the probability of defaults”, which would require activating these guarantees.

Airef itself warned yesterday that “one of the main risks of the current situation is that the health crisis will cause structural damage, so that in the future it will be necessary to face not only a higher public debt ratio, but also a greater and more persistent structural deficit and a materialization of contingent liabilities of loans guaranteed by the State ”. The tax authority calculates that only the execution of between 15% and 30% of the first tranche of 100,000 million in public guarantees associated with Covid during the next five years “would mean an additional increase in the debt ratio of between one and two points of GDP ”, despite the fact that its size would already be greater than the current one due to the economic recovery.

The body chaired by Cristina Herrero warns, in any case, that even without this risk, the situation is already worrying and that, if significant measures are not taken to remedy it, “the debt-to-GDP ratio can stabilize around 120 % in the coming years ”even counting on Spain to grow again above its potential for 2025.

Types. Airef assumes that public debt will end this year at 118% of GDP, will drop to 116% in 2021 due to the recovery in the size of the economy, and will then end up stagnating at 120%. From there, it warns of a series of risks that could aggravate the situation, beyond the execution of public guarantees. One is “the greater dependence on favorable financing conditions”, since a rise in interest rates that weigh on such a volume of debt could complicate its management. A rise of 100 basis points in 2021 would raise debt by six points of GDP by 2030, he illustrates, when the cost of maintaining it would already be 2.8% of GDP.

Pensions Another threat is the aging of the population, which will raise the debt associated with the payment of pensions by nine points in a decade, and from 22 to 30 points by 2040.