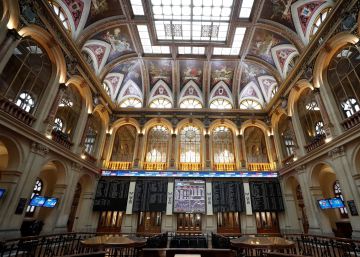 The Spanish Stock Exchange has pessimistically received the agreement reached between the PSOE and United We can to form a coalition Government after the elections this Sunday. If on Monday he practically ignored the election result, with an invaluable fall of 0.06% (9,388.5 points), this Tuesday he welcomed the embrace between Pedro Sánchez and Pablo Iglesias. The Ibex, which during the morning has traded with slight gains, has turned around and leaves around 0.8%, just one hour after closing.

Bankia and CaixaBank are the lowest values, up to 5% in the case of the Madrid entity and over 3% in Catalonia. The rest of the banks also fall. The banking sector is the most punished in the day, although in the morning it moved positively. Sergio Ávila, analyst of the IG broker, recalls that in the Podemos program there is "a direct tax on banking, while the PSOE wants to raise the corporate tax", as with other companies, in addition to having a tax on the project Financial transactions

Only a handful of companies hold green, including the parent company of Iberia, IAG, or Colonial real estate.

However, it is still too early to know if the pact reached between PSOE and Podemos goes somewhere, because in order to move forward with an investiture the favorable vote of a few political groups and the abstention of some more are necessary.

At the moment, the risk premium moves to the edge of the 70 points, its highest level in a month.