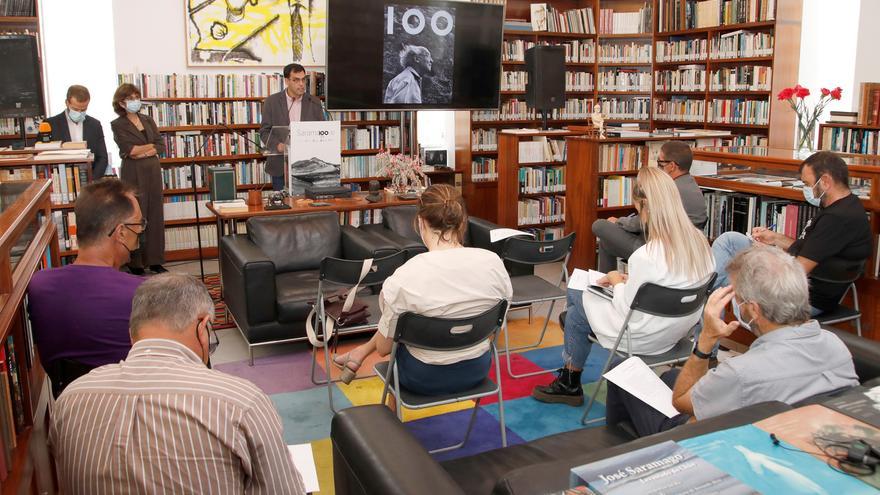 The events to commemorate the centenary of the birth of the 1998 Nobel Prize in Literature Jose Saramago (Azinhaga, November 16, 1922-Tías, Lanzarote, June 18, 2010) They will start on November 16 with readings in the educational centers of Portugal, peninsular Spain and the Canary Islands of the story of the writer the biggest flower in the world. The play tells the story of a boy who, on his journey through the world, finds a withered flower, which leads him to look for water by moving away from his house and crossing unknown landscapes looking for a way to save the flower.

It is one of the calls of the centenary program, of which a preview was presented today at A Casa (Tías) by the José Saramago Foundation, the Lanzarote Cabildo, the Canary Islands Government and the Tías City Council.

Also in the field of literature, on December 4, at the Teatro de Tías there will be a poetic recital by José Luis Gómez and already in 2022, books by Saramago himself will be presented as well as other authors, such as Irene Vallejo or Lidia Jorge .

The 2022 Book Fair or the Festival of the Tale Counted Words on the Flight will have a special section dedicated to the author of Essay on Blindness.

Saramago’s widow and president of the foundation that bears her name, Pilar del Río, also announced a new book by Fernando Gómez Aguilera dedicated to the work that the Portuguese Nobel Prize winner wrote in Lanzarote.

As for the theater, many and varied will be the proposals that can be enjoyed in Lanzarote and in other islands of the Archipelago. Between March 7 and 11, 2022, the The journey of the elephant, by Trigo Limpio Teatro ACERT. Corps Theater will represent Blindness and Joaquín Vida will direct the staging of The night.

As for music and dance, the concert stands out The seven last words of Christ on the Cross, by Joseph Haydn, directed by Jordi Savall at Jameos del Agua (on February 10, within the FIMC programming). Esperanza Fernández will present a flamenco and poetry show and Luis Pastor will bring Lanzarote In this corner of time. Teresa Salgueiro, the former Madredeus singer, will perform at the institutional act that will take place on November 16, 2022.

The María Pagés dance company will perform in Lanzarote, Gran Canaria and Tenerife, while Danca em Dialogues they will make a version of Convent memorial. In addition to all this, it is planned to represent the opera “Saramago y Lanzarote”.

As to exhibitions, highlight the sample Stone Raft Writers, one of Saramago book covers by Manuel Estrada, or itinerant educational exhibitions by the schools of Lanzarote.

“Lanzarote, a central place for literary creation and culture”

Del Río explained that in the design of the programming, the collaboration between the foundation and the three Canarian public administrations has been “fluid, friendly and immediate.” He stressed that, “in these times, culture is necessary because reason and conscience are enlarged with culture. Culture helps us to know ourselves better and helps us to be better human beings. As José himself said, we must stop being statistical data and become more human beings, with reason, conscience and heart “, he asserted.

“Saramago felt like one more canary, overwhelmed and grateful for the recognition he received on the islands”

The president of the José Saramago Foundation concluded by stating that “Saramago felt like one more canary, overwhelmed and grateful for the recognition he received on the islands. That is why this is an opportunity to impregnate the entire Archipelago with your spirit. Lanzarote can and must become a central place for literary creation and culture ”, Del Río concluded.

For his part, the Deputy Minister of Culture of the Government of the Canary Islands, Juan Marquez, affirmed that “more merit than being born in a place has to choose it to live. Therefore, the centennial celebration is a wonderful opportunity to vindicate the canariety of José Saramago”, Assured Márquez. In addition, he stressed that it is “an ideal occasion to reinforce the historical cultural ties that unite us with Portugal and Portuguese culture.”

In turn, Alberto Aguiar, Councilor for Culture of the Cabildo, affirmed that this is “an excellent opportunity to celebrate the various dimensions of the life and career of José Saramago, as well as to honor his figure as a citizen and further strengthen his presence in the cultural history of Lanzarote ”. Aguiar stressed that the programming has been developed “from deep respect for the memory of Saramago and in consensus with the Foundation that watches over his legacy.”

Alberto Aguiar – Councilor for Culture of the Cabildo de Lanzarote

Pepa Gonzalez, Councilor for Culture of the City Council of Tías stated, on behalf of the entire city council, “The satisfaction of the council for being part of the tributes to one of our most illustrious citizens. A man who stood out for his literary work, but above all for his critical thinking and his height as a human being ”.

“He stood out for his literary work, but above all for his critical thinking and his height as a human being”

Pepa González – Councilor for Culture of the Tías City Council

Carlos Reis spoke of the role that Lanzarote played in the life and work of Saramago.

The writer, novelist, poet, journalist and playwright José Saramago built a unique and universal work with a deep aesthetic and ethical dimension, so the centenary of his birth is an excellent opportunity to celebrate the various dimensions of his life and his career. as well as to honor his figure as a citizen and further strengthen his presence in the cultural and literary history of Lanzarote and the Canary Islands.