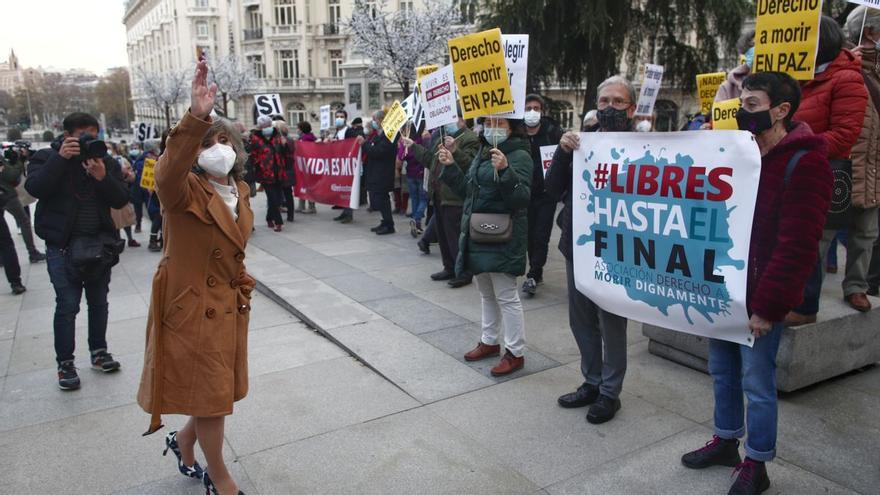 This time yes. The euthanasia law is now a reality after Congress has given the final green light to the text from the Senate. In mid-December the Lower House has already supported the rule by a large majority which introduces a new right in our country, but in its usual process the senators incorporated some amendments and therefore required this last ratification. The approval, which has resulted in 202 votes in favor, 141 against and two abstentions, makes Spain one of the first countries in the world to allow people to help die with dignity in the face of irreversible suffering after more than 20 years of failed attempts and of intense social and political debate. PP, Vox and UPN have voted against.

The text, promoted by the PSOE, incorporates into the legal system a new individual right, the right to euthanasia, which can be requested in a context of suffering “that the person experiences as unacceptable and that has not been mitigated by other means.” The autonomy and freedom of the patient is thus protected, the rule reasons, because “there is no constitutional duty to impose or protect life at all costs and against the will” of the person.

The vote in plenary, which took place after 12:30, culminated in a long standing ovation from most of the chamber, which broke into applause for more than four minutes. At the same time, the deputies of the far-right party, also standing, have displayed the message “we will repeal it” through their computers and tablets in reference to their announcement to appeal it to the Constitutional Court. The president of the chamber, Mertixtell Batet, has had to interrupt the scene remembering that “the use of banners is not allowed and that freedom of expression is exercised through the word”.

It was the Galician Ramón Sampedro who in the 90s gave a public voice to the fight for dignified death, but the faces of Luis de Marcos, Maribel tellaetxe, Antoni Monguilod or Maria Jose Carrasco, who asked until their last moments to be able to put an end to their life, are today more present than ever. Their relatives have not been able to see the voting live from the heights of the guest gallery, as is often the case in historical plenary sessions, due to restrictions due to the pandemic, but they have followed it from a room of Congress. Families that the deputies have wanted to name and honor in their turn to fix positions and with whom they have apologized “for being late.”

Most of the formations have been defending their arguments in support of the law and recalling that what it implies is “the achievement of a right, which is the achievement of a right and not an obligation”, in the words of Joseba Aguirretxea, of the PNV , who ended his speech with applause “there is nothing better than living when you want to live, but there is nothing worse than living when you want to die.” “Until now the laws condemned to live people who endured inhuman and irreversible suffering, but luckily this is going to change today. This law does not oblige anyone, the only thing it does is that they can choose,” he said in the same line Carolina Telechea, ERC deputy.

That it is a “guarantee” law is something that has also been reiterated on several occasions throughout the session, and also that “it is only intended to guarantee individual rights and the exercise of personal autonomy until the last moment of life. “Rosa María Medel proclaimed from United We Can. The socialist María Luisa Carcedo, rapporteur for the law, has recalled the names of some of the people who have asked to die publicly in recent years, people who “decided to tell their privacy” to “achieve this new right.” “They and many relatives, who no longer fight for their own because they left with sadness and pain, fight for others, and are the true architects of this new right.”

Carcedo also recalled the deceased doctor Luis Montes, who was the victim of a hoax on terminal sedation that was fueled by the government of the Community of Madrid, and has completed his intervention with a few words from Luis de Marcos, a multiple sclerosis patient who died in August 2017 after starting a public campaign for the decriminalization of euthanasia: “Thank you very much to all of you who in some way have supported this cause, which is not only mine, but that of any human being Hopefully you can have that outlet if you need it. ” The former Minister of Health has been dismissed from the rostrum with a long standing ovation and has given way to the current holder of the portfolio, Carolina Darias, who has expressed her gratitude to the deputies, families and associations in defense of euthanasia “in name of the Government “.

Vox will appeal to the Constitutional

Aguirretxea, of the PNV, has also used part of his intervention to address the other parties of the right, PP and Vox, who have voted against, to whom he has reminded that “we cannot legislate based on ethical and moral codes only of each one, that is what you propose “. Also Sara Giménez, from Ciudadanos, has wanted to mark distances in this matter, and they have been accused of “wanting to impose their morality on the Spanish” against what “we give freedom for the Spanish to decide in what conditions they want to live.” Giménez has reminded the popular of the long string of historical laws against which they have voted, such as divorce, abortion or equal marriage: “They do not want the freedom to decide, but all those rights are today by Spaniards in spite of you “.

The PP, Vox and UPN have also opposed the law in this final stretch of the procedure, as they have done in all previous votes, in which they have been immovable in their opposite positions. The far-right party has accused the rest of the formations of “consummating its plan to implement the culture of death” and has announced that it will appeal the rule to the Constitutional Court, which will request its paralysis in a precautionary manner. The popular José Ignacio Echániz has reiterated his speech full of hoaxes from previous sessions by ensuring that the norm “opens the door to unsolicited euthanasia” or that it “wants to force doctors to undermine respect for human life.”

How is the proccess

Euthanasia is expected to be legal in our country in about three months. At the expense of the exact day on which the Official State Gazette (BOE) publishes it after its approval – Friday 19 is a holiday in several communities – the text stipulates that term for its entry into force, with the exception of the article referring to the creation of the Communities’ Guarantee and Evaluation Commissions, which will be applied one day later. The objective is that there is time to implement them and there is no temporary mismatch. This was one of the slight changes introduced by the Senate, together with the inclusion of the nursing community in these bodies, which until then only included medical and legal personnel.

In practice, it is a legal framework that decriminalizes the fact of providing help to die in limited situations, either actively, which is when a doctor ends the life of the patient at his request, or in the form of ‘assisted suicide’, which refers to the person who kills himself with the assistance of a doctor, who provides the necessary means and attends to him in the process. You must be of legal age and suffer a “serious and incurable” disease or a “serious, chronic and incapacitating condition” that causes “intolerable physical and psychological suffering”, which must be certified by a doctor. In addition, it has to be “capable” of acting and deciding and doing it in an “autonomous, conscious and informed way.” Physicians shall have the right to conscientious objection.

The law provides that it will be a public benefit included in the portfolio of common services of the National Health System and that it may be carried out in public, private or subsidized health centers, and at home. At any time, the person who requests it can revoke their request and must have Spanish nationality, legal residence or have a registration certificate that proves at least 12 months of permanence in Spain.

It will also have to go through several filters in which at least two different doctors must authorize the request and a Guarantee and Evaluation Commission will do a prior control. All this with stipulated deadlines that can only be shortened if death is “imminent” and after a “deliberative procedure” between the health care provider and the patient on their diagnosis, therapeutic possibilities and expected results, as well as on possible palliative care. Information that the law requires the applicant to receive in writing.