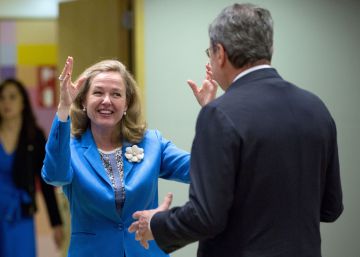 Europe wants to maintain at all costs the share of power that for almost three quarters of a century has given it the direction of International Monetary Fund (IMF). The EU finance ministers met on Monday with urgency to outline a consensus candidate for the position, which will be vacant after the departure of Christine Lagarde to the ECB. Community sources argued that there is a "strong" willingness to put a name on the table as soon as possible. The objective is to maintain the share of power in that key institution, which has always had a European leader at the helm and who can now covet other blocks, such as emerging ones.

Little did the ministers have to say at the Eurogroup meeting about the Lagarde nomination, whose election was taken last week by the heads of state and government of the EU and will be confirmed on Tuesday by its finance holders in the Council. However, the beginning of the succession career in the IMF has already activated the conversations between the community partners so that it remains a European who assumes his leadership.

Since its founding, the IMF has had 11 managing directors, all of them European. An unwritten rule reserves that charge for Europe, while the United States maintains control of the world Bank. But that norm is not enshrined in any treaty and other emerging economies bid for that chair. And among the names that are shuffled to succeed Lagarde is, for example, the academic and former governor of the Central Bank of India Raghuram Rajan.

Although not on the agenda, the president of the Eurogroup, Mário Centeno, decided to include that issue in the agenda. Centeno justified it in that "given the geopolitical tensions" the EU must stand firm in support of "multilateralism". The Spanish Economy Minister, Nadia Calviño, argued clearly for the EU to maintain that position. "Give the Spanish point of view, and I think that from the point of view of all the Member States, the priority is for the managing director of the IMF to remain a European," he said.

Diplomatic sources assured that informal contacts are already taking place among several countries in order to present a candidate when the Fund's executive committee opens the process. "You have to make a decision quickly," said Bruno Le Maire, French finance minister.

Le Maire argued that ministers should explore and evaluate all possible names so that then the heads of state and government take a position on the matter. In addition, France urges that there be only one candidate, agreed between the Twenty-eight, so that there is no "rivalry" between countries when it comes to the selection process.

None of the ministers wanted to delve into the names on the table. Among them, is that of Bank of England Governor Mark Carney. Although he was born and raised in Canada – where he even took the reins of the Central Bank – Carney also has Irish and British passports. Also the former Minister of Finance of the Netherlands and former head of the Eurogroup, Jeroen Dijsselbloem, is among the favorites to become the card that Europe plays. Dutch Minister Wopke Hoekstra declined to comment on that possibility.

His Italian counterpart, Giovanni Tria, was presented with another more complex option that would involve an exchange of positions: Lagarde would go to the ECB and the current president of that institution, Mario Draghi, to the IMF. That operation would, however, require changing the agency's norm, which sets the age limit for access to the position in 65 years (Draghi has 71). Tria limited herself to commenting that before it would be necessary to know the availability of the Italian banker.

As already happened during the election of the EU leadership, two other names appear recurrently in the pools: the current Commissioner of Competition, Margrethe Vestager, and the World Bank's CEO, Kristalina Georgieva.

Asked if she looked like a candidate for that position, the minister Nadia Calviño It was not ruled out, but he considered "premature" to speak of names. "We have not started the informal discussions, which seems premature to reflect on these issues. I think the priority is clear and we will see how the discussions develop, "he said.

Diplomatic sources explained that the talks, which also include the head of the Eurogroup, will continue in the Council of Finance Ministers of the EU on Tuesday and then informally. These sources did not rule out holding an extraordinary meeting, if necessary, to get a name for the organization.

The executive committee of the IMF, which is made up of 24 countries or groups of member states, is responsible for opening the deadline for the selection process and choosing three finalists, who will be interviewed in person. The vote of the members is weighted by their weight in the institution. The United States is the country with the highest percentage of votes (16.52%) and Germany, the State of the EU with the most weight.

Italy was freed for the second time in just six months that Brussels decided to protect its finances by its excess debt, 132.2% of the Gross Domestic Product (GDP), after the government promised to make additional adjustments of 7,600 million euros to close the year with a deficit of 2.04% of GDP.

The Commissioner of Economic Affairs, Pierre Moscovici, had to explain to the partners of the euro the reasons why he decided not to open an infringement file to Rome. "Nobody is interested in a file, neither to Italy, nor to the euro zone," he said. Moscovici said after the meeting that the Commission obtained the support of all the ministers on the decision that it finally adopted.

The Italian Finance Minister, Giovanni Tria, explained that the country will continue to respect the rules, also in 2020, when the Commission expects that its deficit will exceed the 3% established by the EU regulations. "We will decide in October the new budget, of course in accordance with the general European fiscal rules," he said.