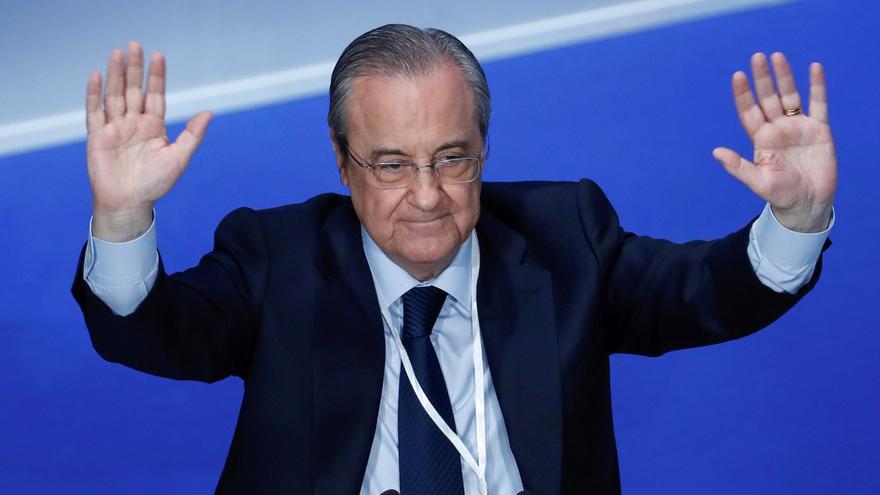 The Controversial European Football Super League just announced by twelve great European clubs, with Florentino Pérez at the helm, it will be managed by a Spanish company that will rub shoulders with other companies in the Ibex 35 and that threatens the traditional distribution of the millionaire television income generated by this sport.

The British newspaper ‘Financial Times’ reveals this Monday that the 15 permanent members that this competition will have, if it finally goes ahead, will be the owners of the new company, which will be chaired by Florentino Pérez, head of Real Madrid.

According to their data, each of the founding teams you will receive between 200 and 300 million euros as a “welcome bonus”, while JPMorgan has confirmed to Efe that it will finance the new European Super League with 3,250 million, whose general secretary will be Anas Laghrari, partner of the Spanish firm Key Capital.

They are six English clubs (Arsenal, Chelsea, Liverpool, Manchester City, Manchester United and Tottenham Hotspur), three Italians (Juventus, Inter Milan, and AC Milan) and three Spanish (FC Barcelona, ​​Real Madrid and Atlético de Madrid) , as detailed by the Super League in a statement. To them three more clubs are expected to join before August, which would be when it would start; as well as with another five that will be classified annually based on their sporting achievements.

The JPMorgan loan will be repaid in 23 years and will be insured starting at future television rights of the competition. In addition, the clubs that make up the controversial project have agreed to pay 264 million a year to cover the debt, a figure that includes interest of between 2 and 3%, according to the aforementioned British newspaper.

The organizers of the new competition have begun to negotiate future television rights and they hope to achieve agreements with firms such as Amazon, Facebook, Disney and Sky, with which they aspire to raise about 4,000 million a year, sources close to the Superliga assure that newspaper.

This new competition could devalue the television rights of the Champions League and increase the costs of operators and chains, which would be forced to bid for it as well.

According to a report by Barclays, the key question is whether the contracts signed by television networks and operators to broadcast the Champions League allow them return the rights to UEFA “if the competition loses twelve of its best clubs.” Otherwise, they should “pay a significant amount for the Champions League and also bid for the Super League.

The television rights of the Champions League are distributed differently depending on the country. In Spain, belong to Telefónica until 2024While in the United Kingdom they are in the hands of BT Sport and in Italy, by Sky, Mediaset and Amazon.

The report also raises the possibility that the driving clubs of the European Super League are expelled from national competitions. In this case, the free-to-air channels -Atresmedia or Mediaset España- could benefit from an eventual loss of televised football audience, although the benefit would be “marginal”.

“If the main English, Spanish and Italian clubs that have joined the Superliga cannot play in national competitions and the Superliga does not start until August, there could be audience gains in the short term for those networks,” as the national leagues they are generally relayed through payment platforms, the report explains.

Strong rises in the Stock Market

The announcement at dawn from Sunday to Monday of this initiative has led to strong stock market rises among clubs publicly traded, although JPMorgan’s listing was down slightly in New York.

Thus, Manchester United shares advanced more than 10% towards the mid-session on Wall Street, while those of Juventus – whose president, Andrea Agnelli, will be the new vice president of the Super League – advanced 17.85% on the stock market from Milan.

Even Borussia Dortmund, which has not announced its participation in the Super League, rose by 11.22% in the German market, given the possibility that it will finally join a project that, however, has been quickly rejected from other sports fields and even governmental.

By cons, Olympique Lyonnais, the only French league team listed on the stock exchange, fell more than 2 percent after the presentation of the project, to which no French or German team has joined, although, according to various media, Paris Saint-Germain has a guaranteed place in the new competition, as well as another French club, a position to which Olympique opts Marseille and Lyon.