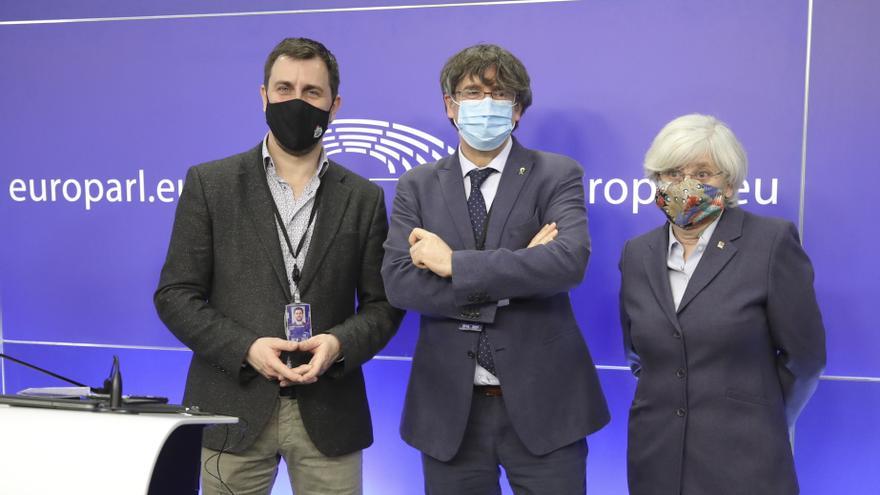 The European Parliament has lifted the immunity of Carles Puigdemont (400 votes in favor, 248 against and 45 abstentions), Toni Comín (404 in favor; 247 against; 42 abstentions) and Clara Ponsatí (404 in favor; 247 against and 42 abstentions), the three independence leaders and MEPs claimed by the Supreme Court for the 1-O referendum. The vote, held on Monday afternoon but known first thing this Tuesday due to the semi-presence of the European Parliament, comes two weeks after the report passed through the Legal Affairs Committee – 15 votes in favor, 8 against and two abstentions -, and in full negotiations in Catalonia after the 14F elections.

The result in the plenary session has represented around 57% of yeses of the 705 MEPs with the right to vote, somewhat below the 60% of yeses achieved in the Committee on Legal Affairs.

The report approved and written by the rapporteur for the cases, the ultra-conservative Bulgarian Angel Dzhambazki (ECR, the Vox group), defends the lifting of the immunity of the three MEPs. Popular, liberal, ultra-conservative and socialists have asserted their majority to approve it. Against, Green (ERC, Catalunya en Comú) and La Izquierda (Podemos, IU, EH Bildu) have voted. The PNV (Renew) has also voted against.

After the approval in plenary session of the lifting of immunity – not the abolition of the status of MEPs – the case of the Euro order is reactivated before the Belgian Justice, paralyzed after the entry into the European Parliament of the independence leaders. From there, the case would go back to the hands of the Belgian judge Jan Coopens, who in the first instance already ruled in favor of the former minister Lluís Puig. Ruling ratified in second instance by the Belgian justice, considering that the Supreme Court is not the competent court for the case.

The judgment of the Belgian Appeals Chamber concluded: “Given that Lluís Puig i Gordi was not a member of any parliament [estatal] and in principle it should be tried by a Catalan court and, on the other hand, given that the Spanish Supreme Court [estatal] has repeatedly declared competent to try all the co-defendants on the basis of the close connection between the crimes charged to each of them without there being an explicit legal basis to extend this jurisdiction, it is found that there are well-founded reasons to believe that the execution of the European arrest warrant would harm the fundamental rights of the person concerned. ”

Of course, while the European arrest warrant is active, nothing guarantees the three that in another country, such as France -except for the case of going to the plenary sessions in Strasbourg-, the judge on duty would not decide in the opposite direction and proceed to extradite them. In other words, the lifting of immunity and the reactivation of the euro order may affect the freedom of movement of the three MEPs.

Sources from the Puigdemont, Comín and Ponsatí team question whether a single speaker has been appointed for the three MEPs because the regulation states that there must be one “for each immunity file”, as well as the political and legal implications that a deputy entails that he shares a group with Vox –but also with the Flemish nationalists of the N-VA, political allies of the independentistas in Belgium–. The speaker also participated in the first visit of Vox leaders to the European Parliament, the day the secretary general of the far-right party, Javier Ortega Smith, shouted: “Puigdemont, to prison.”

The argument used by the three MEPs in the appeal process is that they are victims of political persecution. Thus, the basis of the defense of the legal team of Puigdemont, Comín and Ponsatí has ​​been to argue that they want to prevent them from serving as MEPs as a result. They have also put on the table that the Supreme Court “is not a competent body” in all this – as the Belgian Justice ruled -, and that the three MEPs cannot be accused of acts that do not exist in other European countries or they are not a crime, and they remember that there are precedents on this point.