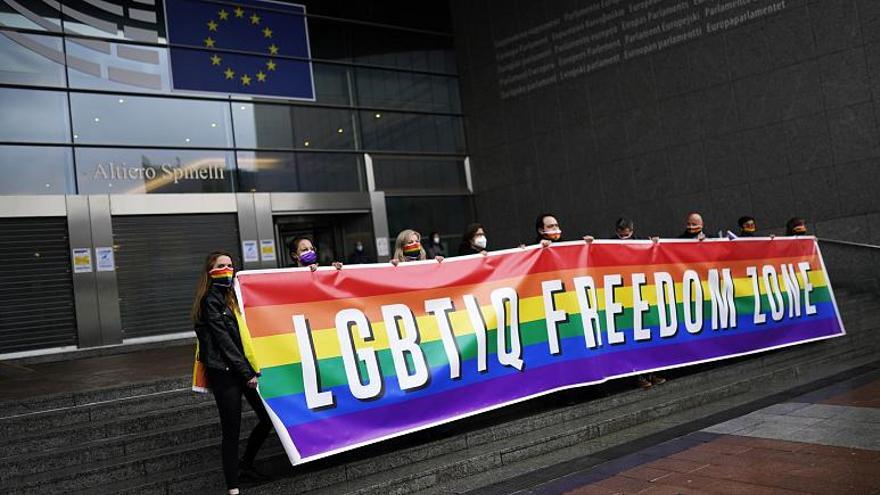 The European Parliament has declared the EU a zone of freedom for LGTBIQ people. In a declaration approved by all groups except those on the extreme right (492 yeses; 141 noes; and 46 abstentions), the European Parliament thus responds to the persecution of these groups in some European countries, particularly in Poland, where there are municipalities that they have declared themselves “free of LGTBI”.

The president of the European Socialists, Iratxe García, stated in the plenary debate: “Fear, violence and discrimination continue to be what some people face in some countries. There are 70 countries that criminalize same-sex unions. , and 12 of them can apply the death penalty. Polish LGTBI-free zones recall the barbarism of our past. Protection corresponds to all institutions. The LGTBIQ equality strategy is a firm response by the European Commission to the decline of freedoms in Poland and Hungary. We will not accept homophobic harassment in Poland and Hungary. ”

“What threatens human rights is hatred and intolerance,” García said: “No one should hide from anything or anyone. We are free to be who we are and to love whoever we want to love. Let no one be persecuted in no corner of the EU. Let us unite against hatred, for the right of all to live free and equal in dignity and rights. ”

María Eugenia Rodríguez Palop, head of the Podemos delegation, has applauded that the Commission expands the list of hate crimes to LGTBIQs and has asked that the right-wing be ostracized for encouraging homophobia from the institutions. declares a zone of freedom for LGTBIQ people, homophobia will make it much more difficult “.

Roberta Metsola, Vice President of the popular Europeans in the European Parliament, has affirmed: “Each one can be what they want to be and wherever they want to be, for those who are suffering, who do not have to bend to injustice and those who abuse, they will not find sanctuary. We are pending, European is the freedom to live the life that one wants to live, to love whoever wants to love, and to know what one wants to be, neither a state nor a city where that freedom is not defended “.

The German green MEP, Terry, has defended: “They call us crazy, perverts, an irrelevant minority, but we only ask for equality and cite books written thousands of years ago. They deprive us of our rights, they turn us into scapegoats, when we only want security. , they deny us being what we want. We only ask for freedom. We are not going to surrender, we are going to continue fighting. This declaration will be only a first step. Our lives are in danger, they are brutalized in too many places in the EU. We are many, we are everywhere parts and we are strong. ”

The Dutch liberal Sophie in ‘t Veld, defended in the European Parliament to send “a message to the whole world: Europe is an area of ​​LGBTIQ freedom, because Europe is the home of all of us, without exceptions, and at home we have the right to be safe and free “.

During the debate, members of the far-right groups Identity and Democracy (Le Pen, Salvini) and the ultraconservatives of ECR ​​(Vox, Fratelli d’Italia, Polish PiS) refused to declare the European Union a freedom zone for LGTBIQ people. The Polish MEP Ryszard Antoni Legutko, from the ruler PiS, called the proposal “ridiculous” and pointed out that the European Parliament “has degenerated into an ideological machine. All these actions launched against our region are an illegal act of the Commission, it is intimidation and this debate is ideological madness with no respect for people.

The Estonian MEP of ID Jaak Madison rejected that in any EU state sexual orientation is criminalized. In its alternative text proposal, ID expresses its “condemnation of the prejudice to women who play certain sports while transgender people are allowed to compete.”