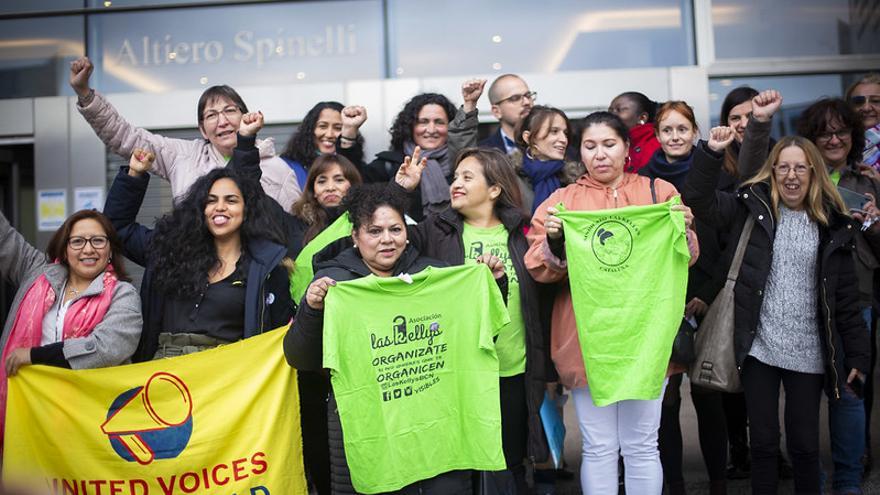 There is more and more female poverty. Inequalities affect women to a greater extent. Crises, like the current one, hit women more than men. Why? "For structural causes linked to gender inequalities", explains the socialist MEP Lina Gálvez, author of the report on Poverty of women in Europe of the Committee on Women's Rights and Gender Equality of the European Parliament.

Moreover, according to the document, the precariousness of the data makes up a situation that could be even worse: "The poverty of women is higher than that of men and has grown in absolute terms and in relation to men. The statistics are The risk of poverty or social exclusion (AROPE) in the EU in 2020 was higher for women than for men (22.9% compared to 20.9%); the gender gap in terms of poverty has increased in 21 Member States since 2017 and the relative risk of poverty (AROP) presents a significant gender gap; in 2019 the percentage difference was 1.3 and in 2020 it was 2.5 ".

The report, which was presented in December in committee, is in the process of amendments and will be voted on in plenary in Strasbourg in February or March. It concludes with a call to "change economic governance" to tackle women's poverty.

The European Parliament has already carried out preliminary work on the matter. Gálvez explains that the current report confirms that "the data show greater female poverty, a greater risk of poverty and social exclusion, digital poverty in access to digital resources and energy poverty, which has increased in most member states. It is something that has structural causes linked to gender inequalities. " In addition, these inequalities "would be greater if measured better" and "are not combated simply with measures of a certain subsidy through certain specific policies", but "by changing economic policies and governance".

According to Gálvez, "the problem is that family income is measured, and not individual income." "What we know from gender studies is that enjoying common income is not the same as the autonomy or power that your own income gives you."

Although measuring poverty only in terms of family income is not "entirely" accurate, taking into account only individual ones "would also be a problem, because by belonging to a family you have access to common income." "If it were measured better, it would surely result in greater gender inequalities in relation to poverty," she concludes.

The PSOE MEP also highlights in her report the problem of "time poverty", people with hardly any income, "but who have to spend a lot of time" to get it, "so they don't have time for anything else, not even for to live or to care. A loop is generated in people who do not have any autonomy or any time to be included in social life. " This translates into "great social exclusion, because in the end it leaves you without time and without income even to buy that time."

The document reflects the gender gap in time poverty studies, but also in single-mother households. "I try to include the link with child poverty, and the link that child poverty has with the intergenerational perpetuation of poverty: the social elevator works less and less and the family in which you are born increasingly conditions your opportunities in adulthood. Equal opportunities or inequality of opportunities are the fathers and especially the mothers in these single-mother households ".

Gálvez also includes the problem of sexist violence: "Most homeless women were previously victims of violence because they have less chance of escaping" from it. "When you are in a family with little income, you have much fewer resources to escape from that situation. Resources of all kinds, from the possibility of hiring a lawyer, to having an economic autonomy that allows you to settle in another house with your children."

"European policies in recent decades have not really been about equality", laments the Socialist MEP: "Now things are changing, but they have been employability policies. If what you are looking for is simply the incorporation of women into the labor market I work without attacking underlying inequalities, in the end that incorporation will always be precarious, unequal, segregated, since inequality continues to be maintained in the family. You will not have the same opportunities and that constant feedback is generated. "

"Even if they are in confinement," explains Gálvez, "it is mainly women who have borne the burden of care, even when men were also confined in the domestic sphere. It has been seen, for example, in scientific publications, in that men have doubled their productivity during confinement while women, conversely, have decreased ". "It is one more indicator."

Furthermore, "all the studies that have been carried out on teleworking have shown a greater intensity of work for women, who were interrupted on many more occasions than men in the same situation. That is why it is very important to include the poverty variable of And for that we would need the time employment survey that Eurostat has homogenized for almost two decades to be carried out with the periodicity that is scheduled: in the previous crisis, the PP Government did not do it and we have already been several years For example, we cannot really see the effect that the 2008 crisis had, especially in 2011, on the use of time as a result of austerity, because for the INE at that time it was not at all interesting. "

According to the Socialist MEP, "combating inequalities is a central policy, generating a growth model that is not only less predatory with the environment, but above all combats inequalities. The top 10% account for 52% of income and income. 76% of wealth. The bottom 50% concentrates 8.5% of income and only 2% of wealth. "

"For this reason", concludes Gálvez's presentation in the report of the European Parliament, "it is even more essential to integrate the gender perspective at all levels of the EU budget process, in such a way that income and income are transformed. spending on social investment to achieve gender equality objectives, such as the fight against female poverty ". And this "is closely related to the review of current economic and social governance which, far from austerity, should aim to reduce gender inequalities and female poverty."