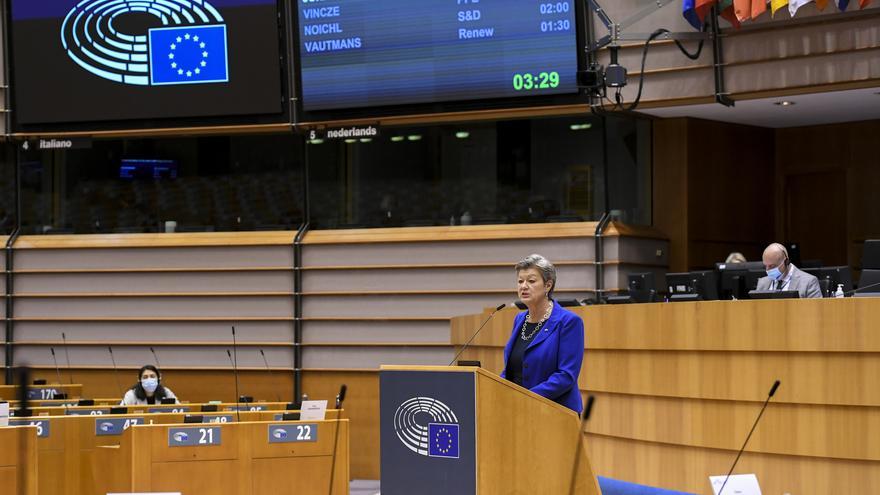 The European Parliament calls for prosecuting the “demand” for “services” offered by victims of trafficking, classifying them as a criminal offense. And it also warns that “the lack of safe and legal migration routes for asylum seekers increases their vulnerability to trafficking.” This is clear from the report approved this Tuesday prepared by the Civil Liberties Commission (LIBE) and the Women’s Rights and Gender Equality Commission (FEMM). The text assesses the application of the European directive on the prevention and fight against trafficking in human beings and the protection of victims, and focuses on the gender dimension of trafficking, especially for the purpose of sexual exploitation; in the situation of migrants and asylum seekers; and in that of minors, especially those unaccompanied.

The report maintains that the directive “has not been implemented satisfactorily, in particular due to incomplete or incorrect transposition.” And it points out that “sexual exploitation remains the most frequent form of trafficking in the EU since 2008 (60% of cases)”, and that more than 92% of these victims are women and girls.

The text considers that “the root causes of human trafficking remain insufficiently addressed.” And it adds: “Gender inequality, poverty, forced displacement, unemployment, lack of socio-economic opportunities, lack of access to education, gender violence, discrimination, marginalization and corruption are some of the factors that contribute to making people, especially women and children, vulnerable to trafficking. ”

The resolution also maintains that, “although there are many forms of trafficking, all of them are based on the abuse of the inherent vulnerability of the victims and are aimed at the exploitation of human beings, and that the victims of human trafficking are found in different legal and illegal activities, including, but not limited to, the agricultural sector, food processing, the sex industry, domestic work, manufacturing, care services, cleaning, other industries (in particular, the industries of services), begging, crime, forced marriage, online and offline sexual exploitation, illegal adoptions and trade in human organs; that other forms of trafficking remain underreported and underreported, including some highly determined by gender, such as forced marriage and domestic servitude. ”

“Trafficking in human beings is one of the worst forms of organized crime,” recognized the European Commissioner for the Interior, Ylva Johansson, in her speech to the plenary in Brussels: “I will examine the possibilities of criminalizing the use of exploited services.

The socialist Juan Fernando López Aguilar, president of LIBE and rapporteur for this report, emphasizes correcting “some gaps in the application of the law, such as the problem of identifying victims, mostly sexually exploited women, or the prosecution of consumers of the sexual services of trafficked women “.

“The directive states that the member states will consider including the use and consumption of victims of trafficking in their criminal codes,” says López Aguilar: “We propose a more effective harmonization and that all member states explicitly criminalize the services provided by the victims, especially, of sexual exploitation. It cannot be ignored that the landscape of sexual exploitation in the EU is cruelly primed on trafficked women. ”

The head of the Podemos delegation, María Eugenia Rodríguez Palop, vice president of the FEMM commission, states: “Human trafficking is one of the most despicable crimes that occurs in the European Union. Almost 75% of the victims are women and girls, most of them for the purpose of sexual exploitation, but we are also talking about slavery on farms, household servitude, surrogacy, begging and forced crime … Ten years after the approval of the Directive, its implementation is very poor , most of the victims are still invisible and we do not have a system that really protects them. This is due to the scarcity of data, the lack of tools and teams trained to identify and protect them quickly and the situations of extreme vulnerability that they experience , which make them unable or unwilling to report for fear of reprisals. But above all it is because trafficking is a profitable business: if there is an ‘offer’ it is because there is an atrocious ‘demand’ that sustains it, a demand for human beings to be exploited ”.

The MEP for Citizens, Soraya Rodríguez, also a rapporteur for the report, said for her part in the debate: “With the implementation of the directive against Trafficking in Persons, we call for a holistic approach to the fight against this crime. Victims need justice and reintegration and to protect them, we have to identify them. We call for a strong political push among the Commission, European Agencies and Member States to end this horrible crime. States must criminalize the conscious use of services provided by victims of trafficking. ”

Vox MEP, Margarita de la Pisa, has focused her speech in the debate on “illegal immigration”. The representative of the extreme right has also lashed out against what they call “gender ideology.”