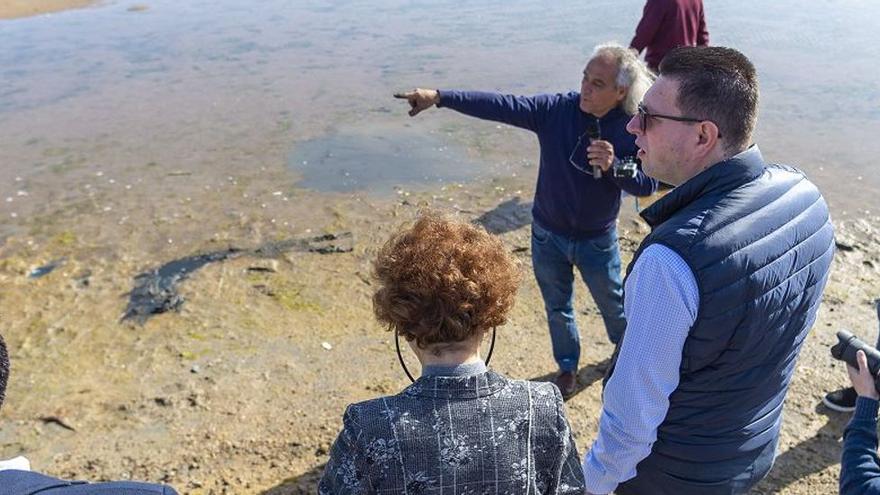 With mud on their heels, the delegation from the Committee on Petitions of the European Union and the MEPs were able to verify live yesterday the degradation of the Minor Sea. Even touching it, because they did not miss the opportunity to take handfuls of black ooze, smell it, and take photos and obtain a sample to return to Brussels with evidence of how touched the largest salt lagoon in Europe. What was observed was worth them to conclude later, and with the presence of scientists and social groups in two meetings that they held in Murcia, that the laws that should protect the lagoon have not been complied with.

Whether intentional or not prior cleaning of some of the beaches visited, the truth and truth is that under the neatness of the clean and smooth sand was the silent enemy: the decomposition of the organic matter that has been accumulating on the shore. On other beaches, the workers directly continued to scoop up algae and mud.

On the second day of the European delegation inspecting the Mar Menor, Its members visited several points, beginning with the Alemanes beach and continuing with the Marchamalo or Los Urrutias salt flats, a stop expected by the petitioners. The director of ANSE, Pedro Garciawas in charge of showing the mud hidden behind the first superficial layer of sand, all this under the watchful eye of the president of the commission, Tatjana Zdanoka, and also the Minister of the Environment, Antonio Luengo.

The visit continued through the salt flats of Marchamalo and had its high point in the mouth of the Albujónwhere both Ecologists in Action, ANSE or Pact for the Minor Sea on the one hand, and the Minister of Agriculture and Environment, Antonio Luengo, tried to explain from different positions the problem of the flow of water with nitrates that runs through this point.

Luengo denies a previous cleaning of the beaches

It is a complex legislation but the most restrictive to protect the lagoon. Counselor Luengo yesterday tried to defend the regional regulations of the Mar Menor and made it clear that there was no prior action to beautify the beaches: “Ignorance is demonstrated” by the groups and MEPs who accused the Community of taking great care in cleaning the shores.

The counselor once again demanded the Zero Discharge Plan to stop the entry of water through the Rambla del Albujón and does not expect a new round in the regulation of agricultural activity in Campo de Cartagena. Regarding this activity, he points out that 215 sanction files have been opened and 11,000 hectares inspected in the region.

Back to the capital MEPs started another round of consultations, as they did yesterday, with a first appointment with the scientists who have worked for years in the Mar Menor. They were very clear about what they wanted to ask, sources present at the meetings pointed out. So much so that, in the questions raised, the committee questioned whether the successive laws that have regulated a regulatory framework to protect spaces like this, and more specifically the Law of Protection and Aronization of Uses of the Mar Menor of 1987, the one of urgent measures of 2018 or the current one of 2020, have been fulfilled given the current state of the lagoon.

MEPs also tried to carry out a more in-depth analysis of the compatibility of agriculture in the Mar Menor basin with the salt lagoon. As for the origin of the problem, the division between scientists was palpable: while the professor of Ecology at the UMU, Ángel Pérez Ruzafaput the accent on the high water table of the aquifer and the discharges of water with nitrates that it produced, other scientists such as Juan Manuel Ruiz from the Spanish Institute of Oceanography, Francisca Giménez from the University of Alicante or Gonzalo González Barberá from Cebas pointed to the entrance excessive nutrients caused by agricultural discharges in the basin.

The issue of competences came up again for debate between the members of the commission and those invited to the meeting, specifically with the groups in defense of the lagoon that later met with the MEPs. They have made it clear that most of the powers over the ecosystem and the region of Campo de Cartagena correspond to the regional government.

Farmers feel part of the solution: "Don't put the focus on us"

The last meeting of the delegation of the Committee on Petitions of the European Parliament in Murcia it was with the farmers. Representatives of the organizations COAG, ASAJA, UPA and FECOAM attended a meeting with the commissioners and MEPs where they wanted to make them see the compatibility of the agriculture of the Campo de Cartagena with the Mar Menor, an issue on which the parliamentarians had influenced in recent two days. They are aware that the neighborhood and environmental organizations that demanded the presence of this commission in Murcia have shown a version "very opposed" to theirs: "something that has surprised them," acknowledges José Miguel Marín, president of COAG Murcia. “It is necessary that they listen to us and that they understand that we are committed to sustainable agriculture with the environment.”

According to the reconversion of agricultural activity in the Mar Menor basin demanded by several organizations, Marín pointed out that this has been taking place for more than 15 years. "You cannot focus only on the agricultural sector, we are part of the solution." Santiago Martínez, from Fecoam, called for coordination between administrations as the "only solution" to recover the Mar Menor. In his opinion, it cannot be expected "that whatever the regional government does, the State will arrive and take the matter to the Prosecutor's Office. We have to force them to come to an agreement." Alfonso Gálvez, general secretary of Asaja, also criticized the State that the Region has been carrying since 2016 "with a Zero Discharge plan drafted and approved and they are not capable of executing it."

One of the main retail associations in the United Kingdom has demanded explanations from the company Gs Group, whose subsidiary in Spain (Gs España) is charged in the Topillo case for contaminating the Mar Menor. "We are working closely with the supplier to understand the current situation," the British Retail Consortium tells a local magazine. The firm's owner, David Abram, faces three and a half years in prison.