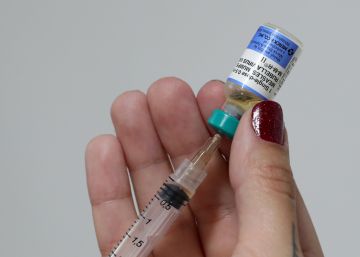 European Commission and the World Health Organization (WHO) Today, the first Global Summit on Vaccines is being held in Brussels with which both institutions intend to “stop the progress of infectious diseases such as measles” favored by anti-vaccine movements and the spread of fake news throught social media.

Measles, an easily preventable viral disease with two doses of vaccine, caused between January 2016 and last March 84 deaths in the 31 countries that make up the European Economic Area (the 28 of the EU plus Norway, Iceland and Liechtenstein) , a figure well above the 60 lives claimed in the previous 16 yearss.

"It is inexcusable that in such a developed world children die from diseases that have long been eradicated," said Commission President Jean-Claude Juncker. With its step forward, the European Executive assumes political leadership in the fight to reverse the fall in vaccine coverage recorded in recent years. "The worst part is that we have the tools in our hands and we are not achieving good results," Juncker added regarding vaccines.

Tedros Adhanom Ghebreyesus, Director General of WHO, wanted to highlight the paradox that while in less developed countries millions of children do not have access to the vaccines they need, in Europe and the United States it is false news and unfounded fears those that prevent its immunization. “We are in a critical trend change. Measles has returned and one in 10 children does not receive the essential vaccines, ”Adhanom said.

The fight against fake news, "As dangerous as the diseases that help spread" According to the WHO, it occupies a central place in the agenda of this Thursday, with the presence among the speakers of managers of social networks – Jason Hirsch, of Facebook – and Internet search engines – Maud Sacquet, of Mozilla.

For the Commissioner of Health of the Union, the Lithuanian Vytenis Andriukaitis, "false news, half-truths and messages to confuse the population, multiplied through certain channels, are a threat to the citizens we must face with new and precise strategies. "

Bad data has accumulated in the last five years in the EU to form a real avalanche. WHO warned two weeks ago that the 53 countries of its European office (including the former soviet republics) had registered almost 90,000 cases of measles in the first half of the year, more than in all of 2018. Of these, more than 10,000 were in the EU member states, with France and Italy in the lead.

Of the seven countries in the world that have lost the status of "measles-free country" in the last three years, according to the WHO surveillance system, four are European (United Kingdom, Czech Republic, Greece and Albania). And the recent data of the Eurobarometer of April have turned on all the alarms in Brussels. "Almost half of Europeans, 48%, believe that vaccines can cause serious side effects, 38% think they can cause the disease they protect against and 31% believe that vaccines weaken the immune system," he summarizes the documentation delivered during the summit.

The underlying problem, EU sources admit, is the low vaccination coverage, the result of the explosive mixture formed by the anti-vaccine movements, the lack of specific policies and, in some countries, the lack of health systems. There are fewer and fewer countries that make all their cohorts – the population born in a year – reach 95% immunization considered safe with two doses of the triple viral, which protects against measles, rubella and mumps. If a decade ago they were almost twenty, today they are less than half, according to these sources.

Even in Spain, a country with good vaccination coverage, where measles outbreaks are always related to imported cases and in which the virus has not been circulating for years, the Spanish Society of Epidemiology has warned that the second dose of The vaccine does not reach 95% coverage among children in some groups, especially the most disadvantaged.

"It is true that political leadership has been lacking in recent years and this summit aims to regain momentum," he admitted yesterday in a previous meeting with the Andriukaitis media. “It has cost all the actors involved to assume the seriousness of what was happening. Terrorism, security … there have been other issues occupying the top of the agenda. But today everyone shares that infectious diseases are also a serious threat to citizens, ”he added.

The WHO has placed this year the reluctance to vaccinations – defined as the rejection or delay in accepting one's own immunization or of the children – as one of the 10 greatest threats to health global. The heads of the UN health agency and the EU are now looking for ways to overcome these reluctance, fearing that the rejection of vaccines will spread increasingly among more population groups and other immunizations that have not yet seen so questioned its safety and effectiveness.

The authorities wanted to give maximum importance to the summit, as evidenced by the presence this morning of Queen Matilda of Belgium at the opening of the work sessions. Among the attendees who will take the floor are also the young American Ethan Lindenberger – turned into an icon after rebelling against his anti-vaccine mother and get immunized at age 18; leading scientific figures such as the director of the Pasteur Institute of France, the British Stewart Cole; and up to 400 personalities from the medical, academic and responsible world of the main international organizations involved.

The chasm of the Challenger, a descent into Hades