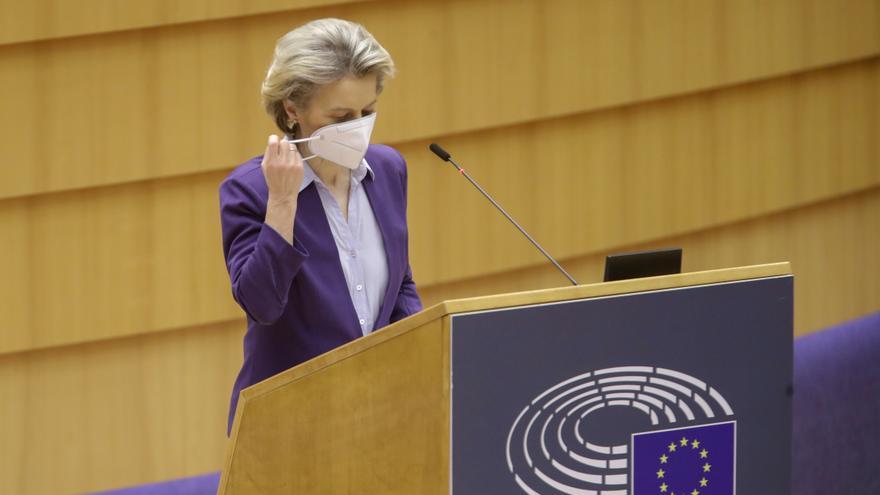 The President of the European Commission, Ursula von der Leyen, has intoned the mea culpa before the European Parliament. The plenary session of Brussels debates this Wednesday for more than four hours the vaccination process in the EU, shaken by the reduction in the delivery forecasts of AstraZeneca, by the slowness of vaccinations in the Member States, by variants and uncontrolled mutations, as well as by the hitting of the new wave of the pandemic.

“It is a fact that we are not where we want to be in the fight against the virus, we were too optimistic about the mass production of vaccines. And perhaps we were too sure that what we asked for would be delivered on time. We have to ask ourselves why this is so and what lessons can we learn from it “, Von der Leyen has recognized in German, a country where there is a debate within the CDU / CSU, between the Government of Angela Merkel and one of the aspiring candidates for the federal elections in autumn, the Bavaria President and CSU Leader Markus Söder on the decision to purchase vaccines jointly within the European Union.

“I do not even want to imagine what it would have meant if a few important Member States had obtained the vaccine and the rest had come out empty-handed,” insisted the president of the Community Executive, in line with what advanced to political groups in the previous days: “What would it have meant for our internal market and for the unity of Europe? It would be an economic catastrophe and the end of our community.”

In any case, Von der Leyen has stated that there are lessons to be learned from this process: “We need to improve the exchange of clinical trial data with the European Medicines Agency. [EMA, regulador encargado de autorizar las vacunas]We will work on a regulatory framework to allow the EMA to review vaccines as quickly as possible. ”

“Another lesson to be learned,” said von der Leyen, “concerns mass production of vaccines. We have underestimated the difficulty of mass production. It usually takes five to ten years to produce a new vaccine. We did it. in ten months, and it’s a great scientific achievement that we should be proud of. ”

The president of the Socialists in the European Parliament, Iratxe García, has pointed out the “disappointment” and “distrust” that the delays are causing.

In this sense, the president of the European Commission maintains that “science has surpassed industry, the production of new vaccines is a very complex process. It is simply not possible to set up a production plant overnight. Furthermore, these vaccines have up to 400 components, and production involves up to 100 companies. ”

And then there is the threat of variants and mutations. “We still do not have the complete picture regarding the effectiveness of treatments and vaccines in new strains. But we know that these variants will continue to appear”, acknowledges Von der Leyen: “We all know that the information we have about the virus and vaccines can change every hour. ”

Regarding the diplomatic crisis with London over the threat to impose controls in Ireland to prevent the leakage of vaccines from the EU to the United Kingdom, Von der Leyen acknowledges that “mistakes were made in the process that led to the decision.” “I am deeply sorry,” he said: “But in the end, we did well. And I can assure you that my Commission will do everything possible to protect the peace in Northern Ireland. As it has done throughout the Brexit process.”

Thus, the president of the popular in the European Parliament, Manfred Weber, has opened the door to greater controls on exports to guarantee products within the EU.

“There is no room for mistakes”, declared the president of the liberals Dacian Ciolos (Renew Europe) in the debate.

Greens co-chair Ska Keller said, “We will not overcome the pandemic while retreating to national selfishness. The ambition to tackle this crisis together and administer vaccines together, ensuring equal access for all citizens It was and still is the correct recipe. No one is protected against COVID-19 until everyone is protected. We cannot allow this virus to exacerbate global injustices. The EU must take responsibility and show solidarity. ”

The toughest intervention has come from the Left (GUE / NGL). The co-president, the French Manon Aubry, has severely criticized the big pharmaceutical companies, showing in plenary session one of the censored contracts that the European Commission has made public with erasures.

“I question the President of the European Commission, Ursula Von der Leyen, about her disastrous management of the vaccination strategy. Opacity of contracts, delays in delivery, record profits from laboratories, privatization of patents”, said Aubry .