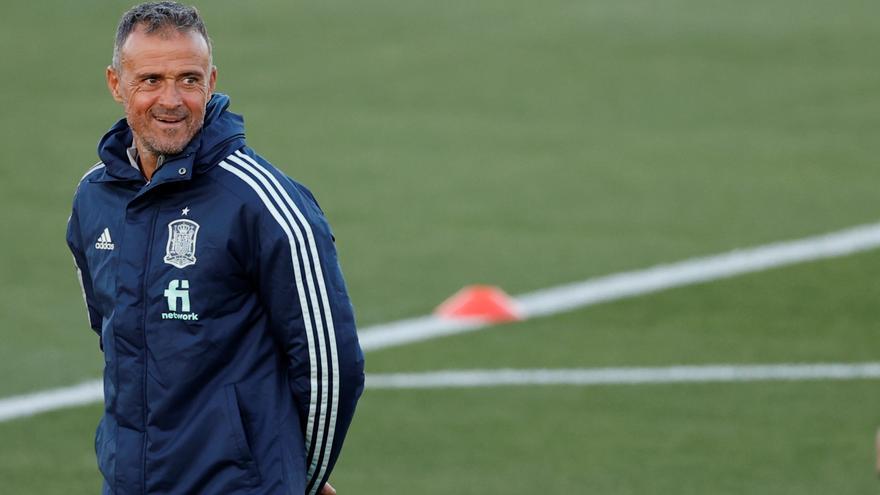 The reigning European champion, Italy, owner of a world record of unbeaten that already reaches 37 matches, represents a great challenge for the Spanish selection, who seeks his first League of Nations in a final to four to which he arrives conditioned by significant losses, but with the nerve to seek success in the second final phase with Luis Enrique Martinez.

Punished for injuries, Spain is reunited with the team that left him at the gates of the final in a Eurocup that confirmed an indisputable growth of the group of elect of Luis Enrique. Since that night at Wembley at the beginning of July, the football exhibition without a prize and the failures in the penalty shoot-out of Alvaro Morata and Dani Olmo, three months have passed in which he has gotten into trouble in the qualifying phase for the 2022 World Cup.

And Luis Enrique took a new turn in search for a regularity in the results that cannot be found, opting for young values, represented by Gavi, 17, and Yeremy Pino, 18, as the last personal bets of the coach, rather than the experience of footballers accustomed to playing greatness matches. The Dani Parejo, Iago Aspas or Ander Herrera have not had a place in a group with numerous changes due to injuries.

Spain faces the challenge of getting the first official victory against Italy on their land, they only beat them in two friendlies, with losses of the importance of Jordi Alba, José Luis Gayá, Raúl Albiol, Dani Carvajal or Marcos Llorente in defense; the unbalancing factor in which Pedri and his substitute, Carlos Soler, became a midfield to which Thiago, Sergio Canales and Brais Méndez cannot be added; and with a forward who longs for fixed lines like Dani Olmo, Álvaro Morata, Ansu Fati or Gerard Moreno.

Until fourteen absences due to physical problems which are a slab, they condition Luis Enrique’s plans in a final phase that Spain won brilliantly, with an unforgettable finale in the 6-0 win over Germany, and they show that current football must turn its calendar to reduce the number unacceptable of matches by footballers.

The coach’s plan is to repeat the strategy of the last duel against the ‘beautiful Italy’ who ended up being the European champion and go out for the match. In London he managed to blur his rival by pressing up and intends to steal the ball from Italy at home to improve the final phase that was missing to be the champion of Euro 2020. He will do it without a pure 9 in the call, with Ferrán Torres as Offensive and scorer reference, escorted by LaLiga’s top national striker, Mikel Oyarzabal, and Pablo Sarabia’s option to retaliate for the bitter taste in his mouth that allowed him to miss the July appointment due to an injury in the quarterfinals. Yeremy Pino is the alternative.

The entrance of Sergio Reguilón in the left lane and Mikel Merino in the center of the field, with the option of Gavi becoming the youngest debutant in the history of the national team at 17 years and 60 days, they would complete a Spain that has only lost one of its last nine games against Italy.

After the growth of Euro 2020, he faces the major challenge of winning a title again nine years later. Since the exhibition in Kiev, in the final of Euro 2012 with the defeat of Italy (4-0), the end of the ‘golden generation’ took a step to a transition in which the national team walks with Luis Enrique at the helm.

Italy arrives at the San Siro appointment with the obligation to reinvent its lead in the face of the losses of Ciro Immobile and Andrea Belotti, who join those of three other European champions, Leonardo Spinazzola, Matteo Pessina and Gaetano Castrovilli. Without a pure nine, Federico Chiesa will be the leader of a dynamic offensive trident, without fixed positions, which will be completed with Lorenzo Insigne and with one between Lorenzo Pellegrini, Domenico Berardi and Federico Bernardeschi.

The suffering experienced against Spain at Wembley could convince Roberto Mancici to bet on Pellegrini, who lives a great moment of form in Roma and who would guarantee more possession of the ball in the center of the field, something that the “azzurri” completely lacked in the European Championship.

Pellegrini would also protect a line of three from the center of the field in which Marco Verratti, Jorginho and Nicoló Barella will play, while up front Insigne would alternate his position in the center with Chiesa. The Juventus winger already saw the door against Spain in the European Championship and has scored two decisive goals this season, against Spezia, to give his club the first league victory, and against Chelsea, European champions. His speed, physical power, technique and personality make him the true offensive star of a team that sees the unity of the group and the tactical identity given by Mancini as its point of strength.

The ‘azzurri’, who surpassed Spain’s record for games without defeats in September (35), when they reach 37, they will be entrusted to the San Siro fort, where they have not lost for 93 years and 28 games. Of course, the last five meetings of Italy in Milan ended in draws, including the World Cup play-off against Sweden that prevented qualification for the 2018 World Cup in Russia.