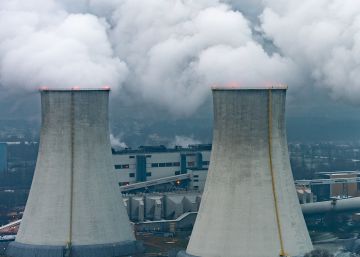 Europe gives solemnity to the ambitious agenda with which it intends to combat the worrying deterioration of the environment. He European Parliament approved on Thursday with 429 votes in favor, 225 against and 19 abstentions a resolution in which it indicates that the planet is experiencing a "climatic emergency". The declaration aims to become a wake-up call to the European political class to redouble efforts to curb global warming, as well as transmit to European citizens, especially young people who have demonstrated on the streets of the entire continent, the idea that your cry has been heard.

MEPs also agreed in parallel to ask the European Commission to raise the objective of reducing carbon dioxide emissions by 2030 from 40 to 55% compared to the 1990 threshold. An intermediate step to achieve climate neutrality by 2050 and thus maintain the planet's temperature rise below 1.5 degrees compared to preindustrial levels.

The moment chosen by the MEPs to make that double harangue could hardly be more propitious. This week it was known that the concentration of greenhouse gases in the atmosphere set a new record in 2018. The climate summit of Madrid starts in just a few days. And the new European Commission headed by Germany's Ursula Von der Leyen, is just going to start equipped with a powerful green program whose first announcement, 5,000 million for the coal zones affected by the climate transition, it is already on the table.

The adoption of the "climate emergency" formula has not been without controversy. The proposal was born from Pascal Canfin, French MEP of the Emmanuel Macron party enrolled in Renew Europe. The Greens, who seek to maintain hegemony in the defense of the environment at a time when other parties begin to assume much of their ideology, saw in their initiative an exercise in public relations lacking in substance, and launched their own resolution.

The division of the hemicycle threatened to end up knocking down both proposals, which would have sent the opposite message to the one intended. His driver warned him by calling aside partisanship. "That Europe declares the state of climatic emergency is symbolic. But if we do not vote in favor on Thursday, the message would be terrible. I call on the responsibility of each of the MEPs," Canfin said. Finally, a consensus was reached to merge ideas and the final resolution bore the joint seal of liberals, socialists and greens.

The differences were varied. The European People's Group admitted that humanity is approaching "the point of no return", but in order to give its support, it called for replacing the word "emergency" with "urgency", a way to lower an alarm level that they consider exaggerated. "Emergency would imply that it is a situation of widespread panic or state of exception. And we do not need to panic, we need to act and the rest of the world to act," insisted a popular Europarliamentary in the previous debate. At the time of voting, the popular did not agree, and the group split almost in half, with the Spanish representatives of the PP in favor of declaring the climatic emergency.

Further to the right, the group of Conservatives and Reformists alluded to the European loneliness in climate matters for no declaration. "This is not worth it. China, India and the US are not doing anything for which Europe's effort is totally useless," MEP Pietro Fiocchi warned pessimistically. The formation is a hodgepodge of parties chosen on the right that includes from the Flemish nationalists related to Carles Puigdemont to the Spanish Vox, and like the rest of the extreme right, they opted overwhelmingly against the statement.

Despite the reluctance, a large majority of the parliamentarians endorsed the underlying idea that it is necessary to take action against climate change. But that did not make things easier, even with the Los Verdes group, which warned in the previous hours of the risk of everything being in mere talk. "It will be historic if we declare the weather emergency, but then we will have to act accordingly. We can declare weather emergencies, but people ask us for actions, not declarations. We already have enough empty statements," said his co-president, Dutchman Bas Eickhout.