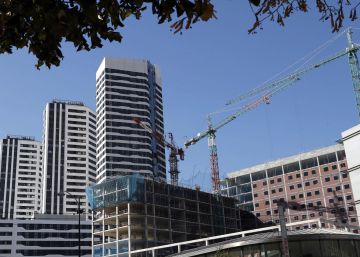 The downhill race of the index that is used to calculate the interest rate of variable mortgages seems to have no end. It started early last summer and has yet to stop, but experts predict that it is about to. It was in June when the Euribor took the downward path that since the -0.081% registered the previous month (its summit from December 2016), has led it to close this month at -0.504%, its sixth consecutive all-time low, in the absence of Friday’s data. The continuity that the European Central Bank wants to ensure in the coming months to the stimulus policies of the economy will be reflected in the stagnation of the Euribor at its current values. Meanwhile, the effect of its collapse is noted: on the one hand, mortgage loans with variable interest rates are significantly cheaper, and, on the other, the downward pressure that the Euribor indirectly exerts on the price of fixed rates continues .

In this way, if the new variable mortgages become increasingly desirable, the discount that those who review your old loan this month will experience in their monthly payment will be especially good. For a 30-year mortgage of 300,000 euros with an interest rate of Euribor plus a differential of 0.99% (one of the most common), the savings this year will be 373.92 euros or, what is the same, 31.16 euros per month, since the fee will go from 929.60 euros to the current 898.44 euros, according to calculations by the bank comparator iAhorro. This is so because the index this January is 2.5 tenths of a point below the level it was at a year ago (-0.253%).

In this context, to weather the reduction of profit margins for this product, banks will continue to bet on the fixed rate —Which guarantees them higher income— through very attractive offers. For this reason, the director of Mortgages at iAhorro, Simone Colombelli, says he is convinced that now “there is a great opportunity to take out a fixed mortgage and take advantage of unusually low interest rates forever.” On the contrary, in his words, variable mortgages are undoubtedly “an interesting product”, but more “for a profile that does not have much aversion to risk and that wants to pay off its loan in 10 or 15 years, at most”, and thus avoid the effects of a possible long-term rise in the Euribor.

The comparator also predicts the consolidation of subrogation operations, that is, the transfer of the mortgage from one entity to another, in exchange for more favorable conditions for the user. “Taking into account how the recent evolution of the Euribor has affected mortgage interest rates, we are faced with a wide spectrum of improvement options”, underlines Colombelli, who states: “In times of greatest economic difficulty, users look for all the ways to increase their savings, so it is not surprising that they also try through their mortgage. “

But how long can it take for the Euribor to get close to that positive terrain that he abandoned almost five years ago? “Years”, they comment from the sector. For the moment, the index has moderated the decline and in January it fell only 0.7 basis points compared to December (-0.497%). “Its floor is -0.50%”, ditches Joaquín Robles, analyst at the financial broker XTB. As the Euribor is the interest rate at which European banks lend money to each other, it would not make sense for them to do so at a price higher than the one charged by the ECB to keep the excess liquidity in their coffers, that is, that 0.50%, since the guarantees offered by the supervisor are insurmountable.

So Robles rules out that the Euribor could fall further, although he does not see a consistent rise in the short term either. Rather, the index would move stably over the next few months around the threshold reached in January, until there is some relevant change in Frankfurt policy. “This trend is going to continue, because the ECB will maintain liquidity injections to the banks until at least June 2022, at much more advantageous rates than interest and deposit rates,” says Robles.

The ECB, without news

It is true that the governor of the central bank of the Netherlands, Klaas Knot, in an interview with Bloomberg on Wednesday said that the ECB “still has room to cut rates” and bring interest rates to -0.10% or the rate deposit at -0.60%, for example. In this case, the Euribor is likely to find a new bottom at -0.60%. However, “this is not going to happen,” according to Robles. “Last week, after the supervisor’s meeting, Christine Lagarde [presidenta del BCE] She said that she would continue to monitor the situation, that she was concerned about the third wave of the pandemic, that she would continue to maintain debt purchase programs if possible, and that she is doing everything in her power. It cannot do more ”, emphasizes this analyst.

For this reason, in his opinion “the banks are going to continue with the current excess of liquidity, and the economy, waiting for that rebound that is being discounted so much in the equity market. There is already talk of the second half of 2021, by the vaccine delay Y the third wave of infections, so there will be no news in the Euribor for the remainder of the year ”.