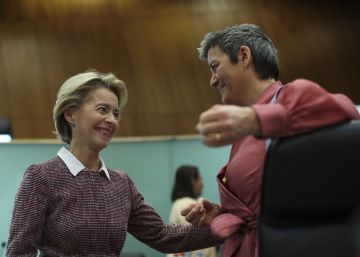 The European Union will mobilize more than 26,000 million euros annually to dispute the world battle in the technology business, whose contenders so far have been the United States and China. Brussels believes that the second digital revolution will occur in the industrial field. Therefore, this Wednesday launched a strategy to create a common space for data and a regulatory framework for artificial intelligence.

The president of the Community Executive, Ursula von der Leyen, demanded to accelerate the digital transition, but with “responsibility” and putting limits on the risks that may arise in sectors such as health, transport, public order or justice.

Brussels admits bluntly that it lost the first major world assault. “We lost the first battle, that of personal data,” admitted Internal Market Commissioner Thierry Breton. That was won by the United States, from whose west coast the great technological platforms that dominate the networks came out: Google, Facebook, Twitter or Amazon. However, the EU is convinced that it can still get on that train. “The battle for industrial data starts now and Europe will be the main battleground,” Breton said.

The continent that illuminated the first Industrial Revolution does not want to see how the data of its companies give rise to businesses in other corners of the world without taking a slice. “We announce that Europe will do everything possible to win this battle,” added the French commissioner. Brussels wants to lay the foundations for a single industrial data market that will build the European High Impact Project that will be built between 2021 and 2027. And for this, Von der Leyen announced 20,000 million to develop artificial intelligence and another 6,000 million for the business of the data.

That project seeks above all to create a powerful European cloud, as stated in a draft advanced by EL PAÍS. The plan is to create this cloud by federating several existing infrastructures, from which to store and manage data. Now, more than 90% of the data generated in the continent is stored in virtual spaces of American or Chinese companies. In parallel, Breton announced that more than 2,000 million euros will be invested in an alliance to create a platform that allows for public data that can be shared.

Not only are the data. It is also important what use is made of them. And that has to do with artificial intelligence. The documents approved by Brussels mark the way in four areas: financing, attracting talent, skills and the deployment of technology. However, the Executive Vice President of the Commission, Margrete Vestager, pledged that Europe is not like the United States or China, but like Europe. Therefore, three objectives were set: that technology be at the service of citizens – “and not vice versa” – that the single market be “competitive and fair” and that European society be “open, democratic and sustainable”.

For this reason, Brussels wants to embark on the career of artificial intelligence, but in its white paper it proposes to put limits on the sectors and activities that it considers to be the “highest risk”, as Vice President Vestager advanced to this newspaper. “We want the application of technology to deserve the trust of citizens and we will be careful with sectors such as health, transport or law,” Von der Leyen recalled. The Commission will now launch a public consultation to regulate this activity and discuss exceptions in which its most controversial aspects could be allowed, such as facial recognition.