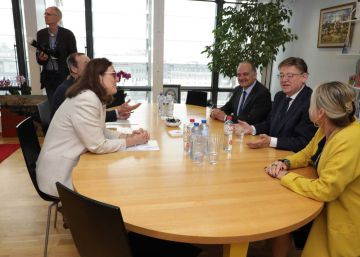 The Treaty between the European Union (EU) and the Mercosur countries (Argentina, Brazil, Uruguay and Paraguay), announced on June 29, will not enter into force before two years, according to the calculations transmitted this morning by the Commissioner of Commerce, the Swedish Cecilia Malmström, to the Valencian delegation, headed by the president of the Generalitat, Ximo Puig. "The treaty will be approved within a year by the commission and subsequently by the European Parliament. So the final approval will not be at least two years, "said Puig after the meeting held at the headquarters of the European Commission in Brussels.The Valencian president had requested the meeting to transmit to the Commissioner the fear of the citrus sector for the damages to the Spanish market that could cause the arrival without tariffs to Europe of the products of Brazil and Argentina.

The largest commercial agreement ever achieved by the Twenty-eight, which will give access to a market of 260 million consumers, will come into force once it is approved by both the European Parliament, predictably in 2021, and the Mercosur parliament. But only the commercial part, the main part of the agreement, because the political association and cooperation, which also integrate the treaty, must also be endorsed by the national parliaments, so that its implementation will be postponed even more. The treaty had been negotiating between the parties for 20 years.

The process is slow and guarantees, as in all agreements of this type. Next week the content of the 1,500-page treatise will be released in its English version. Then the concrete measures will be seen, it will go down to the details like the reduction of the tariffs, to what products affect or the calendar. Then, the agreement must pass a legal revision of the text. Then it must be translated into the 24 languages ​​of the European Union and the commission must approve it and authorize its referral to the parliament. Once in the camera, it must be studied in the International Trade Commission and also in the Foreign Affairs Committee. The Environment Commission must also issue a report and finally, the text will reach the plenary session of the Parliament for approval and will come into force. Subsequently, it will be sent to the national parliaments to approve the agreement of political association and cooperation.

In this interval of two years, the Valencian president has requested to organize a sectoral conference in the heart of the European Commission, with all the affected departments, to deal with the problem of citrus fruits and agriculture in Europe. "It is a problem that does not only affect the Valencian Community and we have to find integral solutions, because not only Mercosur, but also the Russian veto, the South African orange and especially Egypt, we ask for direct action because it can do a lot of unfair competition. Our concern was shown that there is not enough surveillance in the port of Rotterdam, and we must ensure the same phytosanitary guarantees for the European citizen ". However, Puig has also asked the sector to be proactive and promote campaigns, among other modernizing measures.

The sector of the Valencian orange, which moves around 2,200 million euros per year, has been the most critical, together with the French farmer, with the possible negative repercussions of the agreement with Mercosur. The industrial sector, on the other hand, is the one that benefits most from the reduction of tariffs, especially the automobile, textiles, ceramics or footwear. For example, currently, tariffs for Spanish footwear in the Mercosur countries rise to 43%, those of the ceramic industry to 35% and textiles, to 37%. With the entry into operation of the agreement, the rate will be reduced until it is desolated in some cases, and in others it will be reduced significantly, after a transitory period. The deadlines and negotiated details for each sector and for each product are missing.

Puig has dismissed the dialogue character of the commissioner, who has been a key player in the negotiation of an agreement that had been seeking since 1995. Its mandate concludes next November.

One of the possible measures to control and compensate the entry of the merchandise of two of the main producers of oranges in the world, Argentina (in fresh fruit) and Brazil (in juice) is to articulate a safeguard clause that came into operation in the face of the threat and not later, when the product has already invaded the markets. In addition, a compensation fund of about 1,000 million euros is planned.