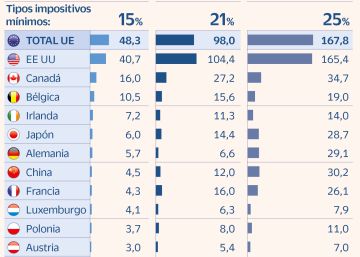 The arrival of Joe Biden to the White House has ended the resistance of the Donald Trump Administration to the imposition of a global minimum rate on corporation tax, proposed by the OECD to end the tax avoidance of multinationals, and has accelerated the options to reach an international agreement in this regard this same summer. Just a few weeks before the debate reaches the G7, the new Fiscal Observatory of the European Union was released yesterday with a comparison of the impact that each of the rates considered would have on the collection, in which it is inclined to establish one of the 25%.

The figure is quite a statement of intent about the pulse that the EU plans to play in the negotiation after Biden's team, which had initially proposed to introduce a minimum rate of 21%, lowered that threshold to 15% a couple of years ago. weeks to iron out the multilateral agreement.

The Community Observatory, which will be based in Paris but which presented this report to the European Commission, analyzes the tax impact that setting a minimum corporate rate of 15%, 21%, 25% and even 30% would have on a global scale . It also studies the effects that agreeing the minimum rate would have only at the community level and, finally, what it would entail as a unilateral decision by different countries.

“If there was an agreement on a minimum tax it would be extremely important, whatever the type, because it would be the first time that there is an agreement. And even if it is 15%, which for me is too low, (...) it could pave the way for higher rates in the future ”, declared the president of the Observatory, the French economist Gabriel Zucman, famous for his research on tax havens. In his opinion, 15% is a low threshold both in the international context, given that the average effective rate is currently around 23%, and in the historical one, since 15% was the level of the mid-1980s. 15 %, he asserted, "is not enough to restore balance and ensure that the winners of globalization, instead of paying less and less, pay more taxes."

If a global pact is not tied and the 25% rate is implemented only on community soil, the extra collection on European multinationals - and the fraction corresponding to foreign ones - would be 200,000 million, of which only 30,000 would come from foreign firms. "For the EU, therefore, there is a much greater potential for income by increasing taxes on EU companies than on non-EU ones," he asserts.

Finally, if the measure were unilateral, the increase in collection would be close to 70%, amounting to 16,700 million in Spain.

The study also analyzes the impact by specific companies. Taking the year 2019 as a reference, it should be noted that a minimum rate of 25% (which is already the nominal rate in Spain) would raise ACS's taxation by 354%; that of Iberdrola 59.7%; that of Repsol 13.8%; or that of Telefónica 70.3%, the average increase being 22% for non-financial European firms.

In the case of banks, which in Spain pay a nominal rate of 30%, the increase would be 45.2% for Sabadell; 11.2% for BBVA; 21% for Santander; and there would have been no costs for Bankia before its merger with CaixaBank. On average, European banks would pay 44.5% more.

"The spiral of international tax competition can stop even if tax havens do not increase their tax rates, and the European Union could be the world leader in this process," concludes the Observatory report.

"Today more than ever, we have to stop abusive tax practices," supported yesterday the Commissioner for the Economy, Paolo Gentiloni, who asked for more income to leave the Covid crisis behind.

What happens if I go on vacation without unplugging the fridge?