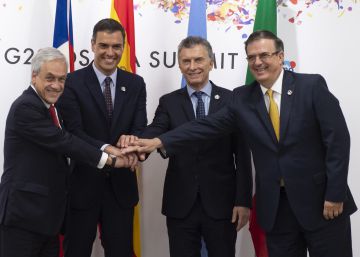 Since Donald Trump took office as president of the United States In January 2017, the news on world trade has been to talk about protectionist measures and to analyze the effects of the braking suffered by global exports. Last weekend, at the G20 Summit, the European and Latin American countries took center stage when signing the free trade agreement between the European Union and Mercosur.

The negotiations began twenty years ago and are a breath of fresh air in a world that is desglobalized by forced marches. The two areas agree to reduce tariffs among themselves and keep them with the rest of the world. The Mercosur countries have access to what is still the world's largest consumer market. And European countries have the potential to increase their presence in an area historically of influence of EE UU and where, in the last decade, China has taken a position.

Latin America stands out for having very little commercial relationship within its area and this agreement is an opportunity to reverse this anomaly. Getting it will reduce their dependence on the US and the power of Trump in the negotiations where they are blackmailed to cut their imports if they do not accede to their requests, which only seek votes to be reelected in 2020.

I write this article from Mexico that sis systematically under the threat of Trump and that concentrates 85% of its exports to the US. Mexico's GDP in the first quarter was negative and forecasts anticipate a drop in investment this year and next. The recession in the US is close and its imports will decrease. Mexico also has a free trade agreement with Europe. López Obrador's new government must look south and lead the process. And it would send a positive signal to investors from outside and inside Mexico to increase investment and employment.

Brazil, which is part of Mercosur and which adds more than half of Latin America's GDP to Mexico, must co-lead the process. The Brazilian economy it is also almost stagnant and its investment on GDP is even lower than that of Mexico. Therefore, it needs even more to find consumers outside its borders, with its neighbors and with European countries, to reduce its dependence on the United States and to diversify with more countries and not only with China. Argentina, Colombia, Chile, Peru, Central America, etcetera. This agreement should be a boost to increase trade within Latam and reduce its dependence on imports from the US and China.

Europe is an aging and sick economy that with the agreement increases the number of consumers so that their companies invest and create more employment. Spain maintains important institutional, cultural and economic ties with the Latin American countries and will be the nexus of union with the Spanish-speaking ones. Portugal will be the link with Brazil. The agreement, led by the Spanish and Portuguese governments, allows Europe to look south and claim its model against the US and China. The future is exciting, the past is uncertain.