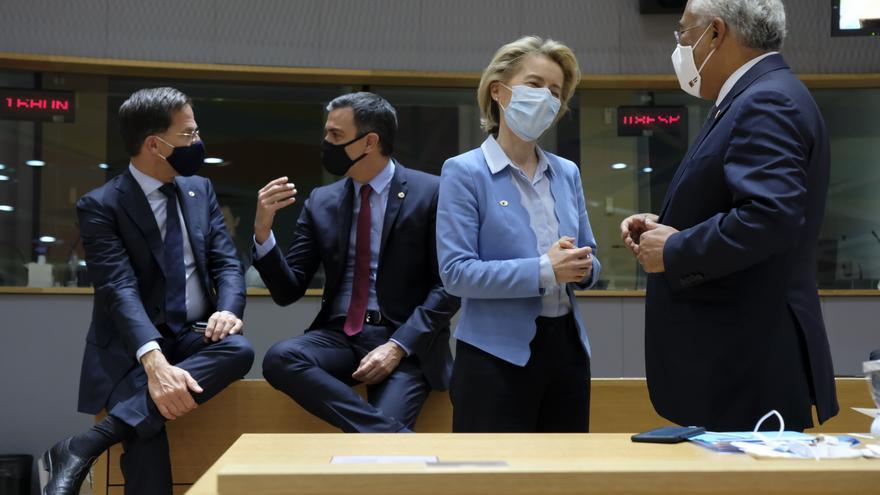 A fund of 750,000 million, 390,000 million in direct aid and 360,000 in loans, to respond to the economic collapse caused by the coronavirus crisis. This is what the leaders of the EU gathered for five consecutive days in Brussels, together with the budget for 2021-2027 of 1,074 billion euros, had to be agreed unanimously - this Tuesday morning.

It will be the first time that the European Commission issues debt for such a volume with the support of the Community budget (triple A in the markets) to transfer it to the States and, also for the first time, it is established that the EU has its own resources in the form of new taxes and fees - carbon, single-use plastic, digital ... - to finance the repayment of that debt.

All that architecture is built from scratch starting this Tuesday. However, it was at the expense of a series of transfers during a summit that will go down in history for having been the longest - if the previous protocol act is discounted from that of Nice in 2000 -. This was announced by the President of the European Council, Charles Michel, at 5.31 this Tuesday. "We have succeeded", said Michel at the press conference after the European Council: "It is much more than money, it has to do with health, progress and work. It takes us to the future, it is the first time that European history the budget is linked to climate goals, the first time funds are linked to the rule of law and the first time a fund is mobilized for a crisis. "

On the one hand, countries like France, Spain or Italy have been giving way since the start of the pandemic, when they demanded the mutualization of the debt in the form of Eurobonds or Coronabonds. Or when Spain produced a non paper in which he put the anti-crisis fund at 1.5 billion euros in transfers, along the same lines as some European Parliament resolutions, which called for a fund of two million euros, "most of which in direct aid."

But direct aid is not with eurobonds, but with bonds issued by the European institutions; Nor do they amount to 1.5 trillion, but to 390,000 million euros, far also from the 500,000 million in transfers proposed by France and Germany, a figure that included the proposal of the European Commission and the one that took the President of the Council to the summit. European, Charles Michel.

In this itinerary, what the agreed proposal does is keep the package at 750,000 million, even if it is rebalancing between direct aid and loans, going from 66% -33% to 52% -48%, which will increase the accumulated debt of countries by increasing the weight of loans and raises doubts about the macroeconomic impact of reducing transfers from 500,000 to 390,000 million.

"It guarantees that the most affected countries are financed for their national recovery plan," French diplomatic sources said at night: "The financing of the debt is historic, and attests to the confidence placed in the European project by the states. members, even though this principle of common debt seemed unthinkable a few months ago. The European budget, thus, is revitalized by doubling the amount of the stimulus plan (almost 2% of GDP) and a change in the budget paradigm " . Thus, the French president, Emmanuel Macron, celebrated the day as "historic for Europe".

On the opposite side during the negotiations since Friday, the one occupied by the so-called frugal -Netherlands, Austria, Denmark and Sweden- and Finland, have seen the foundation being laid for an instrument they did not want - for the European Commission to issue debt to give direct aid– with a volume that they did not want either –750,000 million–. Therefore, the battle in the negotiation has no longer focused on the mere existence of the instrument, but on its characteristics.

While its initial volume has been maintained, but not the proportion of aid and credits, what the so-called frugal have also achieved has been to tighten conditionality and governance, achieving that any country could pull the "super emergency brake" if it believes that the promised reforms are not being applied to block a disbursement for weeks until the summit of leaders - European Council - elucidates, which, in addition to being cumbersome, It gives blocking capacity and can delay urgent projects for up to three months.

However, French sources insist that "any veto has been ruled out; a Member State may refer the matter to the European Council in case of difficulties, without blocking the process of implementing the recovery plan."

The last redaction of this chapter, advanced by Politico, It reads as follows: "If, exceptionally, one or more Member States consider that there are serious deviations from the satisfactory fulfillment of the relevant milestones and objectives, they may request the President of the European Council to refer the matter to the next European Council", according to the text, which points out that "the Commission will take a decision on the evaluation of the satisfactory fulfillment of the relevant milestones and objectives and on the approval of payments in accordance with the evaluation procedure. If the matter has been referred to the European Council, no decision will be taken by the Commission on the satisfactory fulfillment of the milestones and targets and on the approval of payments until the next European Council has fully discussed the matter.This process, as a general rule, will not take more than three months after the Commission has asked the Economic and Financial Committee for its opinion. "

But not only the so-called frugal have achieved this strengthening of control and governance, they have also managed to maintain and improve the rebates, the famous compensatory checks that Margaret Thatcher started in her day and that were condemned to disappear after Brexit. But that the Netherlands and her club have managed to increase to 52,836 million euros in seven years. "It does not fully meet France's expectations, but it is part of the balance of negotiation and compromise. This is a principle that France wishes to be able to gradually return to," the sources say.

On the other hand, the Netherlands and its allies have lost the battle for the multi-annual EU budget to be 1.05 trillion euros, while it will be 1.074 trillion. As the fund hangs from the Multiannual Financial Framework and the European Commission has to go to the markets to finance those 750,000 million - which do not come out of the piggy bank of any country -, the ceiling of spending is extended so much that the 27 national Parliaments have to give the go-ahead, along with the new taxes, in a process that will take weeks. Finally, the European Parliament must approve an operation that rises to 1.82 trillion, an unprecedented figure.

"Regarding climate conditionality," say French sources, "the requirement of a 30% target for climate spending in the budget and the recovery plan has been incorporated into the proposal for the recovery plans of the States Members include measures consistent with green transition goals and pledge not to finance expenses that have a negative impact on the climate ("Do no harm" principle).

In this game of trileros, the president of the European Council, to keep the part of direct aid directly dependent on the Recovery and Resilience Facility - which now rises from 560,000 million to 672,000, divided between 312,500 in aid and 360,000 in credits - It has cut the contribution of the recovery fund to the multi-annual budget of the European Union for 2021-2027.

Thus, almost 80,000 million disappear, with large cuts in the Just Transition Fund - designed to help decarbonise Europe -, whose contribution goes from 30,000 million to 10,000; all the contribution to the Health program; the additional budget for Rural Development loses half of its original size and is reduced to 7.5 billion; the European R&D program (Horizon Europe) would only benefit from 5 billion from the recovery fund (compared to 13.5 billion proposed by the European Commission) and the community investment program (InvestEU) receives 5.6 billion from this plan.

Regarding the own resources for debt repayment, the last text mentions the proposals of the European Commission for the financing of "own resources": carbon tax, the digital rate, taxes on single-use plastics, but does not include the tax on multinationals, although the tax on financial transactions.

In relation to the multiannual budget, the document includes an increase in the amount allocated to the Single Market, Innovation and Digital to 132,780 million - before it had 131,280 million; Cohesion, Resilience and Values ​​falls to 377,770 million - it had 380,080 million -; Natural Resources and Environment has increased to 356,370 - before they were 355,620 million -; Border and Migration Management remains constant at 22,670 million, as does Security and Defense at 13,180 million, as Politico has advanced. Neighborhood remains at 98,420 million, while the European Public Administration remains at 73,100 million.

Time will tell whether this tool, designed for the current crisis and "temporary" as required by the so-called frugal, will have life beyond the crisis - in addition to debt repayment - and if these own resources will actually be approved and what tour will have. "The scope of this change must be measured: Europe is capable of doubling its budget in the event of a crisis; and it creates a common debt that allows solidarity," say French sources.