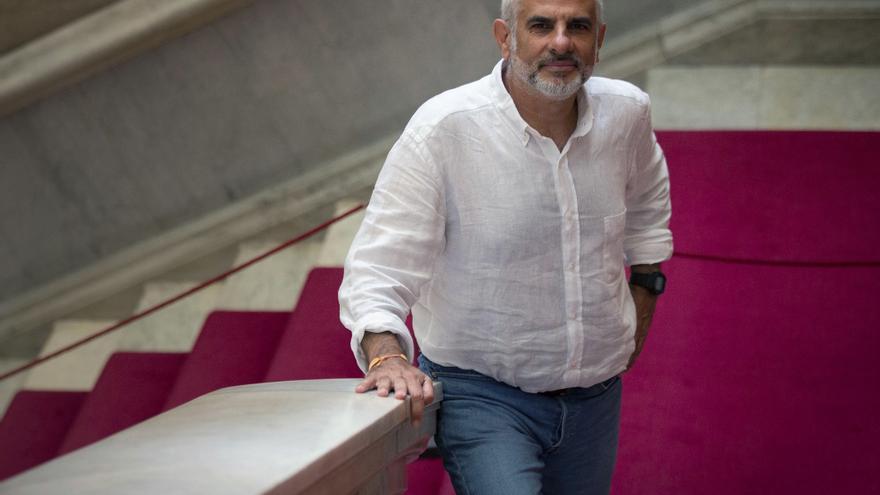 They say it was only a matter of time, that Inés Arrimadas wanted it to be Carlos Carrizosa (Barcelona, ​​1964), her faithful squire in the Parliament during its hardest stage, and not Lorena Roldán, who would occupy the candidacy of Citizens for the Generalitat de Catalunya . And in the end it will be like that although the challenge comes to the veteran Catalan leader at the most adverse moment for the formation.

The appointment of Carrizosa this Wednesday by the Party’s Standing Committee has been the first far-reaching decision that Arrimadas has made on his return from maternity leave. The decision has been endowed with unanimity and good words by even the defenestrated woman herself –“It was a decision taken as a team”, said Roldán–, who just a year ago won the primaries and was designated as headliner for elections that still have no date. At that time, the party was still chaired by Albert Rivera, Roldán’s main defender. Carrizosa did not want to overshadow him and did not appear for the contest.

Although there are many who agree that Carrizosa is a candidate with a more suitable profile than Roldán to face key elections in the territory where the party was born, the procedure for his appointment has not been liked by everyone. “The Statutes do not contemplate it. It should have been presented as a decision by Lorena to renounce the candidacy and announce later that Carrizosa was running for new primaries, “says a leader critical of the management.

At the top of the game there is nervousness. And hurry. Despite the fact that Quim Torra has not yet set a date for the elections, the climate in Catalonia has been pre-campaign for many months. And the internal polls that the party handles and those that have been published in different media are not encouraging at all for Ciudadanos. From being the most voted force in 2017, with Arrimadas as a candidate, it may go on to become one of the last in Parliament. A severe setback, if the forecasts are fulfilled, for the new leader of the formation that has not achieved representation in Galicia and obtained two seats in the Basque Country thanks to being in the starting position after the coalition agreement closed with the PP, which he was the big loser.

The polls have influenced this change of faces in Catalonia: the latest barometer of the Catalan CIS points out that Carrizosa is a leader better valued than his partner in the ranks by voters, not only from Ciudadanos but from the PP itself. The decision could not be delayed much longer when it remains to be seen whether these parties will go to the polls separately or with a joint candidacy, as they did in the Basque elections.

Since the arrival of Arrimadas to the leadership of the party, there were many who warned that to overcome these polls a leader with a greater “punch” was needed, a “tough” like Carrizosa whose clashes with Quim Torra and the Government have been sounded. The image of the leader of Ciudadanos tearing yellow ribbons from the seats o His expulsion from the Chamber of Parliament by the president, Roger Torrent, after one of the most harsh plenary sessions of this legislature, made his figure grow between his colleagues and the militancy. Within the party, some even equate their political style to that of Cayetana Álvarez de Toledo, the recently defenestrated PP parliamentary spokesperson. An image of ‘tough’ that does not correspond to the friendly and close treatment that characterizes Carrizosa on a personal level.

Carlos Carrizosa is not an upstart. Born in Barcelona 56 years ago and a lawyer by profession, he has been a member of Ciudadanos practically since its foundation in 2006. He was forged in Catalan politics in the shadow of Rivera. In 2012 he held a seat in the Autonomous Chamber for the first time together with other historical figures from the party such as José María Villegas, Matías Alonso and José María Espejo-Saavedra. In that list for Barcelona, ​​Ines Arrimadas was number four. The group was joined shortly after by Fernando de Páramo and Fran Hervías.

When in 2015 most of them left Catalonia behind Rivera to make the leap to Madrid, Carrizosa remained there with Arrimadas as spokesman for the parliamentary group, and he disciplined himself that he was not the one chosen to take his place.

With her lived the victory of December 2017, a bittersweet triumph that did not allow the party to govern or unseat the independence movement of the Generalitat. After Arrimadas’ march to Madrid in 2019, Carrizosa was appointed president of the parliamentary group and ‘inherited’ his office in the Parliament while Lorena Roldán became head of the opposition and candidate for the Generalitat. They were orders from Rivera. Carrizosa then did not want to compete for the position either.

Although his relations with Roldán are not bad, within the party some highlight the underground struggle that for months he had with his partner in the ranks to monopolize the leading role before the media or in debates in the Chamber. Without public rudeness: the new candidate for the Generalitat has a reputation for being a leader with a dialoguing spirit and little given to internal confrontations. As Secretary of Organization of the party in Catalonia, he was in charge of announcing his victory and congratulating her when, as expected, the senator won the primaries. “Respect Lorena. The genius reserves it for the debates with the nationalists and the republicans ”, point out those who know him.

One of the episodes that certify This dialogue and peacemaking spirit is the intervention that he starred in the harshest General Council that Ciudadanos has held, in which at the end of 2019 -after the debacle harvested in the elections of 10N- the manager that was going to pilot the transition until the celebration of the VI Extraordinary General Assembly in which the Rivera era would be buried was appointed. Carrizosa calmed the spirits between the sectors then confronted: the critic, led by Francisco Igea, and the official, who was represented in that tense meeting by Manuel García Bofill, president of the highest body between Assemblies. He asked both parties for “unity” to face the new and difficult stage that the match was about to begin. “We are not going to open the channel because the media are willing to take us by the guts to hurt us,” he warned them. “We are the ones who are united, and the Romans are out there,” he settled.

With the baggage and experience accumulated indoors, its mission will now be to bring together in a unitary list the parties that Ciudadanos calls “constitutionalists” -PP and PSC- in which Ciudadanos wants independent members and members of “civil society” to join. “so that no constitutional vote goes to waste.” To do this, he is willing, if necessary, to go back to the background again and let this hypothetical coalition be led by a “consensus” candidate from outside his party.

The statement made public this Wednesday by Ciudadanos to announce the decision of the Standing Committee explained that the maneuver of change has been made precisely to facilitate that this candidacy is led by “a public position in Catalonia so that it cannot be identified as a candidate for acronyms and blur any idea of ​​partisanship, thus facilitating the future constitutional coalition. Miquel Iceta’s PSC, from the outset, has already rejected the idea. And the autonomous PP, now led by Alejandro Fernández, is not enthusiastic about the formula either, but they prefer Carrizosa as an interlocutor than Roldán, who they do not forgive when he came to demonstrate in his day, before entering Ciudadanos, in favor of independence of Catalunya.