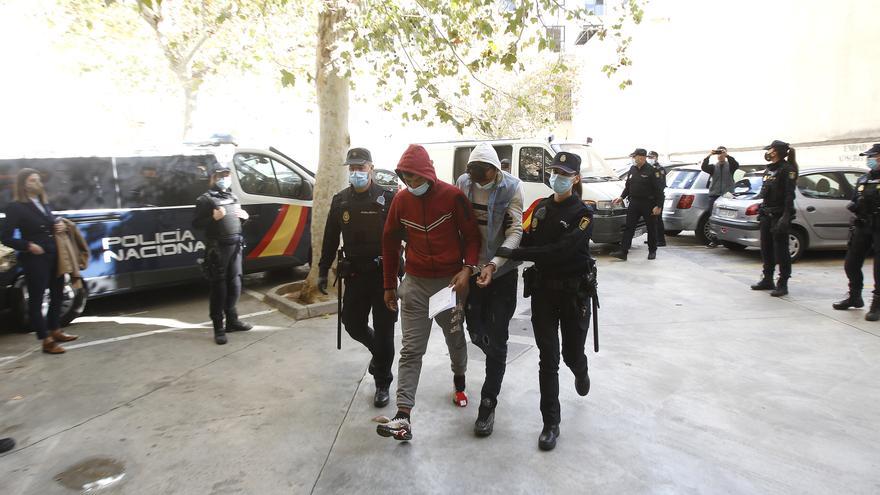 “Your financial and family situation [en Marruecos] It is very poor. “This is how the defense of several of the 12 passengers who were sent to prison last Monday without bail as a result of the forced landing occurred last Friday at the Palma airport for an alleged medical emergency, during which up to 25 Travelers jumped out of a plane covering the Casablanca-Istanbul route and, racing down the runways, fled.

By means of a letter to which elDiario.es has had access, the passengers’ lawyers demand their release from prison and the imposition of measures that are lighter than pre-trial detention and assert the need to apply the putative state of necessity to those investigated, an exculpatory circumstance. infrequent in the Spanish courts that lies in recognizing that the conduct of those investigated would be justified if it was to escape from a worse situation – in this case, the dire circumstances in which they would find themselves in Morocco – provided that it is shown that, Before committing the crime, they tried to act by lawful means to put an end to their situation.

In this case, the defense thus considers it justifiable that the passengers chose to escape from the aircraft and enter Spain irregularly with the aim of leaving the hardship conditions in which they would find themselves immersed in Morocco, where they would not have been able to leave in any other way. of their dire financial circumstances.

“The socio-political context for Moroccan youth today is one of serious conflict. Unemployment is widespread and the high level of insecurity in which their country, Morocco, is immersed, has caused unprecedented migratory waves during the last two years, The majority of young people and children. (…) The objective of these thousands of displaced persons, which occurs periodically, is to flee from poverty or armed conflicts due to the climate of intensification of hostilities between the Polisario Front and Morocco or persecution , yearning to obtain refugee status. All this leads young Moroccans to harbor the desire and need to flee to another place, to Europe, in search of a better future “, underlines in her letter one of the lawyers who attend jailed migrants.

This is the first time, since the fled passengers were arrested and brought to justice, that their defenses have manifested themselves on the circumstances that would have led them to escape from the plane, an event that led to the closure of the airport – one of the facilities that support the highest air traffic at a European level – and the paralysis of its activity for about four hours. Up to 12 flights to Ibiza and Menorca were diverted; eleven departure flights and eleven arrival flights canceled; all those who had as their departure or destination the Palma airport, delayed.

An event that, as the magistrate stated in one of the proceedings with which she decreed provisional imprisonment for the 12 detainees, was “provoked and organized” and entailed chaos “without precedent in European airspace and of international dimensions, echoing the press of the whole world of the events and putting into question the safety of air traffic “.

The defense of the 12 arrested asserts, however, that the desire to flee “from their third world condition by settling in a European country is legitimate.” And for this, he maintains, “they do not hesitate to risk their lives.” “The success rate of each illegal immigrant who achieves his goal is calculated at 1/1, that is, for every illegal immigrant who arrives in Spain, one has died on his journey.”

Circumstances that, justify the lawyers, cause that “the ingenious search for other less risky procedures, some of them peculiar and unique like the present one, is highly understandable”. Not in vain, they assert that “there are many non-governmental organizations that, in the face of inaction and lack of solutions on the part of governments, commit themselves and fight for the human rights of these ‘undocumented’ since, in the end, it seems that that is their greatest crime, not having papers to try a new life outside the borders in which they have had to live. “

“This being the case, it is not strange to find in our jurisprudence a treatment of the putative state of necessity,” continues the letter, which also mentions the crimes that are charged to the detainees, which they challenge and question. Thus, with respect to the crime of sedition contemplated in the Air Navigation Law of 1964, the defense indicates that the investigated conducts cannot be framed within this precept since the videos contributed to the cause “do not show violence beyond that of the own flight of the subjects “.

The letter affects the fact that this regulation came to light 14 years before the approval of the Spanish Constitution, from which it follows that it is a “pre-constitutional law that did not fully conform to the dictates” of the Charter. Magna. A circumstance that raises doubts for the defense regarding the possible unconstitutionality in the application of this crime to incarcerated migrants.

Similarly, the crime of sedition established in the Penal Code for public disorders does not consider applicable. In this case, it emphasizes that the facts under investigation have not directly damaged the exercise of the public function or, “at least, not more than any other crime of disobedience.” “Not being proven the alteration of the public peace can not speak of a crime of sedition, because otherwise it would also be classifiable as such the burning of containers or any act of vandalism within a demonstration.”

“In the investigated events we find ourselves before an open hostility directed exclusively to the flight of the plane. No hostility was directed to a different purpose, so that we can hardly find ourselves before a crime of sedition. The purpose of the young people accused here was none other than reach the national territory in an individualized manner, “the lawyer for those investigated stresses, who emphasizes that at no time has there been an attempt to” attack the integrity of the State or the norms that govern it in general “or” hinder the normal functioning of the democratic State “.

And he even equates his situation with that of the procés in Catalonia: “In the Catalan conflict the attack on the Constitution could be had as an end. In the present case, the attack has been aimed exclusively at the personal application of the regulations of Aliens. The difference is clear and obvious. The opposite would be to consider the immigrant foreigner as a generalized mass, that of illegal emigrants, without having the slightest consideration for the individual, subject of fundamental rights, who is always behind “.

Regarding the alleged prior agreement to force the landing through a Facebook group called Brooklyn, the defense rules out that the profiles published on this page correspond to any of those investigated. “What is evident is that it is a group that enjoys popularity among the youth of this country for its will to solidarity and for its desire to improve the living conditions of its fellow citizens. Having so many followers, it is possible that it will launch ideas or objectives, proposals, which will surely be followed by these thousands of young people, which does not necessarily mean that they will be carried out “.

“Directly implicating 12 people from among the thousands of followers that the group had as ideologues of a preconceived operation is something that in the current state of the investigation can only be a mere assumption,” the writing abounds. and it emphasizes that the messages published in it are not attributable to any of the defendants. “The plan agrees, but there is no evidence that they are the same. The picaresque, when life is at stake, expands. The same plan could be devised, even spontaneously.” Regarding the crime of favoring illegal immigration, it also emphasizes that “whoever is immigrating illegally, even when doing so in concert with other people, cannot be the author of such an offense.”

The defense even speaks of the possible “hot return” of two of the escaped passengers, whom the security forces took the plane back to return to Casablanca – the aircraft did not continue on its initially planned course towards Istanbul. Likewise, it alludes to the fact that the closing time of the airport is not detailed in the summary, carried out more than two hours after the landing of the plane and the subsequent evacuation of the passenger who suffered the alleged diabetic coma.

“The absence of time references, both by the investigators and by the aeronautical operators, of the exact moment in which the aircraft evasion took place reflects an unreal appearance of immediate flight. The truth is that the passengers who invaded the tracks did it more than two hours after Mr. YJ was evacuated to the hospital, because otherwise the closure of the airport after almost three hours later makes no sense, “he concludes.

The passenger’s lawyer thus requests that measures less burdensome than preventive detention be applied to the investigated, such as the imposition of a bond, the periodic presentation, the location or the prohibition of leaving the national territory, and sentence that the risk of flight “For those who intend to stay in the country, it must be discarded, criminal repetition is impossible and the concealment of evidence, unthinkable.”