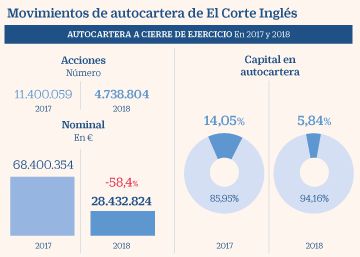 The English Court will file the main system of variable remuneration offered to its employees, beyond the sales commissions in store. This is the sale of own shares offered to employees from certain professional categories.

Titles that could later be returned to the company when leaving the company, thus obtaining a return on these titles. This system, which has been in force for decades, has become obsolete in the face of other forms of long-term internal compensation, which has led the distribution group to design a new model, as published by El Confidencial.

As this newspaper has learned, this new plan will be put to the vote and approved in the board of directors that the company will hold this month or, at the latest, in March. This will consist of a savings fund that will offer a minimum return of 1.5%, plus an extra that will be linked to the operating performance of the group. The transition will be complex, since there are currently 2,000 employees of El Corte Inglés with company titles, representing just under 3% of the capital.

According to sources familiar with the situation, the company plans to offer them to exchange their securities for participations in this new guaranteed fund, although they may hold a maximum of 10,000 euros in shares of El Corte Inglés. The workers of the distribution group from the salary category of “interested”, the equivalent of a plant manager, were those who could access the purchase of shares of the company.

These come from its treasury stock, and the movements that are made at the end of the year with these titles are reflected annually in the individual accounts of El Corte Inglés. Too in 2018, recently published in the Mercantile Registry.

In them both acquisitions and sales appear [ver cuadro]. A total of 12, made between July 2018 and February 28, 2019, date on which it ended. Of these, six were for sale and another six for purchase, and according to the information reflected by the company, there are up to six different prices, which in turn gives six different valuations of 100% of the company.

Among these operations, which are also the most significant, are those carried out with the Qatari investor Al Thani, owner of 10.33% of the capital of El Corte Inglés through the Luxembourg company Primefin.

On August 1 of that year, the 2.27% that Al Thani refused to take from the group is reflected as a purchase by El Corte Inglés, which he could have done as payment of the interest on the loan. Finally, he preferred to receive these in cash. Four months later, on November 16, the transfer of another 0.33% of the capital of the distribution group for a value of 33.4 million appears. That percentage is what Primefin added to its 10% for the breach of certain business objectives, as advanced Five days in August of that year.

The rest of the transactions that reflect the balance of El Corte Inglés are less important, and these are those corresponding to the sale of shares by employees. The prices set for sales, that is, the shares delivered to the workforce, were around 60 euros, while the purchases, the price paid by the English Court to recover the titles and that make up the compensation that the worker ends up pocketing, was in the environment of 75 euros, a price that values ​​100% of the company at just over 6.1 billion euros. In some cases there are differences in cents, since the price setting depended, among other factors, on the year in which the titles were awarded.

Two operations with higher prices are also reviewed, around 85 euros, which would correspond to private agreements with non-employed shareholders.