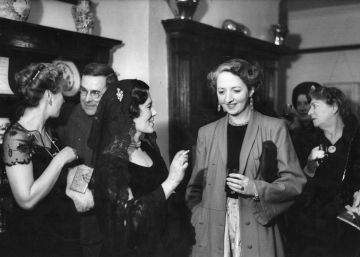 Every literary work is an individual and at the same time collective story, a portrait of a time and a place that not only clothe the characters with a context, but also define why their particularity should interest us. So is The great fortune, the first installment of Olivia Manning's Balkan Trilogy, an alternative history as ambitious as it is unique to the Second World War, a British look far away from the heroism of the troops or Churchill's speeches, that of a group of young English people to whom the start of the war plunges in Romania.

"We are trapped on the bad side of Europe," says Clarence, the losing friend who always accompanies the protagonist in the eternal absence of her husband. That phrase is set in the summer of 1940, after the fall of Paris on the swastika-infected side of the map that everyone sees in a German shop window in Bucharest. And it is the phrase that propels us like a tensioned bow until we are in today's England. We explain ourselves.

This journey through the problems of Europe through five books recently published in Spain - one of the summer series in Babelia, of which this is the fourth installment - has led us to rejection of the immigrant at the hands of the Italian Melania Mazzucco, to the care and relationships that really matter hand in hand with the Basque Eider Rodríguez and to the oppression of the decisions of others (military, religious, or civil) from the hand of the Polish Olga Tokarczuk, Nobel Prize for Literature. For this British chapter we could have chosen any of the books that this year have dealt with Brexit (Jonathan Coe was masterful in The heart of England, Anagram). But the journey that we propose today is further, in time and place.

The great fortune (Asteroid Books) fixes its feet on that 1939 Romania that still looked at the West with admiration, envy, with the desire to imitate England and France and with the hope of being part of a band of allies defending themselves against Hitler. There are the pro-Russians, who see in socialism an illusion of justice, and there are the pro-Germans, an Iron Guard that agitates, that assassinates, that prepares the fifth column for a German invasion that, in the environment of the protagonists, nobody wants to see . "They already have too much food on their plate," says one of them, fearing a Russian presence. The Germans will never be able to beat us, say the Romanians confident of their defense capabilities. The hyper-confidence that nothing is going to happen, the deceptive sense of immunity, the inability to raise the focus and see beyond the dinners and parties that bring them together every night as Europe breaks down is a constant, a vertigo for the reader who You already know the fatal outcome and a lesson notice that we seem not to have learned today either: individual self-absorption does not exempt us from collective disaster.

Cross hatreds also grow in The great fortune: Jews and non-Jewish Romanians, Nazis and communists, bourgeois and peasants look at each other, distrust, hate each other and live with enough rules to survive in the best of cases and insufficient ones to leave everyone lurking one another, jumping against the beggar, the refugee, the gypsy or anyone who threatens the few certainties of each one. As you can see, more lessons for today.

The book is of enormous narrative beauty, well preserved in Eduardo Jordá's translation, and contains a precise anatomy of unsatisfied couple relationships, of social gatherings in which they debate about drinking or who pays the bill, about who it is. spy, correspondent or insider instead of taking on the big German and Russian move. Manning (Portsmouth, 1908, London, 1980) subjects us to the cold, the snow or makes us enjoy the powerful thaw or the smell of spring while taking us to the cinema to follow the war news that is only seen there, who he cares about the movie. In full decomposition, first the French newscasts disappeared, then the English and, when the Germans arrived, the Romanians found scenes of heroic advances never seen before, with tanks that left behind their anachronistic vision of wars on horseback and with very handsome Germans who women began to celebrate. This is life.

At the final party before the rout, a Romanian enters the apartment where it is celebrated: “What are you doing here, English? You have lost the war, you have lost the empire, you have lost everything, but you dedicate yourself to making noise and do not let anyone sleep as if you were still a powerful country ”.

The cry of that Romanian woman, the drawn bow of this autobiographical novel written in 1960 leaves us the arrow at our feet in this era of Brexit and uncertainty to point out where isolation leads in a bubble of your own party while the world dies . At that time, the British assumed their leadership and after retreating from Dunkirk they managed to resist, fight and win, although not enough to save Romania or the East. The world, or half the world, mattered to them. Today, the Brexit parties and self-absorption continue and it is impossible to imagine a recovery of leadership like the one that then made them take Hitler by the lapels and give him what he deserves. On the contrary, they seem to cry out again, like Clarence in 1940: "We are caught on the bad side." Not just from Europe, but from history.

Literature, as always, tells us everything. And Olivia Manning - who collects mentions of Antony Beevor, Anthony Burgess in favor - knew how to live in her own flesh and tell us what happens when self-absorption overcomes.