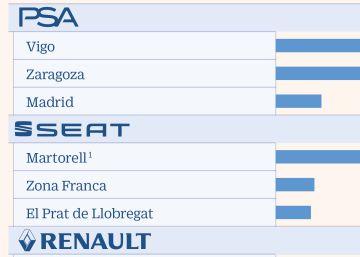 The Covid-19 has turned the automotive sector around and is facing one of the biggest challenges, if not the oldest, of all its history. Car manufacturers managed to overcome the 2008 economic crisis with great effort, but the pandemic has caused something that until now had not been experienced, such as the temporary closure of plants and dealers worldwide.

In this context, and with a 2020 than it already started loaded with uncertainty for the sector before the pandemic broke out Due to a general drop in demand and the entry into force of strict emissions regulations in Europe, it seems that the worst is yet to come.

The voice of alarm in Spain jumped last Thursday after ensuring the Japanese newspaper Nikkei that Nissan is planning to dismantle its Barcelona Free Trade Zone plant, which has been operating below 30% of its production capacity for a long time and which seems to no longer be profitable to maintain, leaving more than 3,000 direct and 20,000 indirect jobs at risk.

The Japanese company is preparing a restructuring plan to save 2,600 million euros a year in fixed costs and everything points to the Catalan factory being part of it, despite the fact that the Japanese firm promised to invest 70 million euros in building a new painting plant.

For his part, the company ensures that everything is “conjectures” and that it will report its short and medium term strategy on May 28, taking advantage of the presentation of results corresponding to the 2019/2020 fiscal year.

Many are holding on to the Luca de Meo’s arrival at Renault. The affection that the manager has for Barcelona after his time at Seat is well known and this could put pressure on the franconipona alliance along with José Vicente de los Mozos, vice president of manufacturing and logistics of the French group and president of Renault Spain and the employers Anfac.

Car manufacturers maintain a highly relocated production network in their countries of origin and the coronavirus has raised the debate on repatriation. It seems unlikely that motor companies will start to leave certain countries to concentrate their manufacturing in one place, both due to lack of capacity and logistical problems. However, countries like France have already said that they will make state aid contingent upon the return to the country of productive activity.

In Spain, Renault and PSA operate and between them there are 23,600 employees, only counting those who are directly linked to production area. The Financial Times reported last Friday that the rhombus firm is considering moving the manufacture of the Captur and Kadjar models, which are assembled in Valladolid and Palencia, respectively, to the United Kingdom. De los Mozos himself announced last summer a fourth Renault industrial plan for Spain, where he invoices some 10,500 million euros a year.

Ford Europe announced at the beginning of the year an investment of 42 million euros in Almussafes for the production, since 2021, of the plug-in and hybrid versions of the Kuga and Mondeo models, as well as the electric variants of the S-Max and the Galaxy.

However, since the US firm announced its cost reduction plan in Europe to strengthen its position and return to profitability, the uncertainty weighs on the Valencian plant, with almost 7,000 employees.

In 2019, you received the bad news that you will stop manufacturing 2.0 and 2.3-liter Ecoboost engines. The new generation of these will be produced in North America from 2022. At the moment, the company has not proposed any alternative to fill this gap. And now it is negotiating an extinction ERE for 350 people due to a drop in production that it presented before the health crisis erupted.

Are almost 60,000 jobs that directly depend on vehicle production plants in Spain.

Strategic plan. The employers Anfac (manufacturers), Faconauto (dealers), Ganvam (distribution) and Sernauto (suppliers) will meet again today with the Minister of Industry, Commerce and Tourism, Reyes Maroto, to continue spinning the plan to boost demand that it needs the sector. The meeting, scheduled for today, has been postponed without a date, as confirmed by Cinco Días sources in the sector. The employers claim 400 million euros to relaunch sales and the Government has assured that it will launch stimulus measures in the short and medium term, although without detailing when or how.

Drop in production. Spanish vehicle production will drop around 25% this year compared to 2019 due to the impact of the coronavirus. According to Anfac estimates, some 700,000 cars will be lost in total compared to last year, when 2.82 million units were assembled. These figures place the situation in the same manufacturing environment of the “worst years” of the economic crisis.

10% of GDP. The engine accounts for 10% of Spain’s GDP and 9% of employment. The employers defend that the way out of the crisis is not possible without the recovery of the automotive industry and for this reason they urge the implementation of exceptional measures.