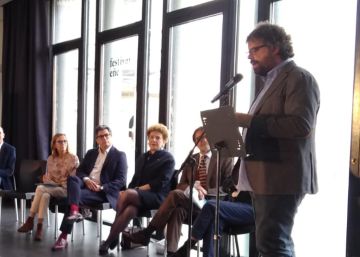 Literature is increasingly hybrid in its genres, in the same book the authors mix fiction, reality, autobiography, essay … Moving the shelves that are no longer waterproof to bookstores to meet with readers is the goal of the next Eñe Festival, which is celebrated from November 11 to 23 in Madrid and Malaga, and has for the first time a guest country, Mexico. Following this line, the literary director of the XI edition, the writer Sergio del MolinoHe stressed on Tuesday, in the presentation of the festival in the Circle of Fine Arts, that "literature must open windows", so it has designed a program "of debates, in which the public participates and readers talk, not a succession of academic conferences. " With the participation of 135 authors in 92 activities, carried out in 22 locations, Del Molino's proposal, entitled Border, is to give voice "to narrators of all kinds who move on the frontier of fiction and the real".

Eñe week begins at the Casa de América, in Madrid, on Monday, November 11, with a debate, moderated by Del Molino, in which Peruvian authors Santiago Roncagliolo and Joseph Zárate and Mexican Elda Cantú will discuss the line that separates fiction and chronicle. On the 14th, the Cervantes Institute will host a meeting on journalism with Rubén Amón, Rosa Belmonte and Guillermo Altares, from EL PAÍS. At the same time, throughout that week, a dozen bookstores in Madrid will join the festival for the first time, with acts such as performance by the artist Isidoro Valcárcel Medina, book presentations, poetic recitals, readings and conferences.

As usual in this event, the bulk of the program will arrive on the weekend, this time on November 15 and 16, in the Circle with free access. It highlights a conversation between writers Elvira Lindo and Antonio Muñoz Molina, moderated by Del Molino. "I will try to talk about their interweaves, it is such a brilliant couple and at the same time with such dissimilar profiles," said the author of Empty Spain. Also on Friday, organized by EL PAÍS, they will talk about columnism Luz Sánchez-Mellado, Manuel Jabois and Leila Guerriero, presented by Jesús Ruiz Mantilla. On Saturday, Juan José Millás and Manuel Vilas star in another act of this newspaper, with Berna González Harbor, entitled The family, well, thanks, which will deal with conflicts with the closest beings and how to transfer these to books.

In a program of genres that intersect, Del Molino highlighted the participation of "stowaways". As the announcer Carlos Alsina, who will be interrogated by author Karina Sainz Borgo about the relationship between radio and literature. The thread that joins Juan Gómez Jurado, Rodrigo Cortés and Arturo González-Campos, who will speak with humor about "giving the tabarra as one of the fine arts" will also be radio. The proposal of Navarrese writer Hasier Arretxea will be to declare at the same time that his father, Patxi, aizkolari, will cut a log. A very different tone will be the meeting between Martín Caparrós, Edurne Portela and Carlos Velázquez, on violence and literature.

Luis Posada, director of the Eñe Festival, influenced the participation of Mexican authors such as Fernanda Melchor, Luis Jorge Boone, Elda Cantú or Julián Hebert, among others, "to develop the idea of ​​borders" that this edition covers. The presence of the country with the most Spanish speakers in the world is completed by the Casa de México and the Instituto de México. Posada also recalled the appointment on Tuesday, November 19, at the National Library, on football as a matter of literary fiction, with Miguel Pardeza, Valentín Roma and Juan Tallón.

The end of the party in Madrid, in an edition that will reward Javier Cercas for his career, will arrive in a large space, the WiZink Center, on Thursday, November 21, which organizers hope to fill with books and literature. It will be with a face to face between the poet Elvira Sastre and the singer-songwriter Andrés Suárez, between verse and music. The Eñe Festival will have its continuation in Malaga, venue that repeats for the second time, on Friday 22 and Saturday 23 November. The epilogue will be again in Madrid, from December 21 to 30, at the Casa del Lector, with the literary proposal Macondo, a set of oral narration activities for all audiences.