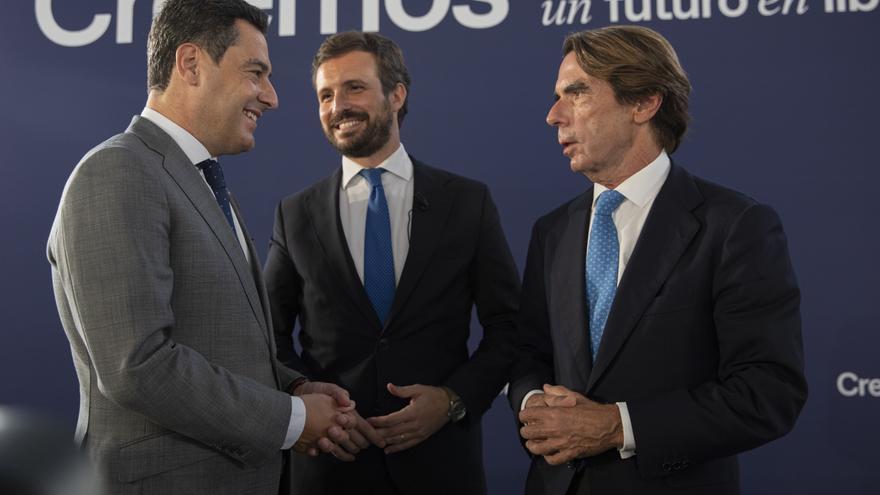 
Pablo Casado promised them very happy at the start of the national convention of the PP, which ends this weekend in Valencia. I had held on, and cattle, to Isabel Díaz Ayuso in the first serious internal pulse since it was made in 2018 with the leadership of the party. The president had several days of continuous media attention ahead of him, on a marathon and expensive tour of the Spain governed by its barons: from Galicia to Murcia, passing through Castilla y León, Madrid or Andalusia. But the passing of the conference, more characterized by the interventions and controversies of the star guests than by himself or the programmatic content of the talks, have diluted the main objective of the convention: to offer an image of personal and ideological relaunch, to relocate the mark PP in the political center and open the party to the center-left before the next electoral cycle.

The openness of the PP towards the left of society –or the lack of receptivity of society to be included in an ideological convention of the PP– it was a fiasco since the presentation of the event. Casado could not convince figures from that spectrum to attend any of the many discussion tables that have been held in the five-day traveling convention. His intention was to make an event “to the American”, in which the protagonism of the party remained only for the final stretch. But nothing is further from reality: neither associations of judges, to which he was invited, nor too much civil society, all the names that have paraded through the convention are ideologically or structurally related to the PP. The regional presidents (all, except Ayuso, self-excluded until this Saturday), mayors and deputies. From ex-militants (such as Alejo Vidal Quadras or Juan Carlos Girauta), to collaborators of related foundations, such as José María Fidalgo in Faes, through international leaders of the same political family or connected with the network of relationships woven by José María Aznar to one and other side of the Atlantic.

The PP modifies the program of its national convention: García Egea will speak alone and just before Ayuso


The Popular Party has modified the program for the penultimate day of the National Convention, that is celebrated this Saturday in Valencia, so that the secretary general, Teodoro García Egea, intervenes just before the president of Madrid, Isabel Díaz Ayuso, does.

The program distributed by the PP at the beginning of the Convention reserved for the ‘number two’ the inauguration of the day together with the president of New Generations, Bea Fanjul, and the president of the PP of the city, Vicente Mompó.

García Egea had no further interventions planned during the day. But finally he will deliver a speech at 12.00 with the title “Without a party, there is no Government.” At that time, Ayuso will already be in the City of Arts and Sciences of Valencia, which hosts this penultimate day of the convention. The president of Madrid will speak with the rest of the regional presidents at 1:00 p.m. at a table entitled “The Governments of Freedom.” According to the organization, their intervention in this panel will only last five minutes.

Ayuso has starred in the last weeks a hard fight with the state leadership of the party to advance the calendar of congresses approved by the National Board of Directors and take control of the PP of Madrid. A pulse that Pablo Casado has won, at least for now.

Ayuso has been absent from the entire convention and even skipped the event in Madrid, where Married received the endorsement of the party, Esperanza Aguirre included. García Egea addressed a phrase to her that showed that Genoa had no intention of yielding: “The PP in Madrid was destroyed by corruption.” Ayuso, who threatened not to appear even at the closing of the convention this Saturday and Sunday, finally cut his trip to the US and will arrive this morning. His expected intervention will now have another one of the ‘number two’ of the party that was not planned.