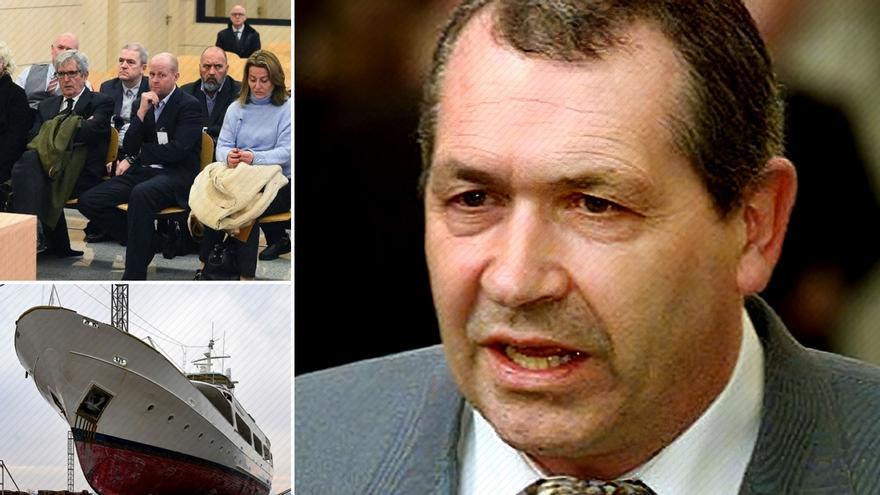 On 24 May 2015, the British Essex County Police found the bullet-stitched body of John ‘Goldfinger’ Palmer. Regarded as the richest criminal in UK history, Palmer was then awaiting trial in Spain for defrauding hundreds of people with bogus apartment rentals in the Canary Islands. More than two decades after the opening of the investigation, the Supreme Court has just handed down a final judgment against his nephew and the people who inherited its criminal structure and has confirmed sentences of up to 20 months in prison, in addition to the obligation to compensate 149 victim families with a total of 1.3 million euros.

John Palmer, whose murder has not yet been clarified six years later, disembarked in the canaries in the eighties with its business structure. A structure that he used between 1993 and 1999 to sell vacation weeks in his tourist complexes: Hotel Flamingo, Island Village or complexes such as Tenerife Royal Gardens, Lagos de Fañabé or Los Olivos. They were all in the Canary Islands and the sale was managed under the timeshare: several owners put the money and each one used it in a certain week so as not to overlap with other families.

The victims – the vast majority British – put in thousands of euros. They also became part of a “club” whose membership also cost them an annual fee. But they never got to enjoy their apartments in the Canary Islands despite spending, together, more than one million euros. The promoters “gave them excuses” when their apartment was not available and offered changes in exchange for more money. Sometimes families found out that they had paid for a vacation at a hotel that had not yet been built.

On many occasions, they ran out of vacations and the money never came back. By the time they realized the deception, their thousands of euros were already in offshore bank accounts on the British Isle of Man. The loot of the scammers led by Goldfinger returned to Spain through a washing machine of 18 companies linked to the criminal group after passing sometimes through Switzerland or the Isle of Jersey.

The holiday scam in the Canary Islands started with John Edward ‘Goldfinger’ Palmer at the helm and continued to function at full capacity when he entered prison in 2001, sentenced to 8 years in prison for precisely defrauding thousands of tourists – most of them elderly – who had fallen for their Canary Islands timeshare scam, as reported the BBC. His nephew took over the business on the islands along with five other people.

The investigation began in the National Court in 2000 and the Supreme Court has issued a final judgment 21 years after the opening of proceedings 176/00 of court number 5. The judges confirm a sentence of 2 years and 8 months in prison for Palmer’s nephew and 20 months in prison four more people who operated the fraudulent companies. The sentences include fines that in some cases exceed 12,000 euros and the obligation to return the money to their victims. One of those initially convicted is acquitted for lack of evidence.

The magistrates of the criminal chamber, with Javier Hernández as rapporteur, have studied and rejected the resources of Palmer’s nephew – whose sentence is higher because the Police found a gun in his home -, that of his lieutenant and that of a Dutch woman who managed several companies that were used to perpetrate the scam. The ringleader of the scam was assassinated in 2015 and therefore never got to sit on the bench. One of those initially convicted is acquitted because he worked in some of the companies and participated in some sales but without knowing that he was perpetrating a scam. This means that only Palmer’s nephew will have to go to prison to serve his sentence.

This scam is one of the oldest that the National Court has instructed and one that has been in the kitchens of the courts for the longest time until it has a final judgment. The original investigation proceedings were opened in 2000 by Court 5 of the National High Court when it was headed by Judge Baltasar Garzón. A complex investigation process that went through the hands of the current Minister Fernando Grande-Marlaska, Judge Pablo Ruz and Judge José de la Mata.

The trial was held in january 2019 but by then the main defendant had been dead for four years. His nephew became the new ringleader and now the Supreme Court rejects his allegations, in an appeal in which he came to say that he was “a mere front man” of his uncle John. Something that the judges of the chamber presided over by Manuel Marchena flatly rule out: “He co-decided the plan, he co-executed it and, in addition, he co-managed the illicit enrichment result in the exhaustion phase.”

According to the proven facts of the sentence, the victims “could not enjoy the vacation weeks in the contracted apartments because they were not available in the contracted weeks, they gave them excusesThey were offered a change of weeks for more money, without them being able to enjoy the weeks contracted or the weeks offered in exchange, despite which they continued to pay maintenance costs for fear of losing everything invested “.

The judges estimate, yes, the appeal of one of those convicted of fraud and illicit association. A British citizen who worked for the group’s companies and who sold the “Dream Work Vacation Club” right and left, one of the different forms the scam took and which included paying annual fees for belonging to the multi-owner “club” for half century. He was selling it but didn’t know it was all part of a scam. The Supreme Court says that “unlike other defendants, no managerial, negotiating or decisional intervention is described by the appellant today in the execution of fraudulent operations.”

John Edward Palmer was no stranger when the National Court blew up the operation for this macro-scam almost two decades ago. By then he was considered the richest criminal in the United Kingdom, had been convicted of fraud and had been linked to what the British press defined as the “centenary crime”: the theft in November 1983 of 26 million pounds in almost 7,000 gold bars, diamonds and cash from one of the Brink-Mat security company at London Heathrow Airport.

Three thieves were sentenced in the 1980s to up to 25 years in prison. Palmer, whose fortune was at one time estimated at £ 300 million, was charged with smelting some of the gold from the heist in a foundry at his own home in Lansdown, Bath. He sat on the bench but was acquitted in 1987 although the nickname ‘Goldfinger’ accompanied him to the grave. The “gangster”, as the British press defines him, was a jeweler in that area of ​​the United Kingdom and did not go to jail until 2001 for defrauding thousands of tourists when he was already residing in the Canary Islands.

His name returned to the headlines when, out of jail, he was killed by six shots at his Essex home. Six years later, the British police have not managed to find a murderer, according to police investigators whose statements were collected last year by the BBC. They are convinced it was a contract murder and that the killer watched him for days through a hole in his garden fence. His widow, Marine Palmer, even wrote a book three years ago now: ‘Goldfinger and I’.

John ‘Goldfinger’ Palmer’s trail of opulence and crime lives on in our country. His yacht ‘Brave Goose’ (brave goose) has been stranded for years on the Galician coast and currently on the Coruña dock of the Oza dock. A boat from 1972 with 35 meters in length that has tried to be sold without success and that continues, to this day, in Galician waters waiting for its future. From the company Zarpas Catamaranes, which began to listen to offers at the beginning of this year, they explain to elDiario.es that the sale “was legally complicated” and the boat “had to be withdrawn” from the market.