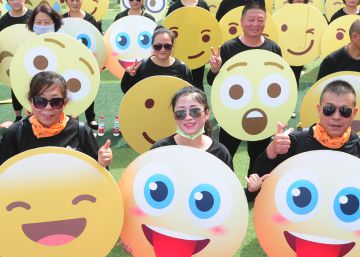 The emoticons and emoji they have achieved the word distinction of 2019 that has granted for seven years the Urgent Spanish Foundation, promoted by the Efe Agency and BBVA. After choosing escrachand in 2013, selfi in 2014, refugee in 2015, populism in 2016, aporophobia in 2017 and microplastic in 2018, the Foundation team has chosen this time to highlight the role of these small symbols in communication .

As announced by the Foundation, "emoticons and emoji (and its evolutions: bitmojis, memojis, animojis ...) they are already part of our daily communication and conquer every day new spaces beyond private conversations in chats and messaging applications in which they began using them. "For the Fundéu, its impact on daily life is" undeniable "and their relationship with "with the rest of the elements that make up the communication, such as words, phrases, punctuation marks ..." That is why they have chosen emoticons and emojis as the word of the year. The designation has been made after several debates of the members of the Fundéu, philologists and journalists, and "a year of work with the language most related to the news," says the institution.

The emoticons They were born in the nineties, and in their beginnings they were just drawings that were created with spelling signs, such as 😉 In that century they have become emojis, drawn figures that contain a symbolic value and that help communication.

"It is not, of course, that emoticons and emojis come to steal words or pervert our language, which has shown for centuries its ability to adapt to the new times and technologies of each era. Nor that we end up expressing ourselves alone with these types of elements. We believe that they constitute one more element that contributes to achieving the ultimate goal of languages: communication between people, "says the Fundéu BBVA general coordinator, Javier Lascuráin. "In a world marked by speed, emoticons bring agility and conciseness. And in an environment where much of what we write, especially in chat rooms and instant messaging systems, is written oral communication, these elements give us they allow adding gestural and intentional nuances that would otherwise be lost, "he says. The president of the Fundéu BBVA, Mario Tascón, During his speech this year at the Congress of the Language Academies in Seville, he said: "Maybe the emojis are the closest to a universal language that humanity has ever created."

The Fundéu BBVA is a non-profit institution whose objective is to promote the good use of Spanish, especially in the media. To this end, it issues linguistic recommendations linked to informative news and answers hundreds of queries through the telephone, email, web and social networks.