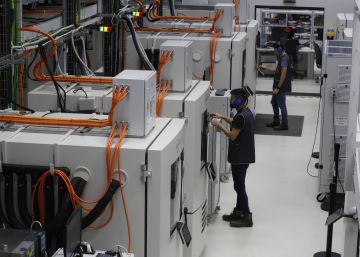 Ficosa, one of the Spanish referents of the auxiliary automobile industry, had a goal for 2023: take advantage of the pull of its alliance with Panasonic (owner of 69% of the company) and achieve a turnover of 1,750 million euros. It can't be. Little time has passed since that decision, but the board of directors has assumed that it will not reach that figure and that this objective will be significantly reduced.

Its CEO, Xavier Pujol, avoids revealing that figure for internal reasons, but explains the facts that have caused that correction in the forecasts for the future: “The automotive market fell 3.5% last year and this year will return to do between 5% and 6%. And in addition the brands have delayed some launches of electric cars and that has affected us, too. ” Again the economic slowdown is behind a growth review announcement, to which industry groups are adding a new factor that will be repeated in the next two years: the learning curve that vehicle manufacturers are suffering in their first massive batches of electric vehicles, thrown into rapid fire by the pressure of the regulations. "The transformation is being so brutal that we are all learning," says Pujol, who has no difficulty saying that "the crisis is a fact."

Ficosa is one of the few Spanish companies rated as TIER1
– top-tier suppliers in the supply chain – that accompany the major car brands in their new releases. Present in 16 countries, it has 24 production plants spread all over the world, with the aim of being close to the car brand plants and adjusting the supply of products.

The group had a turnover of around 1,200 million last year and had a profit of 20 million

Among the companies with which he works hand in hand is Volkswagen Group, whose subsidiary Audi convinced to replace the mirrors of a lifetime with external cameras in its electric model E-tron. It is the only car with another Honda (in that case with its own technology partner Panasonic), which has introduced that technology. And in summer he announced that BMW He has bought his interior mirror – which includes a payment unit to overcome tolls – a contract that will allow him an income of 45 million euros by ensuring the sale of 300,000 units from 2021.

But being at the forefront of new releases doesn't just mean good news. The last three years have been flat in growth. If in 2017 the company invoiced 1,208 million, last year that figure decreased slightly. And in 2019 a similar situation is expected. By 2020, the outlook could improve, once the introduction of a new wave of products that will consolidate its production stage is consolidated.

"It's difficult, because in the end we have to continue spending and investment," says the first executive, who extols the alliance with Panasonic for the musculature it offers to endure moments of disruption like that.

Schism and vision of the future

Panasonic entered Ficosa's shareholding in 2015, who was experiencing a complicated moment because of the differences between the two owner families: the Tarragó and the Pujol. The latter ended up staying in the company after the entry of the Japanese multinational. Both societies saw it clearly: electronic devices and cars of the future were going to cross the road. Panasonic now controls 69% of the shares, with no signs of changing the corporate structure. “Our relationship is good, committed and stable. We have the challenge of integrating Japanese culture in our company at the speed that the transformation that the automotive industry is going through needs, ”says Pujol.

The challenge is complicated. Ficosa became large in the automotive sector serving parts to manufacturers as mirrors, whose technological advance was based more on the design and integration of lights than anything else. That is the business unit that now contributes 60% of the turnover. But they assume that the paradigm will change in a short time and redirect their efforts to anticipate changes without canceling recurring income. The nearest future will be in cameras, sensors and screens that are becoming a raw material for the industry. They also anticipate the next step: that need that brands claim to have in response to mobility (e-mobility), with the services linked to it.

"Our position is complicated, because traditional business still represents 85% of turnover," says Xavier Pujol. “We dedicate 75% of the investment in research and development (R&D) to the digital business, which at the moment only offers us 15% of the income”.
That investment is equivalent to 8% of the income of a company that won 20 million euros last year. "Without the economies of scale that the Ficosa-Panasonic alliance allows, it would be very difficult to resist a market downturn like the current one in full peak investment," he says.

In any case, given the crisis situation in the automotive sector due to exogenous (deceleration, commercial battles, Brexit) and endogenous (technological transformation), Pujol breathes calmly because first-class suppliers, although they suffer The uncertainty does not directly suffer the main fear of manufacturers: that customers receive coldly the surge of new electric vehicles expected in the next two years, marked by a powerful investment in plant development and adaptation. "The truth is that all industries are acting, but not looking at the market, but looking at the volume of sales set by the regulations," he says. And warns that this assumption may represent in the sector the risk of creating a "bubble."

China can become the advance of that future. Car sales in the Asian giant could fall 8% this year and stand at 26 million units. In 2018 they already dropped 3%. "It is the first experience of fall that we have in that country and this year the setback will already be global," he warns.