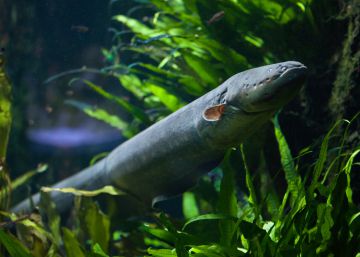 Electric eel Electrophorus voltai You can knock an animal the weight of a bull or a crocodile. Its defense mode is a discharge of up to 860 volts that runs through its entire body of two and a half meters, which is equivalent to putting your hand in four household outlets at once. This is described by a study of National Museum of Natural History of the Smithsonian Institute (Washington) published this Tuesday in Nature Biotechnology.

This animal, from the family Gymnotidae, It was divided into three species (electricus, voltai Y varii) that populate the waters of the Amazon to the Andes today. The first divergence occurred more than seven million years ago, at the end of the Miocene and during the Pliocene, when the world suffered divisions of the geological time scale, while the Pyrenees rose and ice formed in Antarctica.

Although the presence of electrocytes in the eel skull Electrophorus electricus sand knew 250 years ago, Researchers have shown that two stronger sister species now join it. One of them, the E. voltai, becomes the most powerful bioelectric living being on the planet. Its electrical discharge is four times greater than that of a torpedo line, which does not exceed 220 volts. Each of these aquatic snakes come together as a family in the same space depending on the properties of the water. The most powerful, very similar to what was already known, lives in well oxygenated rivers of clear waters with low conductivity that flow in rocky or sandy bottoms; the other, the E. varii, walk 300 meters below sea level in murky waters with muddy depths and high conductivity.

"These discharges can cause painful numbness and strong muscle contractions."

To understand the multiplication process, scientists have used 107 copies of these fish and analyzed the animal's skeleton. The study concludes that the three eels have different skulls, dentures and up to 6.5% difference in their DNA. This obvious distinction is due, according to a study hypothesis, to an ecological specialization of the species to face the geological changes of seven million years ago. On the other hand, each species emits a different discharge. Researchers have detected, thanks to the shape of the electric wave present in the body of the fish, that the E.voltai, as the name implies, are the most powerful with 860 volt discharges, followed by the E.varii with 572 and the E.electricus with 480. Carlos de Santana, one of the authors of the study, says that these animals do not pose a deadly threat to humans since the discharge does not exceed three seconds, but "that can cause a painful numbness and strong muscle contractions "precise.

The protagonists of scientific and historical advances

The author also recalls that these electric fish have advanced science. It was those eels that, in 1799, inspired Alessandro Volta to design the first constant current volt battery. The treatment of neurodegenerative diseases found in these aquatic animals a source of acetylcholinesterase (enzyme found in nerve tissues and red blood cells). These curious characteristics of eels also helped develop a hydrogel battery to feed medical implants. "The comparison of the genomes of the three species of electric eels will produce additional advances towards the origins, the underlying structures responsible for generation and birth of high-voltage electric shocks, "concludes the expert.

Meteorites that caused tsunamis on Mars

A fish can have the secret of eternal youth