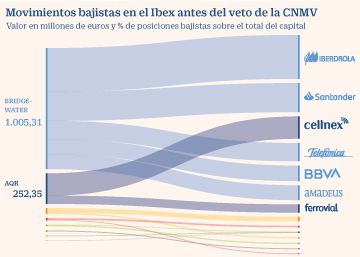 It had been more than 12 years – from the months after the bankruptcy of Lehman Brothers – that the Ibex had not lived such a fateful week. Between March 9 and 13, the Spanish selective fell by 11.7%, and on Thursday the 12th it suffered the worst session in its history, with a drop of 14.06%. At the time, eight of the largest hedge funds on the planet hovered over the Spanish stock market. They bet heavily on the falls in the Spanish stock market and made bearish bets against different values ​​of the Ibex for more than 1,300 million at the current price.

The downward pressure was such that it forced the CNMV to act. On Friday the 13th, it prohibited the creation of new short positions on 69 listed for 24 hours. On Tuesday it extended the veto to the entire Stock Market and extended it for a month. Esma – the European coordinator of market supervisors – also decided to lower the minimum threshold to 0.1% so that a fund is obliged to make public a bearish bet on a listed company.

In essence, bearish investors are those who make money when the Stock Market falls. They borrow shares of a company, sell them, and then, when they have fallen, buy them back. This is how they pocket the difference. Its advocates claim that they bring liquidity to the market. Their detractors accuse them of being mere speculators. And that, in times of turbulence in the Stock Exchanges, they only aggravate the falls and cause instability.

The largest hedge fund on the planet, Bridgewater, has sharpened its claws on the Ibex the most. He landed in the middle of a stock market storm in five of the most important stocks on the Ibex: Iberdrola, Santander, BBVA, Telefónica and Amadeus. An amendment to the entire evolution of the Spanish Stock Market in the coming weeks, from which only Inditex has been left out among the greats.

The hedge fund piloted by the controversial Ray Dalio had already made a similar move against the Spanish Stock Market in 2017. And now he bet again against it. He borrowed up to 0.89% of each of these securities. However, the CNMV’s measures and the government’s shielding of the taking of companies by foreign investors managed to reduce the Bridgewater attack. Last week it decided to collect profits and reduce its position on these values ​​to 0.69%. Even so, the bet is worth around 1,000 million against these five values.

It is followed by other major Wall Street speculators. AQR, founded by former Goldman Sachs executives. In his case, his strategy focused on targeting two specific values. One is Cellnex, from whom he expects a correction after having been the best value of the Ibex in 2019. The other is Ferrovial, where he has made a more modest bet (see chart).

The bearish attack on the Ibex was complemented by other old acquaintances from the Spanish stock market. Funds that usually emerge when the market smells blood in a specific company. This is the example of Citadel, which last year tried to extract oil from the collapse in the Bolsa de Dia. Or Marshall Wace, who attacked Popular a few weeks before its resolution.