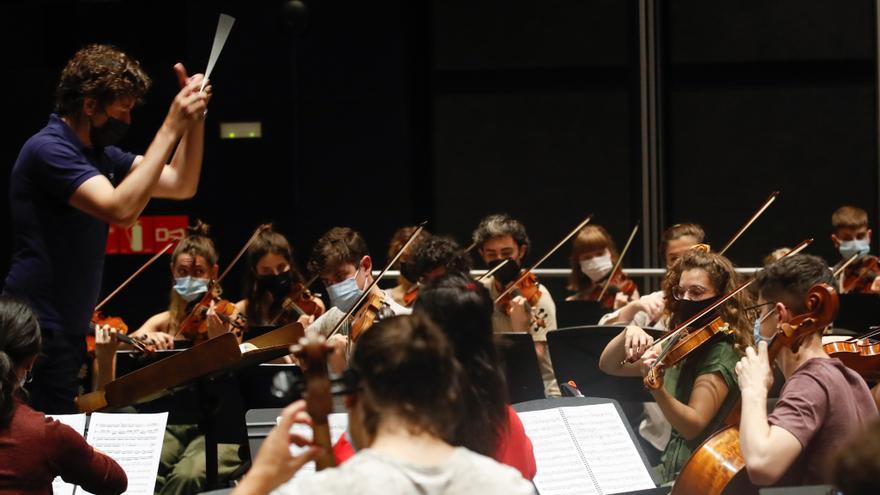 San Sebastián, Aug 6 (EFE) .- The Euskal Herriko Gazte Orkestra (EGO) makes its debut this Sunday on the stage where the San Sebastián Musical Fortnight receives the great orchestras, that of the Kursaal auditorium, and under the orders of Gustavo Gimeno, principal conductor of the Luxembourg Philharmonic.

After the opening concerts on August 1 and 2, musicians from the Luxembourg orchestra have mentored the EGO in preparing their appointment with the audience of the Fortnight, in which the Lithuanian violinist and conductor Julian Rachlin will also participate. he has also joined the trials.

The youth group, made up each year by the most outstanding young Basque instrumentalists and directed since 2020 by Rubén Gimeno, Gustavo Gimeno’s brother, has chosen for its debut in this cycle of the Fortnight two very popular works of romanticism: Symphony number 4 of Tchaikovsky and Mendelssohn’s Violin Concerto, the latter with Rachlin as soloist.

This performance, which “marks a milestone” in the EGO’s trajectory, according to the Fortnight in a statement, will be the culmination of the work that the orchestra has been developing since Wednesday and arises from its collaboration with the festival.

The aim is to give these young musicians “the opportunity to prepare their concerts together with established and internationally renowned musicians”, as well as “members of orchestras of international prestige”.

For this reason, several soloists of the Luxembourg Philharmonic have acted as teachers for the members of the EGO these days. “In this way, the objective of the Musical Fortnight is fulfilled that the musicians of the great international orchestras that visit the festival leave their mark on our territory, beyond the concerts”, the festival highlights.

The Euskal Herriko Gazte Orkestra was created in 1997 by the Department of Culture of the Basque Government “to provide a channel for orchestral musical training to the country’s young instrumentalists”.

On the other hand, the Orfeón Donostiarra has recalled that it has a double appointment with the public in this 82nd edition of the Fortnight, the first of them this Saturday in the church of San Vicente within the Organ Cycle, in which it will accompany the organist Gerardo Rifon.

The second concert will take place on August 21 in the Kursaal auditorium together with the Euskadiko Orkestra and under the baton of Pedro Pablo Pérez.