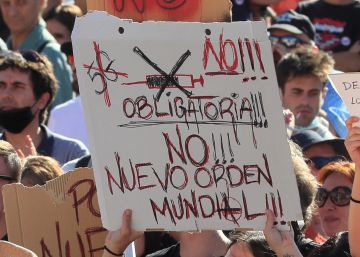 It caused a fire in social networks for days. When on June 9, the singer Miguel Bosé, with 30 million albums sold behind him, got on his Twitter account to explain in a long thread what his opinion is about the situation that Spain and the world are experiencing. cause of the coronavirus, he most likely knew it would generate at least some controversy. I do not care. Tweet after tweet, the artist was joining the dots that connect, in his opinion, the President of the Government, Pedro Sánchez, with a dark plan hatched by billionaire Bill Gates. Taking advantage of the health emergency situation, the latter would implant a microchip in the entire population through the vaccine that, with the help of 5G technology, would serve to control the minds of the whole world.

But the question did not stop there. Last weekend, Bosé himself, accompanied, among others, by the artist Ouka Leele, called for Madrid to demonstrate against the mandatory use of masks in Spain, a measure recently implemented by the autonomous communities in the face of the outbreaks that are are already giving in the country and recommended by the health authorities to avoid the spread of a virus that the lives of more than 28,500 people have been claimed nationwide and at least 343,000 have been transmitted.

Miguel Bosé is by no means the only public figure who has become a speaker for alternative versions of the official story. Since the 2000s, actors like Tom Cruise or John Travolta have become some of the most important ambassadors of Scientology, a movement considered a sect in some countries and a religion in others that posits that people are spiritual and immortal beings who must remember what they have done wrong in other lives to get rid of bad energies.

There is no shortage of examples from other areas. Three years ago, NBA player Kyrie Irving wondered if the Earth is really round and if it revolves around the Sun. Shaquille O’Neal, a former player also in the best basketball league in the world, came out a month later to support Irving and questioning theories about the sphericity of the Earth that date at least several centuries before Christ: “I constantly drive from Florida to California and the Earth, for me, is flat. I’m going in a straight line, I’m not going up or down ”.

They all have in common, experts say, a strong personality and great egos that lead them to think that, where others are deceived, they are capable of reaching the truth. “The psychological profile of these people responds to a certain narcissism. Many times, they come up with alternative political and religious theories just for the pleasure of seeing their followers support them unconditionally. Criticism does not scare them, it stimulates them, it allows them to confront and manipulate. Miguel Bosé knew what was going to happen when he posted those tweets ”, explains María Hurtado, psychologist at AGS Psicólogos. The psychologist Sabino Delgado, for his part, makes a very clear distinction between politicians such as the president of the United States, Donald Trump, or his Brazilian counterpart, Jair Bolsonaro, who have maintained denialist positions regarding the coronavirus with electoral zeal, and those who are good faith believe in these theories. The first claimed in January to have it fully under control, and the second came to say in March, when Brazil already had almost 3,000 infected and about 80 deaths, that the Brazilian should be studied by science, since he was not contracting the virus . In July, Bolsonaro himself had to admit that he too had been infected.

Alternative theories have found the perfect breeding ground in the information age. Estrella Gualda and José Rúas, researchers from the University of Huelva and Vigo, respectively, recently asked more than 1,000 people if they believed that the Government was hiding information from them. 68.1% of those surveyed responded that, most likely, the official version of events did not usually tell them the whole truth. This also results in a systematic distrust of the information they receive through the media, whether they are traditional, such as the paper press, radio or television, or digital, such as the Internet. “It is difficult to imagine effective strategies to reverse the high tendency to mistrust information,” the study concludes.

More than a third of Americans believe that global warming is a hoax, and more than half believe that Lee Harvey Oswald did not act alone in the assassination of John F. Kennedy. The reasons why this is so, recall researchers Karen M. Douglas, Robbie M. Sutton and Aleksandra Cichocka in their study The Psychology of Conspiracy TheoriesThey have to do with something as old as the human being himself: giving a manageable, simple and concrete explanation to complex issues.